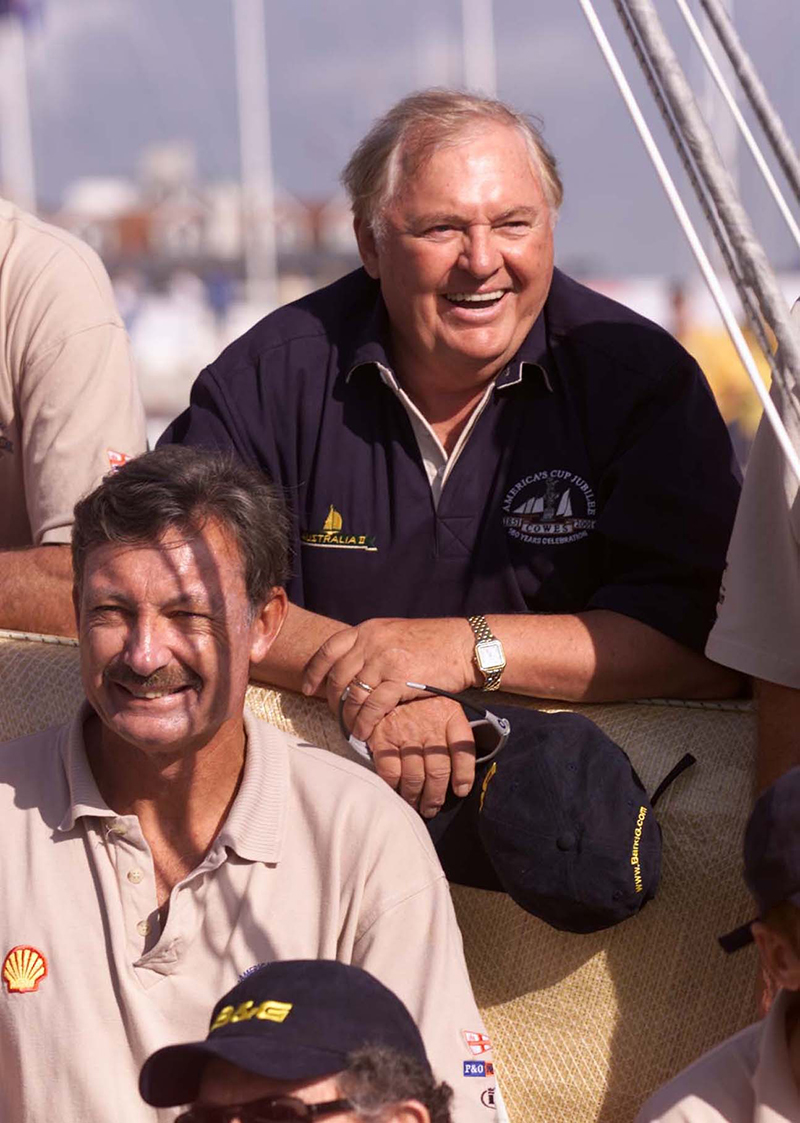 Business tycoon and former Australian of the year Alan Bond rode one of the most spectacular corporate roller coasters of the 1980s.

The 77-year-old entrepreneur died in a Perth hospital on Friday after complications during a triple-bypass operation.

But the controversial businessman’s life was celebrated and remembered by family and friends on Friday.

“To others, dad was a larger than life character … he really did experience the highs and lows of life,” son John Bond said outside Fiona Stanley Hospital in Perth.

“To us, however, he was just dad, a father who tried his best to be the best dad he could.”

In a working life that began in a sign-writing business in 1959, Mr Bond rose to prominence as a global entrepreneur and a symbol of Australian can-do enterprise.

He established a company that grew from nothing to one that brewed most of the beer in Australia, that owned nickel mines in Queensland, a national television network and the world’s most expensive painting, among many other things.

Mr Bond graduated from a spot of teenage burglary to become the greatest fraudster in Australian history and one of the country’s most celebrated corporate criminals.

His financial trouble began to emerge in 1989, when English businessman Roland “Tiny” Rowland exposed his business empire in a 93-page document that showed it was insolvent and trading illegally.

Mr Bond was declared bankrupt in 1992, with personal debts amounting to $1.8 billion.

In 1991, Mr Bond was convicted (later acquitted) of theft.

It would be a brief reprieve: he was jailed in 1997 for four years for stealing $1 billion from Bell Resources to prop up his failing business empire.

That, along with three years for a dodgy art deal and a raft of other convictions, made him the biggest fraudster in Australian history.

On his release from prison, rejuvenated and with memory restored, Mr Bond got back to work, amassing another fortune through investments in diamond mines and oil companies in Africa.

Mr Bond became the first non-American to win the once coveted America’s Cup sailing trophy in 1983, an exercise that led to the birth of an icon that will well-and-truly outlast him – the boxing kangaroo.

Friend John Bertrand may have been the skipper, but it was Mr Bond’s money that played a crucial role in Australia II’s historic bid to break the longest streak in world sport.

Mr Bond bankrolled the 1983 challenge as part of a syndicate, as well as three previous bids, to become the first international team to win the America’s Cup in its history.

Mr Bertrand on Friday called his friend “an amazing optimist”.

Australian of the Year

Bankrolling Australia’s first two challenges at the America’s Cup proved the catalyst for the businessman to be named Australian of the Year in 1978 (alongside Galarrwuy Yunupingu).

The honour would be fleeting. It was stripped from him in 1997 when revelations of his corporate criminality came to light.

One of the worst of Mr Bond’s acquisitions was the ailing American brewer G Heileman, for which he paid $1.26 billion in 1987, around three times what it was worth.

Heileman, Mr Bond figured, would be the perfect vehicle to launch his local brewing assets – Swan, Castlemaine and Tooheys – in the US market.

It turned out to be merely another symptom of an incurable condition which caused Mr Bond to do big deals, then juggle his increasingly massive debt to pay for them.

In the same year he bought Heileman, Mr Bond also made the most expensive art purchase the world had ever known.

But the $US54 million he paid for Vincent van Gogh’s Irises was typical of his unusual deals, its purchase having been financed to the tune of around $US27 million by the auctioneer Sotheby’s.

Bond never paid them back, and the painting never graced any of his homes.

His penchant for fooling around with fine art would later lead him to the low point of his life.

Bond meanwhile struck another deal during the same period that typified his doubtful business acumen and became part of Australian business folklore.

The purchase from Kerry Packer of the Nine Network for $1.05 billion, and its later sale back to Mr Packer for $300 million was a dream transaction – but not for Mr Bond.

In 2000, Mr Bond’s eldest daughter, Susanne, aged 41, was found dead in her home in the upmarket Perth suburb of Peppermint Grove from an accidental prescription drug overdose.

Just more than a decade later, his second wife Diana Bliss suffered a depressive illness for months before was found dead in the swimming pool of the couple’s Perth home in 2012.

Amber Heard’s sister and friend give evidence
‘Should have been a penalty’: Boy crash-tackled by PM gives his verdict
Russian Google to file for bankruptcy
Man arrested at NSW school for bestiality
Concern about COVID-19 deaths in aged care
Oceans hotter and more acidic in 2021 as sea levels, human-induced greenhouse gases rise: WMO
I’m not the cabinet leak: Hockey
Today's Stories