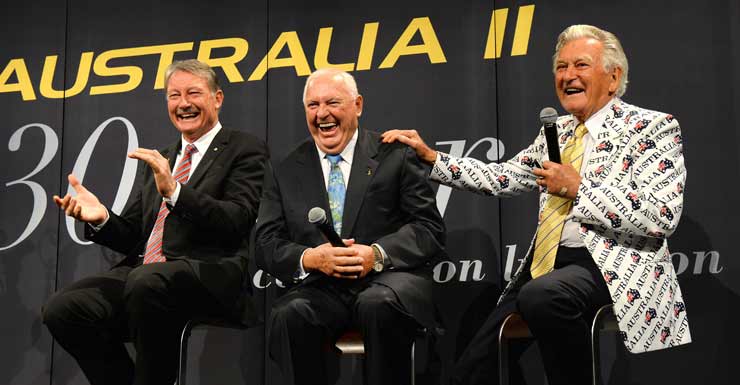 Business tycoon Alan Bond is among family and friends as he remains stable, but in an induced coma on life support in Perth.

The businessman, who served time in jail for siphoning off $1.2 billion to prop up his ailing Bond Corporation, has been unconscious for the past 24 hours after a heart operation.

According to a statement from the Fiona Stanley Hospital, Mr Bond was transferred there after an operation to replace a heart valve on Tuesday became a triple bypass. Mr Bond is in intensive care, according to the hospital.

Messages of support have flowed in from friends, according to a statement from Mr Bond’s family.

“He has been essentially stable for the last 24 hours and we take some hope from that,” they said.

“The family has been overwhelmed by messages of support and it is truly appreciated.”

Mr Bond’s first wife Eileen is rushing to Perth from London to be with her former husband and their three children.

She was due to arrive on Thursday afternoon.

“We’re praying and hoping that he pulls through this,” Ms Bond told AAP on Wednesday.

The skipper of Australia II, John Bertrand, who sailed the yacht to victory in 1983 to win the America’s Cup for the first time, said Mr Bond was “a fighter”.

“You know, he is a fighter, we know that, he never gives up but he was going in for a replacement heart valve and it hasn’t turned out as one would hope,” Mr Bertrand told the Nine Network on Thursday.

“Hopefully he will come through it but to be honest it doesn’t look good, doesn’t sound good.”

Mr Bond funded the successful America’s Cup win which took the prize from the New York Yacht Club for the first time in 132 years.

Mr Bertrand said he was feeling “reflective” given Mr Bond’s condition, which the family had described as “not good”.

“I’ve known Alan for a long, long time and he has had his ups, of course, and his downs,” Mr Bertrand said.

Mr Bond was lauded as a national hero, including praise from former prime minister Bob Hawke.