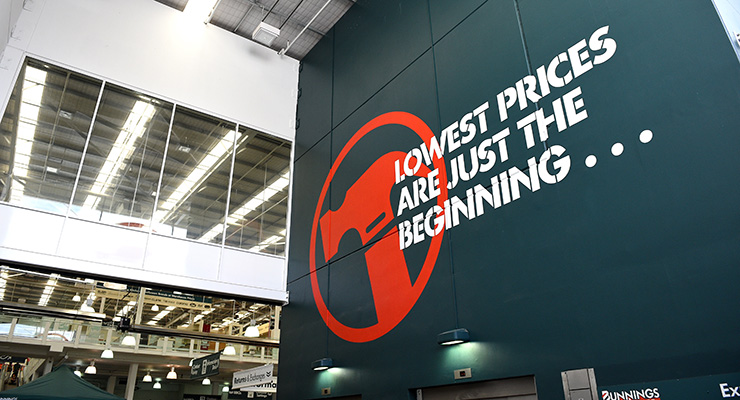 Bunnings is more than a gigantic hardware store.

Its canyon-esque aisles whisper to you of self-reliance and ruggedness – if not quite suggesting a log cabin of your own construction then at least the sort of barbecue a man can be proud of.

• What are the secrets to Aldi’s super low prices?
• Pay packets: how does your wage compare?

Once you’re over about 26 it seems to slowly turn into a refuge, a bit like Thoreau and his woods. There’s always a sausage sizzle out the front on weekends and it has become an Australian institution.

Never mind that it is based on an American big-box retailing model, or that it has only been a national chain since 1994, after it bought out McEwans hardware, closed most of the outlets, then sold itself to mega conglomerate Wesfarmers.

The reason there are now over 300 Bunnings nationwide is that the store is so good. We don’t begrudge the many hours spent lost in its chasms and nooks. It’s like that because it is cheapest. Right?

A tentative Google suggests, um, well, not always. Take a 33 litre cooler. At Bunnings it’s $54.95, but nearly half the price at Masters at $30*. Comparing items by brand at Bunnings can be tricky because they stock most items exclusively. While those two coolers were different brands, here’s an example of an identical item which costs far less elsewhere – 66 per cent less to be exact. (The top one is from Officeworks, the lower one is Bunnings.) There are three big tricks that Bunnings uses to reinforce the widely-held belief they are so cheap.

Apparently the theory is a range of irregular and specific numbers make customers think the price has been ratcheted down as low as it possibly can be. Rather than having all the prices in the format $X9.99, the prices imply Bunnings takes the trouble to price everything at its minimum.

This is signalling. Bunnings has ads on during high-rating shows – they are not being cheap on their marketing budget. But if they deploy great cinematography and a highly-polished vibe, like you might see in a car ad, it creates the impression they are wasting money on ads.

Instead the ads look cheap and cheerful. The same motivation is behind The Good Guys using their staff in ads even though they too are a heavy-hitting national chain. Baker’s Delight use their staff in ads to signal something else – that the bread is made by real people, not a factory.

The signalling effect even flows through to the way stores are designed. It’s not unique to Bunnings: here’s Costco founder Jim Sinegal talking about his store’s budget vibe:

We try to create an image of a warehouse type of an environment … I once joked it costs a lot of money to make these places look cheap. But we spend a lot of time and energy in trying to create that image.

But the claim is a strong one. The only way Bunnings can get away with it is their price-beat guarantee: “Find a lower advertised price and we’ll beat it by 10 per cent.”

That is an extremely clever business plan. While we might think we could mock up an ad that offers something very cheaply and trick Bunnings into giving them a deal, the reality is the store would probably accept that risk.

In fact, they would probably rather more people took them up on the price-beat guarantee. Let me explain.

The effect of the price-beating offer is to permit price discrimination. They can sell things at a higher price to people who don’t bother shopping around, and at a lower price to those that care about price. That means they charge different prices to different types of people, just like a hotel or airline does, maximising yield.

But the real killer of a price guarantee is the way it discourages other chains from discounting and promoting. If I run a business called Australia-wide Hardware, why would I put an ad on the radio announcing ‘Cordless Drills – Now 30 Per Cent Off!?’

I know customers can and will still go to Bunnings.

Offering to beat advertised prices is very close to being anti-competitive behaviour, as it can cause all firms to raise prices. From the great store of knowledge we know as Wikipedia:

While a store with price matching guarantees has no fear of losing customers to rivals’ price cuts, it has every incentive to raise its own price to charge a higher price to its loyal customers. It is an anti-competitive tactic that warns competitors not to attempt to steal market share by undercutting prices.

So, Bunnings is like any other retail operation, playing clever psychological games to disguise healthy mark-ups.

It had earnings of $618 million on revenue of $5 billion in the most recent six-month period, and contributed 30 per cent of Wesfarmers’ earnings before tax. Sales grew 12 per cent.

Wesfarmers is currently working on “actions and investments aimed at strengthening the Bunnings business and supporting future expansion” in order to help Bunnings contribute even more to its after-tax profits, which were, in the past six months, $1.4 billion.

And you, valued customer, are right at the heart of their plans.

* An earlier example had two 33 litre coolers. While we stand by it as being indicative, some readers said the two items were not the same brand and therefore should not be compared. We have updated the story to show an item which is identical to one sold elsewhere.

How Bunnings’ prices are designed to nail customers