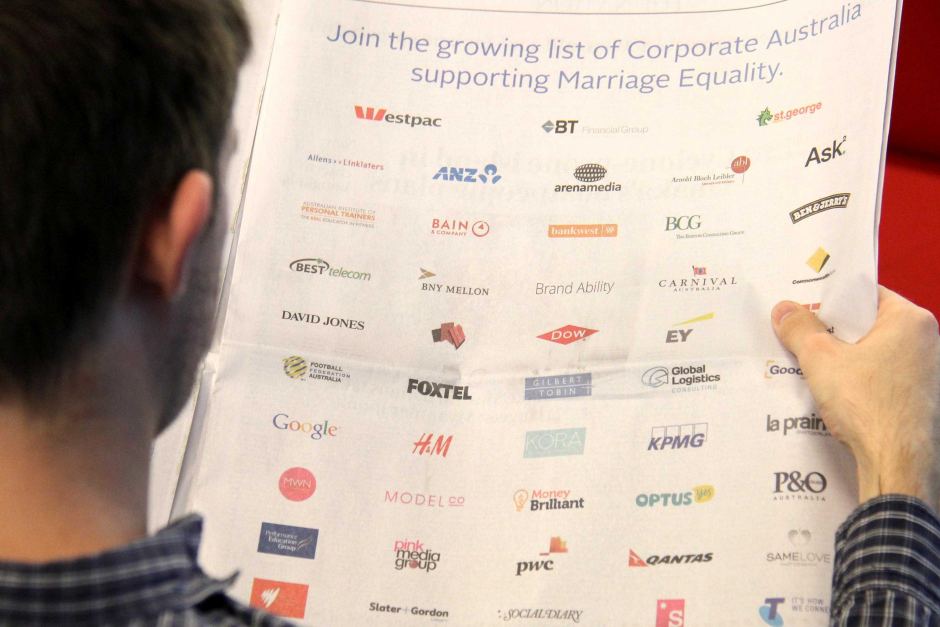 Fifty-three of Australia’s biggest businesses have joined forces to support marriage equality, proudly displaying their intentions in a national newspaper.

A full-page ad was published on page five of The Australian on Friday, with corporations including Google, Qantas, Optus and the ANZ and Commonwealth banks putting their names to a list of companies backing gay marriage.

Others supporters included law firms Slater and Gordon and Gilbert and Tobin, and the Football Federation of Australia.

This comes as Opposition Leader Bill Shorten confirmed Labor would move a bill to legalise gay marriage in parliament on Monday, granting MPs a conscience vote on marriage equality.

Prime Minister Tony Abbott said on Wednesday the decision on whether or not Liberal MPs should have a free vote on the issue would be decided in a party room debate.

He also indicated there should be bi-partisan support for the issue.

But his sister Christine Forster, who is gay, said on Thursday same-sex marriage would be legal in Australia by the end of the year and her brother “knows it is inevitable”.

The gay marriage initiative was organised by AustralianMarriageEquality.org who, according to its website, are calling corporate organisations “to add their voice to the growing call for equal rights for all Australians”.

On May 22, the Republic of Ireland held a referendum to sanction same sex marriage. A ‘yes’ vote was supported by the government, major political parties and the community.

These Australian companies back marriage equality