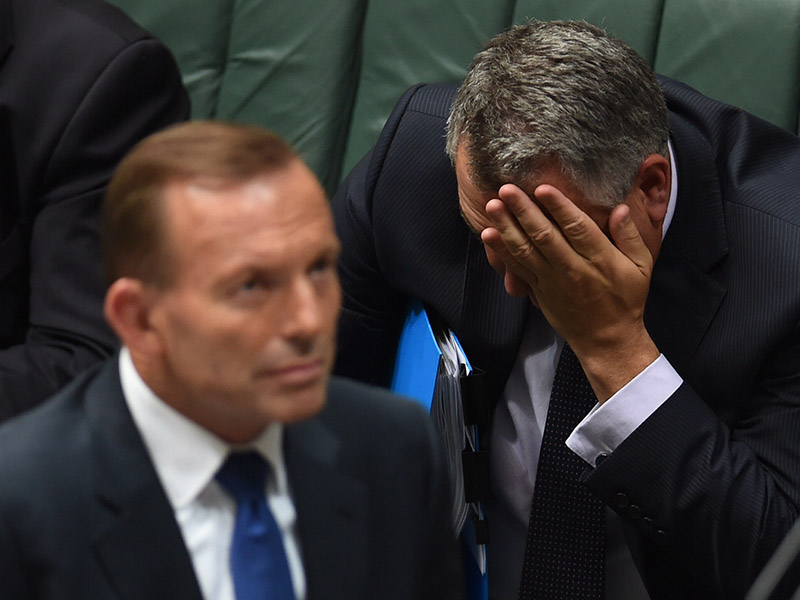 Traditionally, federal parliament doesn’t sit during the week after the budget. Party leaders use the short break to dash across the country in a mini-campaign, posing for selfies and pressing the flesh while trying to get through to voters with catchy sound-grabs for the media.

This year, the Abbott Government doesn’t want us to think too much about the budget, or for too long.

The economic statement was deliberately crafted to be a two-week wonder, disappearing quickly from the front pages so we can move on to other important matters like the footy or who’ll win the next auction/challenge/round on reality TV.

So if you’ve tuned out from last week’s budget, that’s perfectly understandable. However if you want to get back up to speed on political happenings over the past week, here’s a quick review.

A pox on both their houses

According to focus group discussions conducted by Tony Mitchelmore, a Labor-aligned market researcher and campaign strategist, voters who switched from Labor to the Coalition last election described Mr Abbott as unimpressive, annoying, guarded, full of promises, misleading, bumbling and blokey.

Despite the poor perceptions of the Prime Minister, Mr Mitchelmore found voters’ preference for political stability played to Mr Abbott’s favour. This was because the PM’s brush with political death in February counterintuitively reminded voters about the leadership disunity that wracked Labor during the Rudd-Gillard years.

According to Mr Mitchelmore, there’s no greater emotional commodity that can be offered to voters right now than “stability, security, certainty”.

This will be unsurprising but unwelcome news for the Liberal Party’s leadership aspirants.

Meanwhile, Prime Minister Tony Abbott continued to exploit that need for stability, security and certainty by holding fast on the asylum seeker issue.

The world has looked on in horror at the abandonment of Bangladeshi migrants and Rohingya refugees stranded at sea.

However PM Abbott remained resolute in his refusal to help, saying “Nope, nope, nope” when asked if Australia would resettle any of the boatpeople.

The PM justified the triple-decker rebuff on the grounds that “we are not going to do anything that will encourage people to get on boats,” telling refugees that if they want a better life, they “need to come through the front door”.

That would have gone down well with the 61 per cent of Australians who believe the Government is taking the right approach or is too soft in its approach to asylum seekers.

Less obvious was the reasoning behind one element of the PM’s budget sales pitch, namely the suggestion that businesses could “try before you buy” when hiring the long-term unemployed.

While the comment may pale in comparison to other prime ministerial mis-speaks such as “shit happens” and “women of calibre”, it was particularly callous and out of touch to liken people to a toaster or washing machine when they’re probably already demoralised by not being able to find a job.

Meanwhile, the PM wasn’t the only Government MP who had to answer for a misjudged throw-away line. In fact, Treasurer Joe Hockey and Social Services Minister Scott Morrison were still trying to mop up the mess they made last week by describing mothers as rorters and frauds for legally accessing both public and privately-funded parental leave schemes.

Particularly troublesome was the revelation that the wives of Finance Minister Mathias Cormann and Assistant Treasurer Josh Frydenberg had both received payments from the taxpayer-funded scheme.

However instead of cutting his losses on the matter as a PR nightmare, Treasurer Joe Hockey danced an ungainly jig around it instead.

The low point (so far) was his suggestion that the ministers in question hadn’t declared their families had “double-dipped” because the wives may have kept their husbands in the dark.

He also foreshadowed the Opposition’s preparedness to support the Government on $2.4 billion worth of budget savings.

There’s always a risk in an opposition declaring its policies a long way out from the next scheduled election, and in differentiating itself from the Government on superannuation Labor has set the scene for a long war of attrition on how Australians save for their retirement.

Labor has also made its own life difficult on funding for the states on health and education.

The Abbott Government plans to reduce that funding by $80 billion over the next decade, but Mr Bowen declined at the NPC to commit Labor to restoring that funding on the attainment of government.

It’s difficult to see the political wisdom in this refusal, given that it weakens one of Labor’s strongest points of attack on the Government.