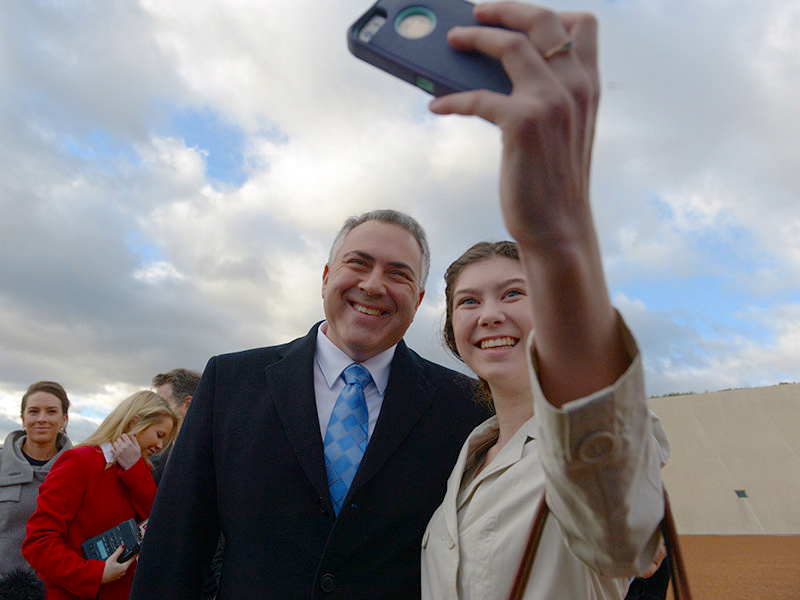 That’s all from our live blog of the budget build-up. We’ll have all the big news as it unfolds from Joe Hockey’s second federal budget.

In other news, Nepal has been rocked by another large earthquake, just weeks after a quake killed more than 8,000 people. Read the story here.

Excitement building here in The New Daily office for the big reveal. We’ll have all the news from Joe Hockey’s second budget from 7:30pm.

twitter while all the journos are in budget lockup pic.twitter.com/X88OJ6wcWm

In honour of #budget2015 lockup, I have applied MAXIMUM DRAMA filter to this pic. #budget drama! pic.twitter.com/dqwdUMtwYk

Missing my budget lockup days. Tried to explain how awesome it is to an office colleague, ‘Err, that actually sounds horrible Ange’

4:06pm Still quote of the day so far, Senator David Leyonhjelm weighs in with this beauty: “The budget will be like giving a gorilla a Brazilian. There will be plenty of hair left.”

3:52pm We’re wondering how long it’s been called the Budget ‘lockup’? Does anyone have any idea how this term came to be used? It conjures images of a young Sylvester Stallone being terrorised by a moustachioed Donald Sutherland.

3:26pm Good to see some of the journos ensconced in the Budget lockup are maintaining their sense of humour.

I’m sticking loads and loads of paper down the toilet in the budget lockup. — Bernard Keane (@BernardKeane) May 12, 2015

2:45pm  PM Tony Abbott has invoked “changing circumstances” to justify his changes to their signature policy going into the election, the gold-plated paid parental leave scheme, to a substitute that would kick nearly 50 per cent of women off the scheme. 2:26pm A fair few condolences to start proceedings here. As well as Peter Walsh, the House has farewelled long-time Liberal member for Warringah Michael MacKellar, arts administrator Betty Churcher and now cricket doyenne Richie Benaud. 2.01pm Question Time We start off with condolences for Hawke era minister Peter Walsh and a moment of silence. 1.58pm The Bible, the focus of all of our efforts today. It’s not much to look at is it?

1.32pm While most of the Canberra press gallery is locked away with piles of white books that hold the future plans for the nation, Greens Leader Richard Di Natale delivered his vision for the coming budget at a press conference. “We really think its critical that the government address the issue of revenue and doesn’t make the same mistakes of the previous budget which is continue to take money from those who can least afford it.”   “We’ve got to see climate change action. It’s critical. I won’t be holding my breath but it’s important that the biggest challenge of our era… needs to be dealt with in the budget.” 11.48am Our reporting team is in Canberra breathing in the air of a buzzing Parliament. Jackson Stiles sent us this report: On budget morning, the corridors of power narrow to a single line, combining government and opposition MPs, power brokers, industry figures and courtesans.   Their goal is Aussie’s cafe. They shuffle as a column that winds out of the single aisle and spills outside.   The New Daily finds former treasurer Wayne Swan buying a coffee, perhaps recalling how he felt presenting budget papers in the past. Today, he looks far more relaxed than Joe Hockey. 11.34am REVEALED: Bill Shorten’s cake was a Costco number we assume was bought at the Canberra airport store of the global bargain bulk-buy warehouse chain. It feeds 48, which is slightly under the 80 Labor MPs in the parliament. We assume there was some collective bargaining going on to secure a slice.

For comparison here is the knifeless cake in the caucus.

10.59am Anika Buining, the show-stealing 16-year old who selfie-bombed the Treasurer this morning has spoken to The Australian. Ms Buining told The Australian she was in town for a Rotary trip and had yesterday secured a selfie with Foreign Minister Julie Bishop.   “That was pretty exciting. She gave me a hug and said I was adorable, so that was quite cute,” she said.   “I’m not sure that I’m a big supporter (of Mr Hockey), so to speak, of everything that he has to say, but I’m willing to listen.   “I think it’s nice that he acknowledged someone from a younger generation.   “My inspiration for a journalist is (ABC presenter) Annabel Crabb, so I’m really, really hoping I get to meet her before lock-up.” We hope Ms Crabb finds the time to get in touch, but her fame is already cemented forever in official transcripts.

10.46am If you’re scratching your head at the Treasurer’s announcement early this morning that the budget would wind the deficit back well below predictions topping $46 billion this financial year, Chris Richardson from Deloitte Access Economics has some insight. The iron ore price has bounced back slightly, which means extra mining royalties are expects. “Better news on iron markets gives the budget some very important breathing space,” Mr Richardson told Fairfax Media.

10.39am A new theory on why the cake had no candles: they would have set off the sprinklers.

@murpharoo Cake might have lacked candles because using them in Parl House brings the fire brigade – as I (involuntarily) discovered in 2010 — Alastair Lawrie (@alawriedejesus) May 12, 2015

10.21am Budget commentary has begun in earnest. The Internet Society has criticised the government’s pre-budget announcement that it would hand ISPs $131 million for holding on to their customers’ metadata for two years, in case law enforcement wants to look at it later. “The feedback we are giving them is demonstrating that the Government has greatly underestimated the work involved. Therefore, we believe that it is too early to be capping the amount of money allocated to the industry’s cost recovery,” said Laurie Patton, CEO of the Internet Society which is advising the government on implementing the metadata retention plan. 10.06am Was the cake a fake? Guardian photographer Mike Bowers was in the caucus room when he observed that the cake has no candles and there were no knives. Indeed, this picture shows a tempting treat without a polite way to divvy it up. We’ve heard of political feeding frenzies but maybe this one happened after the cameras had left.

9.48am Labor Leader Bill Shorten has just finished a caucus meeting where he praised his party’s MPs for their fight over the past year. “It was not inevitable 12 months ago that the budget of unfairness – it was by no means a sure thing that it would be defeated,” he said. “Twelve months ago they were flocking to say this was a great budget, that it was a budget for its time. The truth is it was a budget for the rubbish bin. “This Liberal budget has been defeated thus far because of the choices that Labor has made. “Australians though still experience the calamitous and the shocking damage to the national confidence of the 2014 budget. Productivity is down. Unemployment is up. We see growth flattening. “The first budget of the Abbott and Hockey government last year did show their true colours. It showed their true intentions when given power.” And he ended by telling his troops the fight must go on. “A leopard cannot change its spots. Tony Abbott and Joe Hockey may be changing their tactics, but they are not changing their destination for where they want to take Australia.” “It falls to us once again to pick up and fight for the future of this country.” “I look forward to the fight.” 9.36am Today is Bill Shorten’s birthday. We wanted to get him a cake but maybe this video will serve in its place. 9.28am The budget has been printed, and The Australian’s editorial has urged the Abbott Government to stay the course set out in 2012 to end the age of entitlement.

The admirable objectives outlined in Mr Hockey’s 2012 speech about ending the age of entitlement must not be abandoned just because of political misadventures, mishaps and sabotage. Rather, building on this theme provides the route for the Treasurer to recover his standing and give this budget and others a sense of purpose.

8.26am We’ve heard from the Treasurer, and the new three word slogan you can expect to hear over-and-over today is “responsible, measured, fair”. 8.11am A woman has just photo-bombed a press conference outside Parliament House with Treasurer Joe Hockey to take a selfie with him. It seems to have taken him by surprise as he was optimistically selling the budget to a skeptical press pack. The 16-year old woman, identified as Anika Buining from Hunter Valley Grammar School, was dressed in a long coat and was heading into parliament.

Treasurer @JoeHockey has his pre-Budget press conference interrupted by a girl desperate to take a selfie #auspol https://t.co/fMIWO8vy9z — Sky News Australia (@SkyNewsAust) May 11, 2015

We’re starting our blog, check in throughout the day for a blow-by-blow account of the lead-up to the Government’s most important budget so far.

Budget circus rolls in to town