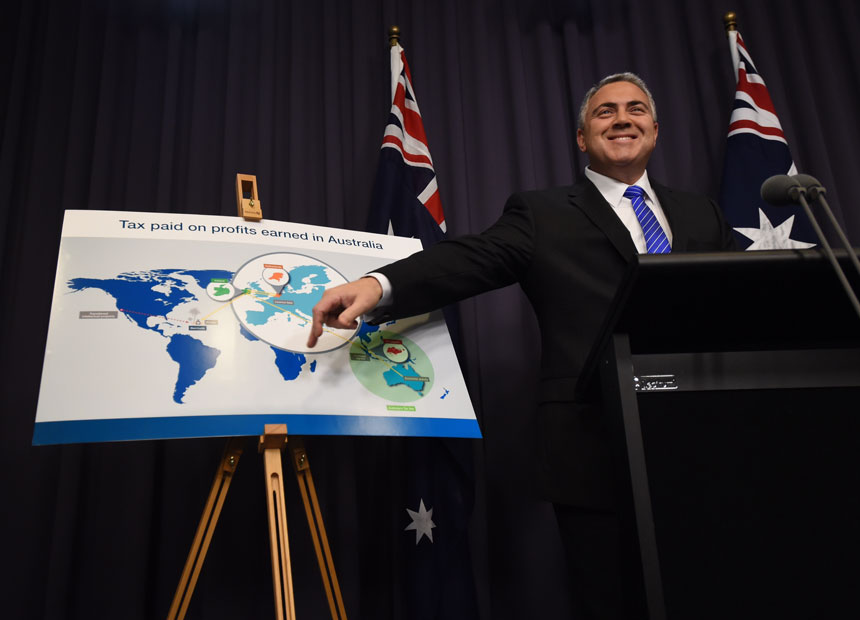 A multi-billion dollar legal battle is set to erupt after the Abbott government on Monday announced a crackdown on global companies such as Google, Apple and Microsoft that avoid paying taxes on revenue earned in Australia.

Treasurer Joe Hockey said the Budget would include measures to stiffen penalties on companies that divert local revenue to low tax countries.

The crackdown, which could boost government tax coffers by more than $10 billion a year, has emerged as a potential salvation for the federal government as it battles to rein in the budget deficit that has blown out to almost $50 billion.

While that’s probably good news for most Australian households, Mr Hockey also announced plans to extend the goods and services tax on all digital products purchased from offshore providers such as Amazon and Google.

Under this change – dubbed the ‘Netflix tax’ – all digital products such as electronic books, magazine subscriptions, movies, music and software programs bought over the internet will incur a 10 per cent GST.

Mr Hockey said around $350 million would be collected through the measure over the next four years, and all of it would be passed on to state governments.

“It is plainly unfair that a supplier of digital products in Australia has to charge GST and an off-shore supplier does not,” he said.

“When the GST legislation was drafted it did not anticipate the massive growth in the supply of digital goods like movie downloads, games and e-books from overseas.”

Australian retailers such Harvey Norman and Myer have been agitating for an extension of the GST to online vendors for almost a decade.

Mr Hockey refused to say how much the government expected to collect from big corporate tax avoiders, but acknowledged that it ran into the billions.

“It is billions of dollars obviously,” he said. Early last month, a Senate committee was told that in the 2012 financial year 10 international companies diverted more than $31 billion of revenue made in Australia to low-tax countries such as Singapore, Ireland and Bermuda.

As a consequence, the Australian Tax Office missed out on up to $10 billion of corporate income tax payments.

The government is set to release draft laws targeted at 30 companies who were found by the ATO to have engaged in sophisticated revenue diversion strategies.

“These companies are diverting profits made in Australia away from Australia to low- or no-tax jurisdictions,” Mr Hockey said.

Mr Hockey revealed that the ATO would be given new powers to extract tax payments from companies found to have engaged in the tax rorts.

The legal changes come after the ATO officials were “embedded” in the operations of 30 companies to understand how the tax strategies were being deployed.

Unpaid tax bills could run into tens of billions

Although Mr Hockey refused to quantify how much the government expected to recoup through the crackdown, the evidence given to the Senate committee suggests the ATO may be able to issue aggregate bills for at least $50 billion. He said the ATO had “identified the sums that have been shifted”.

The wording of Mr Hockey’s statement issued on Monday suggests that the ATO will be given retrospective powers.

“The Tax Commissioner will have the power to recover unpaid taxes and issue a fine of an additional 100 per cent of unpaid taxes plus interest,” he said.

Representatives of the Australian operations of Apple and Google told the Senate inquiry earlier this year that most of the intellectual capital and trading platforms of their local businesses had been developed offshore.

This raises an argument that many online purchases were, in fact, earned and executed overseas.

Mr Hockey also signalled that the government would announce further measures to tackle internet-based fraud in the next month.

“There will be other matters, quite frankly, that we’ll be announcing in the next few weeks in relation to net fraud,” he said.

Amber Heard’s sister and friend give evidence
‘Should have been a penalty’: Boy crash-tackled by PM gives his verdict
Apple sued over ‘ear shattering’ AirPods alert
Russian Google to file for bankruptcy
Man arrested at NSW school for bestiality
Concern about COVID-19 deaths in aged care
The price of beauty: the dark side of nail salons
Today's Stories

Joe Hockey has tech giants squarely in his sights