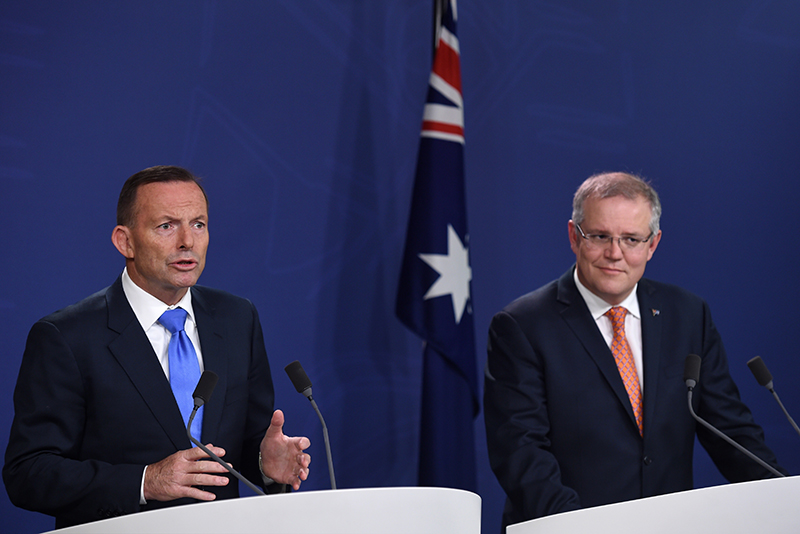 Middle-income earners look likely to bear the brunt of this year’s budget savings, as Treasurer Joe Hockey shifts his sights away from lower-income earners in his efforts to return to surplus.

Two of the biggest budget-saving measures announced so far – relating to parental leave and the age pension – notably affect middle Australians, leaving both lower income and very wealthy Australians either untouched or better off.

• Google, Apple target in tax crack down
• Budget 2015: what we know so far
• Greens ‘open’ to passing budget

This strategy suggests Mr Hockey has abandoned last year’s strategy of making savage cuts to welfare. What savings can be clawed back, it seems, will be clawed back from the middle class.

Under the changes to the age pension, couples who own their own home and have more than $451,500 in assets will have their part pension reduced.

Those with more than $823,000 in assets, meanwhile, will receive no pension at all. Previously, the cut-off point was $1.15 million.

The government estimates that the new cut-off point will result in 91,000 retirees losing their pension, and a further 235,000 having their part pension reduced.

This contrasts with last year’s pension-related measures, which saw an unfavourable change to indexation and an increase in age pension eligibility age. Both measures would have hit low-income workers hardest.

But while the latest measures do not target the most vulnerable, they also leave Australia’s very wealthiest echelons continuing to enjoy huge superannuation tax concessions.

The other headline measure – also announced by Mr Morrison in the absence of Mr Hockey – was the the $3.5 billion ‘Jobs for Families’ childcare package.

The aim of the package is to encourage more parents to go back into the workforce, and thus theoretically increase the productivity of the nation.

To help pay for this generous program, the government will clamp down on ‘double-dipping’ – that is, disallowing parents from claiming parental leave both from the government and from their employer.

The government estimates this would save $1 billion over forward estimates – though that rests on the assumption that employers will continue to offer paid parental leave.

But Kate Carnell of the Australian Chamber of Commerce and Industry said this was a big assumption.

“It’s hard to see why employers would continue to pay parental leave if it meant the government stopped paying, and they were simply footing the bill for the government,” she told The Guardian.

The result would be either that employers stop paying the leave altogether – leaving the (presumably) middle to upper-middle income employees worse off – or they find another way to incentivise employees to stay on.

What this strategy tells us

One of the most striking things about these two measures is that they are targeted to benefit those at the bottom of the income scale.

This shows the government has concluded that the harsh cuts to social services that characterised last year’s budget – such as the GP co-payment, the six-month delay on dole payments to the under-30s, and the changes to the age pension indexation – are politically unviable.

However, it also suggests the government is unwilling to touch the generous tax concessions it pays to very wealthy Australians, in particular superannuation tax concessions and negative gearing.

With the two major options for budget savings – massive welfare cuts and the abolition of generous tax concessions – off the table, Mr Hockey has no option but to scrap around for piecemeal savings.

If these two previews are anything to go by, these piecemeal savings will come from middle-income earners.

Why middle Australia will pay for budget deficit