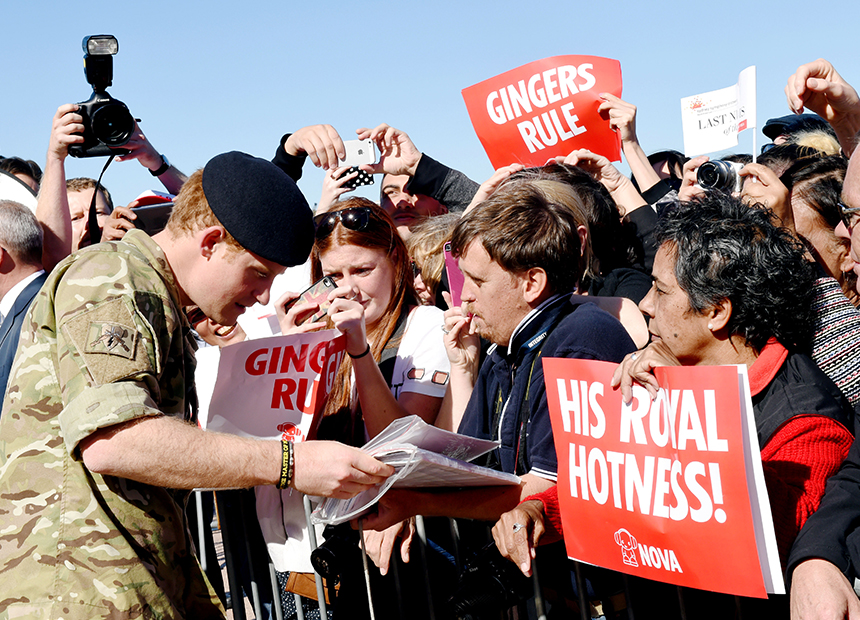 While England celebrated the new addition to their royal family, Australians have been enjoying Prince Harry’s company over the past month.

Captain Wales – as Harry is known in the military – bid a fitting farewell to his secondment in the Australian Army with a Sydney Harbour training mission before a public meet-and-greet on Thursday.

Prince Harry thrilled Sydneysiders at the Opera House, meeting schoolchildren, war veterans and starstruck teenagers in an event to mark the end of his month in Australia.

• Royal princess: what’s the significance of her name?
• Did Kate and Will fake the whole pregnancy?

Diehard royal fans waited hours to catch a glimpse of the 30-year-old prince, who was accompanied by NSW Premier Mike Baird for the occasion.

“I am really glad the rain has stopped,” Prince Harry said at a news conference.

“After a busy couple of weeks, it was nice to have a chance to speak to members of public as opposed to being locked in and working hard.”

The Prince was full of praise for Australia, hinting that we haven’t seen the last of him.

“It has been fantastic and everyone has been amazing and I have felt unbelievably welcome,” he said.

“Once again you are going to struggle to get rid of me.”

Naturally, the crowd was keen to know Harry’s thoughts on his new niece Princess Charlotte, and being bumped down one rung on the royal ladder.

“I have been given a hell of a lot of cuddly toys from this morning and other things,” Prince Harry said.

“So, yeah, I look forward to it. I am looking forward to meeting her. She is beautiful.”

The Prince also visited Sydney’s Macquarie University Clinic to meet a British soldier who is receiving specialist treatment after having both legs amputated.

British Lieutenant Alastair Spearing, 31, lost both his legs on a tour of duty in Afghanistan in 2011 and underwent specialist major surgery last month to help with prosthetic legs.

Prince Harry said he was recovering well and in a positive frame of mind.

“The surgery went really, really well. [It was] a little bit longer than expected but these guys are learning constantly,” he said.

“He is over the moon and thrilled to bits to be up and walking again on a new set of legs.

Prince Harry is a supporter of a number of military charities, particularly Britain’s ‘Walking With The Wounded’ which aims to help injured returned serviceman with re-education and re-training.

When he returns to England after an official tour of New Zealand he will begin working on a new project with the charity.

Prince Harry will arrive in Wellington on Saturday and spend time in Invercargill, Stewart Island, Christchurch, Linton, Whanganui and Auckland.