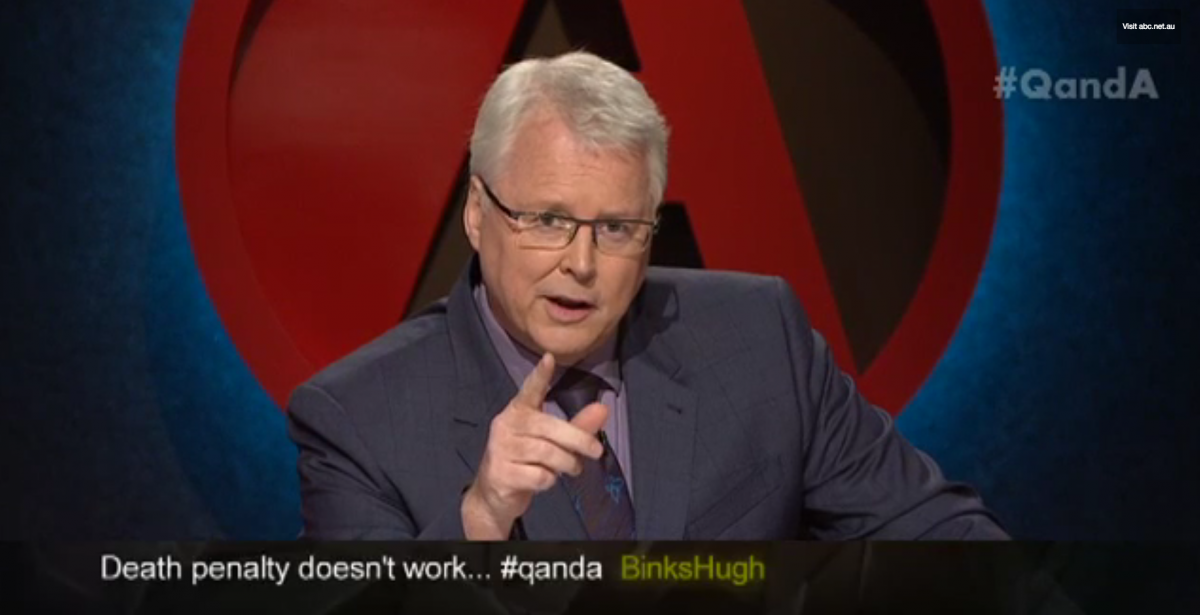 Mr Jones interrupted the flow of debate after receiving a message on his autocue saying Andrew Chan and Myuran Sukumaran had been granted a May 12 hearing.

Confusion reigned supreme as two friends of Mr Sukumaran’s in the audience asked the Q&A host if that meant the men’s executions would be delayed.

“That’s wonderful news, but does that mean they are not going to go ahead with tomorrow? Is that what it means?” one of Mr Sukumaran’s friends asked.

“Because no one is talking to the family.

“They had a harrowing day, delayed for over three and a half hours and only allowed to see the boys for five hours.

Both Mr Jones and panellist Liberal senator Arthur Sinodinos said they believed it would delay the executions, which could happen as early as Wednesday morning.

Opposition deputy leader Tanya Plibersek baulked at the report, saying it was unclear what the appeal would mean for the men.

“I’m sorry Tony, having just read the autocue I think we have to be very careful,” Ms Plibersek said.

“We don’t know the full range of information. We might hear updates through the course of the show or afterwards.”

Indonesia’s government is determined to proceed however, with Attorney General H.M. Prasetyo previously saying a challenge would have no bearing on the executions.

Speaking on Sky News on Tuesday morning, Foreign Minister Julie Bishop urged Indonesian President Joko Widodo to allow appeals before the court be concluded before the men are killed.

“There are many serious allegations that have been made and should be subject to a judicial review,” Ms Bishop said.

“I don’t believe the Indonesian government could be in any doubt about the way the Australian government feels about this matter.”