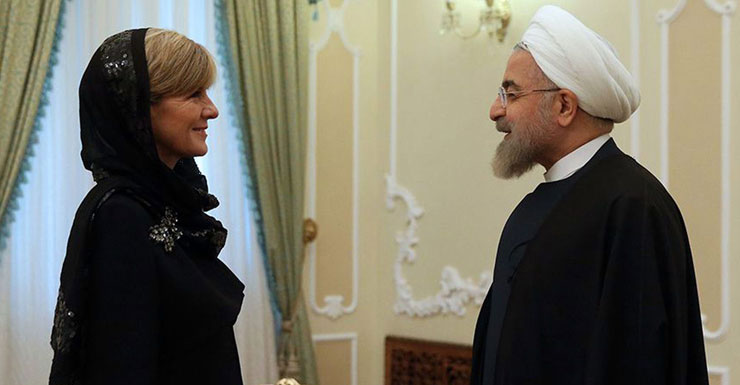 Foreign Minister Julie Bishop should have “stood up for Western values” and not covered her head when visiting the Iranian president on a diplomatic mission, conservative commentator Andrew Bolt has said.

Ms Bishop was in Tehran to ask the Rouhani Government to repatriate Iranians, who came to Australia seeking asylum.

Footage of Ms Bishop in either a hat or a headscarf emerged from the meeting, which prompted Mr Bolt to say “I thought that looked frankly ridiculous”.

“Should she have stood up for western values?” he asked Mr Abetz, who said he hadn’t seen the footage until appearing on the show. “Ms Bishop looks a picture, even with that hat on,” Mr Abetz said.

“Whether or not Iranian women believe this is the right cultural approach for women is clearly a question that would be in many of their minds, one would imagine.”

Prior to the meetings, Ms Bishop downplayed the dress code when asked about wearing the headscarf: “As a matter of fact I wear scarves and hats and headgear quite often as part of my everyday wear,” she said, as quoted in Fairfax Media.

Iran has been battling Islamic State in Iraq in a Government sanctioned military operation, and Ms Bishop said her talks with Iranian officials yielded an intelligence sharing arrangement.

A strict dress code exists in Iran, enforced by the morality police. The dress code demands women cover themselves completely when in public, but the face and hands can be exposed.

But Iranian women have challenged the laws by posting images of themselves with heads exposed in public on Facebook.