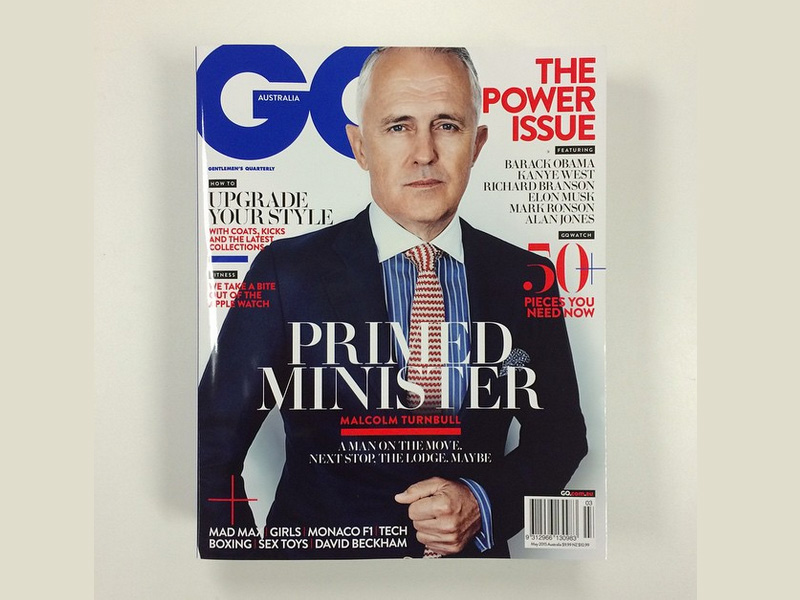 What do they all have in common? Gracing the cover of popular men’s magazine, GQ, of course.

In a special GQ “power issue” edition to be released on Monday, the 60-year-old Communications Minister appears on the cover, looking dapper in a striking blue shirt and red tie.

The popular politician sports a steely look under the provocative headline “Primed Minister Malcolm Turnbull: A man on the move. Next stop, the Lodge. Maybe”.

There can be little doubt the GQ cover will send tongues wagging, with polls consistently putting Mr Turnbull ahead of incumbent Tony Abbott as the public’s preferred prime minister.

The glamorous eight-page photoshoot is accompanied by a revealing interview, in which Mr Turnbull talks about his humbling upbringing to life in politics.

According to a report by The Australian, the millionaire businessman also comments on whether he would have contested the February leadership spill had it been successful.

“People would have been astonished if I hadn’t,” Mr Turnbull said.

The former opposition leader says he is comfortable in his own skin, even though he is disliked within his own party.

“If people find me persuasive or offensive that’s up to them, but I am comfortable in my own skin and I honestly never ask, ‘How can I change myself to be more appeal to people?'”

It would appear the Australian public likes you just as you are too, Mr Turnbull, with 35 per cent of Liberal voters and 48 per cent of Labor voters calling him their preferred leader, according to a Fairfax Ipsos poll.

The GQ edition goes on sale on Monday.