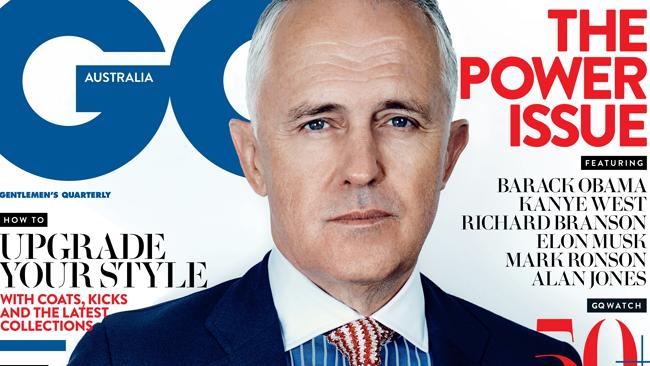 The embattled Prime Minister has only just put February’s failed leadership spill behind him, and now Mr Turnbull is on the cover of GQ’s ‘power issue’ under the headline “Primed Minister”.

With his steely glare, daring choice of tie and frankness about the leadership spill, you have to wonder if the Communications Minister is priming the pump for another tilt at the top job. The picture, however, was taken two years ago when the Minister was in opposition and has been dusted off for a recent interview.

Politicians have long used interviews and glamorous photoshoots to manage their reputations and make sure their message is delivered to voters, but do they also spell something more sinister?

The New Daily looks back at magazine spreads from the likes of Kevin Rudd, Tony Abbott and Pauline Hanson, and what immediately followed. Before Kevin ’07 there was Kevin, um, ’06. The Labor minister graced the cover of The Monthly in October 2006 for a very long article about his spirit guide, Dietrich Bonhoeffer, a German theologian who died in 1945. It’s a real page turner.

Just two months later he challenged Opposition Leader Kim Beazley for the Labor Party leadership and won. His work on Sunrise was also central to his rise.

Mr Rudd led Labor to a landslide election victory, ending John Howard’s long reign, and was praised by Time Magazine for his slick campaign. What happened next was less triumphant. While Ms Gillard said it was an opportunity to show “a different side” of herself, the spread was lampooned. You might even say her choice of props was a little wooly-headed. Rather that stitching up support, her leadership soon unravelled.

Less than a week later, Mr Rudd mounted his counter-challenge, taking the leadership back from Ms Gillard, which ultimately led to her retirement from politics, but lots more time for making scarves and beanies. Tony Abbott was praised for being formidable in opposition. He was a student boxer at Oxford University which explains the constant reference to his ‘pugilisitic’ political character. On the eve of the 2013 election he appeared on the cover of The Monthly, with, you guessed it, a boxing reference.

Sporting his ever-present blue tie, Mr Abbott gave the camera a steely gaze beside the headline “Pulling his punches”.

However, Mr Abbott did pull not any punches. He KO’ed Kevin Rudd and Labor just two months later at the September election. But since then, a string of broken election promises and a deeply unpopular first budget have left the PM’s standing among voters battered and bruised. But like a prize fighter who never throws in the towel, he even climbed up off the canvas earlier this year after his party delivered a painful blow to his leadership. The former One Nation leader and fish and chip shop owner returned from political obscurity in May last year for a glamorous photoshoot with Woman’s Day.

To celebrate the divisive politician’s 60th birthday, the magazine gave Ms Hanson a $5000 “mega-makeover”. The purpose of this spread remains a mystery, even to the magazine which published it.

While she denied in a subsequent appearance on Sunrise that she was “out there to impress anyone”, Ms Hanson announced her triumphant return to the helm of One Nation six months later. Despite her high profile (she served as Secretary of State in the Obama administration, was beaten to the Democratic party nomination in 2008, was a US senator, and is married to a former US president), Mrs Clinton featured on no fewer than four different magazine covers last year. Business as usual, really.

But it was different this time. Wearing her signature pearl-set, Mrs Clinton looked fancy-free and oh-so-presidential in her last cover for New York Magazine before announcing her campaign this week. The breezy, casual laugh is hard to believe. She faces major hurdles to becoming the next president of the United States. Jacqui Lambie sent tongues wagging in her “explosive” interview with The Australian Women’s Weekly just weeks after her resignation from the Palmer United Party last year.

In a glamorous photoshoot, the independent senator told Mr Abbott to “grow a pair”, and cemented her place as one of the more memorable women in Australian politics.

It’s no wonder she was keen to sear herself in the minds of Australian women – the Tasmanian MP established her own political party, the Jacqui Lambie Network, in March.

The magazine covers that made politicians