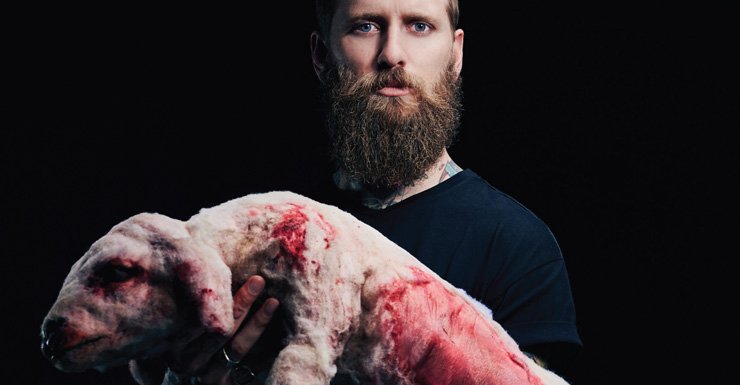 Animal advocates have refused to back away from an ad campaign that used a fake lamb to expose cruelty in the shearing industry.

Local musician Jona Weinhofen headed the PETA campaign, which depicted him cradling a lamb made from foam, bloodied and with missing skin, supposedly wounded by wool clippers.

Agricultural Minister Barnaby Joyce has described it as “a load of rubbish”, saying shearers are “so sick of people lying about their industry”.

The animal was a prop, Mr Weinhofen has admitted, but both he and PETA have pointed to accompanying footage of shearers kneeling on, kicking, stepping on and roughly jostling sheep, and stitching up large wounds inflicted by clippers, as proof cruelty happens.

A fake sheep was used because it would have been “ridiculous” to steal an abused animal from a farmer, PETA Australia campaigns manager Ashley Fruno told The Weekly Times.

“[T]here seems to be more questions about the materials used in the ad than the abuse that happens in shearing sheds,” Mr Fruno said.

‘Ignorant insults’ and ‘misinformed arguments’ have flooded musician Mr Weinhofen, he claimed on his Twitter account, where in recent days he has defended the ad.

Farmers do not want or allow their valuable sheep to be harmed, supporters of the industry have agreed in recently published opinion pieces.

Accidental injury and deliberate mistreatment does, however, occur, evidence has shown.

Shearing is “an acute stressor” for the animals and wounds are possible, the RSPCA told The New Daily in a statement.

“The potential for pain is present where sheep are wounded or injured during shearing.

“Treatment of injuries should be immediate and where shearing wounds are deep and require stitching, the application of a topical pain relief should be considered.”

Frustrated shearers have gouged the eyes and broken the jaws of sheep, a union spokesman told the ABC in 2013.

“A lot of these unfortunate instances could well be stopped very early if farmers and shearing contractors would take action as soon as this sort of behaviour is noticed,” Australian Workers Union’s Sam Beechey said.

“I think it’s a disgrace, it’s an absolute disgrace,”

Farmers do not want their valuable sheep mistreated, but may be disinclined to criticise shearers because of labour shortages, the ABC was told by multiple sources.

“They take no pride in their work. They’re after the numbers, they don’t care about the quality,” an unnamed retired shearer was quoted as saying.

“You sack one here and you just can’t pick them up, so most of the farmers just tolerate it. They can’t do much about it, I actually feel sorry for them,” the shearer said.

Many have also complained that the fake sheep is an inaccurate depiction of result of shearing. So here’s a real one pic.twitter.com/0z6gEYmcsw