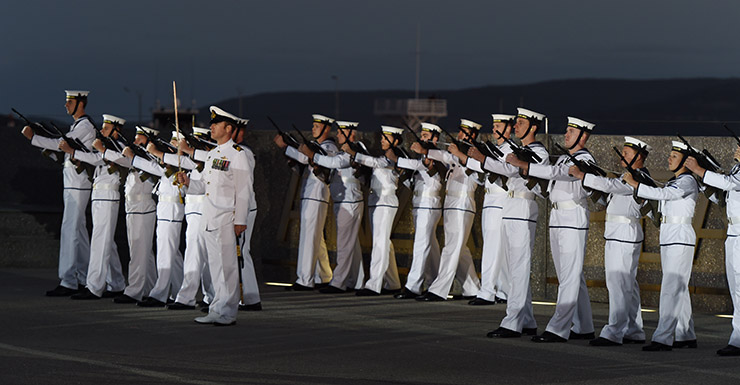 The Royal Australian Navy is being urged to change its policies after an ABC investigation revealed a disturbing spate of suicides involving sailors from the Navy base HMAS Stirling.

At least six current or former serving sailors have died in just two years, five from suicide and one from an apparent drug overdose.

Their deaths have revealed a hidden culture where the drug ice was used on the West Australian base and on Navy ships, and binge-drinking was commonplace.

In one case, a sailor’s wife tried to warn the Navy her husband was an ice addict and yet he was sent to sea regardless, where he died of a drug and alcohol overdose.

• Government ‘tolerated’ abuse of children: letter
• Banks short-change savers
• ‘We didn’t have to warn you of co-pilot’s depression’

Stuart Addison was the first of three close friends based at HMAS Stirling who hanged themselves between February 2012 and May 2013.

After twice attempting to kill himself, once at sea onboard HMAS Perth, Mr Addison hanged himself while on shore leave in Melbourne.

After several days in a coma, his father Mark Addison was asked to withdraw his son’s life support.

“It’s a decision that I don’t think any parent should have to make,” he told the ABC’s 7.30 program.

It was only after Stuart Addison’s death that the family discovered among his Navy documents medical reports showing the young sailor had been on psychiatric medication and had tried to kill himself before.

He told a Navy psychologist it was because of his job.

“Stuart said the main cause of his depression was apparently being in the Navy. He is not happy there and looks forward to his discharge at the end of the year,” a psychiatrist’s report said.

Others sailors were on major psychiatric medication yet their families had no idea of what had happened because of, the Navy says, privacy laws.

RSL advocate Brian O’Neill has been working with two of the sailors’ families.

“The Government should really look at what’s going wrong over there, and not accept what Navy is telling them,” Mr O’Neill said.

“Because as far as I’m concerned — I’ll blatantly say this — they are lying.”

Now Mark Addison has launched a campaign to get the Navy to change its policies so families are informed if young sailors try to kill themselves.

“Somewhere in the system there’s a block,” Mark Addison said.

Matt Henry served at HMAS Stirling and was friends with three of the dead sailors.

He described their friendship circle as being like “brothers” and helped carry the coffin at Stuart Addison’s funeral.

After Mr Addison died, Mr Henry also tried to kill himself “around 10 times” and spent three years in psychiatric care.

Mr Henry, now out of the Navy and recovered through fitness, describes a culture at the HMAS Stirling base of sleeplessness, hard work, hard drinking and drugs, where they would knock off at midday at the behest of their supervisor and go on a “team-building exercise” to the pub.

“Our group would drink all night, it was part of the weekend,” he said.

Ice ‘the drug of choice over in Western Australia’

“It was the drug of choice over in Western Australia, it was very accessible over there,” Mr Henry said.

He said the ice was supplied through “friends” who were sailors at Stirling.

Three months after Stuart Addison, another friend and sailor, Brett Dwyer, also took his own life.

Navy doctors had prescribed psychiatric medication for major depression; he was recovering from a failed operation and had chemical burns to his hands from cleaning a ship’s deck.

Medical documents from 2010 show doctors requesting Brett not be sent to sea, but the Navy sent him the next day anyway.

When he complained he was finding it difficult to work, his shipmates threatened to throw him overboard.

“What they did to him was disgusting,” Brett Dwyer’s RSL advocate, Brian O’Neill, said.

“They actually put him overboard — hanging him up by his feet.”

“You don’t hang people upside down over the back of the ship.

“Especially where the propeller is — if one guy lets go, you’re gone.”

Brett Dwyer was discharged in late 2011 after saying he was taking drugs including ice, although he told Mr O’Neill he had only said that because he was desperate to get out of the Navy.

On the day he died in May 2012, three months after Mr Addison’s death, Mr Dwyer had only just attended his sister’s graduation ceremony.

His family found him dead in their home the next morning.

“I wouldn’t wish that on any family,” Brett’s father Mark said.

“What they did was wrong, they think of him as a number.

As with Mr Addison, Brett Addison’s family only discovered his psychiatric problems after his death.

When his family complained, a letter from the Assistant Minister for Defence admitted he should have been medically discharged, not kicked out.

The final insult for the family was when the Navy made an offer of compensation — $857.49.

Almost a year after Mr Dwyer took his life, the sailors’ other best mate, Jake Casey, hanged himself too.

Mr Casey had been a pallbearer for Mr Dwyer.

Jake’s partner, Christine O’Neill, said he began to hate the Navy culture and started using alcohol and drugs to cope.

“He didn’t understand how officers could pull people out in front of everyone and degrade them the way they did and speak down to people the way they did,” Ms O’Neill said.

“He definitely didn’t want to be on that ship.

In 2011, Jake had a positive drug test after attending a weekend dance party and was hauled off HMAS Perth back to Stirling.

The Navy found 3 milligrams of ice and two pipes in his cabin.

After a motorbike accident at Stirling, Mr Casey was discharged out of the Navy.

“I don’t think there was any duty of care when it came to Jake,” Ms O’Neill said.

“I think he was just treated like a scapegoat.

“They didn’t care about his medical condition, it was just all about getting him out.”

Mr Casey hanged himself three days before the first anniversary of Mr Dwyer’s death. He had ice in his system.

Families wants answers from the Navy

Incredibly, the suicides of these three young men were not the first at HMAS Stirling.

The year before, three other Stirling sailors, also boatswains, died too.

The first was Steven Bebbington, a recovering alcoholic who hanged himself onboard the Stirling ship HMAS Toowoomba after a previous suicide attempt three days before.

Mr McDonald had made three previous suicide attempts and had once locked himself in a gun room — the place where he ultimately took his life.

A Navy Commission of Inquiry found a psychologist and doctor had warned that Mr McDonald was unfit to go to sea or to handle weapons.

But a Navy GP ultimately overruled that advice and he was sent to sea.

Mr McDonald’s mental health record was in Canberra, not on HMAS Toowoomba with his physical health record, when he died, so the ship’s doctor did not know about his previous attempts.

To date, the Navy still has not released the report.

“It makes it hard not to think that there’s something else going on, that they’re trying to sweep this issue under the carpet,” Ms Crichton said.

“Or is this issue too big for them to deal with?”

He was also a boatswain at Stirling and he was an ice addict.

His wife, Karley Livingston, said he was doing ice on the HMAS Stirling base and on ships.

She said she knew of about 30 people on the base who were using ice.

In February 2011, she made a desperate attempt to warn the Navy about her husband’s problem.

She asked to see the Commanding Officer at Stirling but was referred to a Navy chaplain instead.

“I basically told him that he [Doc] needed help and I didn’t want my kids burying their dad,” she said.

“He said that drugs aren’t allowed in the Navy and I said ‘don’t treat me like a stupid Navy wife … I’m not stupid, I know what goes over there’.

“A lot of people are on drugs and stuff on the base — the Navy people run amok.”

After this meeting, Ms Livingston never heard from the chaplain again.

Her husband was given a formal warning about alcohol use, but there was no mention of drugs.

In October 2011, Mr Livingston was onboard HMAS Warramunga when it left Perth for Singapore.

On a Navy stopover in Cambodia, he died in a hotel room.

His system was full of drugs and alcohol.

It is not known whether Mr Livingston intentionally took his life.

But it was abundantly clear he had serious problems and the Navy knew it.

The Navy has told the ABC it will investigate Ms Livingston’s allegations.

Now, the families of these six young sailors want answers from the Navy.

“They just need a bit of compassion. And maybe if they gave that and looked after them, they’d still be here.”

Navy in the spotlight after spate of suicides at base