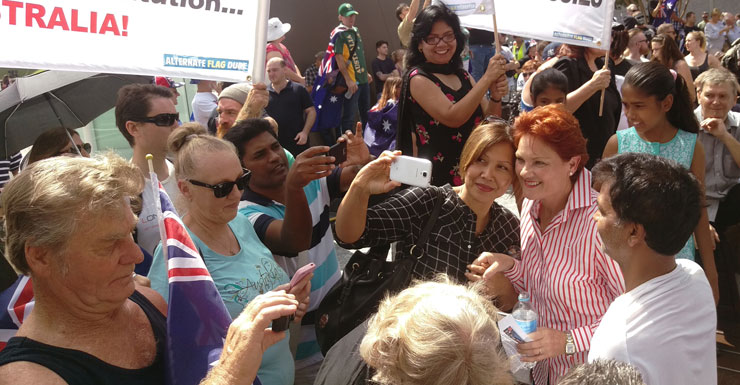 Racism protests have provided a forum for an old face in controversial politics, Pauline Hanson, to weigh in on the halal certification debate.

The former politician and One Nation leader appeared on the Today show on Sunday where she was asked how she can single out one religion for criticism.

She said halal certification, where foods are certified to have been prepared in a way that Muslims can eat, was a form of extortion.

“I’m sorry, prime minister, a lot of Australians have an issue with paying a tax for halal certification when 98 per cent of Australians are not Muslim,” Ms Hanson said.

She said Australians shouldn’t pay extra for the certification.

Ms Hanson appeared on television after nationwide protests in capital cities against Islam in Australia, sharia law and halal.

Protesters were met with a counterprotest in cities including Brisbane, where Ms Hanson said the interactions were lively but free of violence. Police separated the two groups.

But in Melbourne the two groups, Reclaim and No Room for Racism, clashed violently at Federation Square, where Police tried to separate the ideologically opposed cohorts.

Behind police lines, the groups did clash violently, with some punches thrown.

New Limited reported two men and a woman were arrested.

Opposition Leader Bill Shorten said protests against a religion were not new, and the debates were “not true”.

“It was 50-60 years ago people said that the Irish Catholics or the Catholics were trying to take over the joint — and that wasn’t true either,” he said.