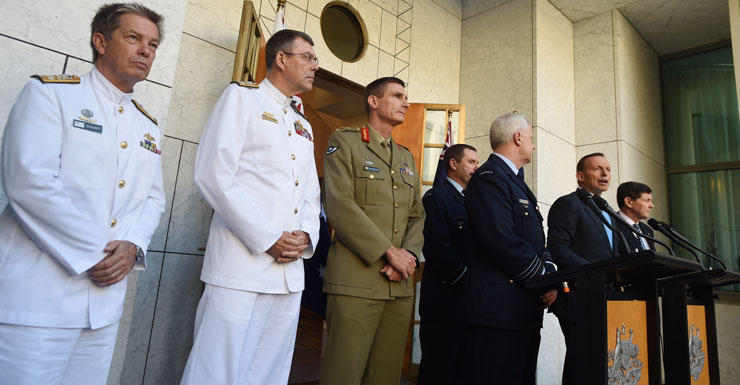 A reshuffle of the defence chiefs will elevate one of the government’s top advisors to a key role in the defence force.

The chiefs of the Army and Air Force are due for reappointments in mid-May and early July.

The new Army chief will be Lieutenant General Angus Campbell on May 16.

Lieutenant-General Campbell was the commander of the politically sensitive joint agency task force on the boat-blocking Operation Sovereign Borders.

Lieutenant General David Morrison assumed the role in 2011 under Labor after a career in the army since 1979. He held a lead role as colonel operations in the Australian led East Timor independence operations.

He announced in February that he would step down in May.

The chief of the Air Force will be Gavin Davies on June 6, who will be promoted to Air Marshal, after the current Air Force Chief, Air Marshal Geoff Brown steps down.

Air Marshal Davies is currently the Deputy Chief of the Air Force and has served in operational roles in command of the strike and reconnaissance 82 Wing.

Air Marshal Brown was appointed under Labor in 2011 and will finish on July 3. He was praised for his “exceptional leadership” while overseeing growth in the Air Force and “heightened operational commitments” fighting Islamic State.

The defence forces are to be reviewed in a first-in-over-forty-years overhaul after a report leaked on Wednesday found the organisations were wasteful and “top-heavy”.

The Defence Materiel Organisation came under fire for its drawn out procurement process and weighty 12,500 pages of procedures.