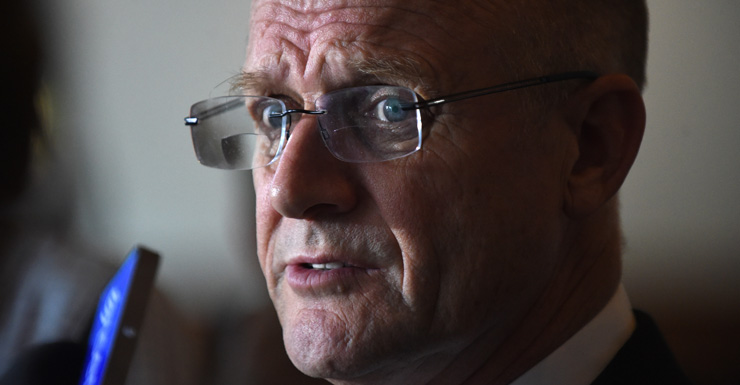 “Someone should give you a blast of shotgun. Preferably in the stomach.”

The hand is large, each letter capitalised.

The recipient is Senator David Leyonhjelm, a federal politician trying to change the legal definition of marriage.

“You are up to your dirty filthy tricks again,” it says.

This is the second time the micro party politician has tried to allow men to marry men, and women to marry women. “Go back to the filthy place you came from,” says the anonymous writer, presumably referring to the tiny farming town of Heywood, in Victoria’s South West.

Hate mail like this, sent to his office on Wednesday, is common, says the Senator, and will not deter him.

But he is concerned that his staff must deal with “this kind of correspondence”.

“We actively support freedom of speech, but this does not reflect well on the company people who oppose our Freedom to Marry Bill are keeping,” Senator Leyonhjelm tells The New Daily.

This letter threatens the politician’s life, and predicts “a curse” will be placed upon his family if he proceeds with his private member’s bill in the upper house.

“The moment you legalize [sic] your filthy practice I would advise you to leave Australia in a hurry.

The Senator himself is not gay, but is adamant the government should not intrude in the bedroom.

As of 2013, more than two-thirds (65 per cent) of Australians support same-sex marriage, and 79 per cent want their parliamentarians to vote freely on the issue without being constrained by their party’s official stance.

This is Senator Leyonhjelm’s hope.

Until then, his office will endure these threats of violence.

‘Sunlight is the best disinfectant’ is a favourite saying amongst the staff.