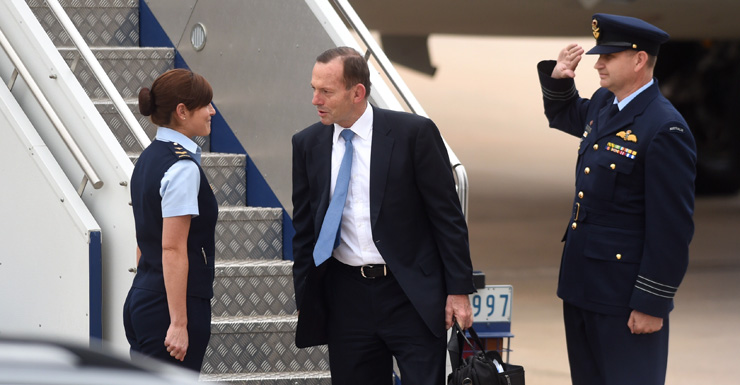 Prime Minister Tony Abbott is under fire for taking a VIP military jet to the birthday party of a millionaire Liberal Party donor on the weekend.

Mr Abbott chartered the flight to Melbourne on Sunday afternoon to attend the celebration for mining magnate Paul Marks.

The Prime Minister’s office justified the use of the plane to News Corp journalists by saying he had “other work related engagements” in Victoria’s capital, but provided no further details.

Waste Watch committee chair Pat Conroy, a Labor MP, told The New Daily he had requested proof the flight — which may have cost the public “well north of $10,000” — was warranted and was yet to given such proof.

“He should go public with the government engagement that justified this,” said Mr Conroy, who described the delay as “an appalling look”.

“The public have a right to know how our politicians are spending their money.”

Four thousand dollars per hour is the cost of operating the jet, said Mr Conroy, which includes wait time on the tarmac, potentially pushing the total cost closer to $20,000.

The committee chairman intends to use a freedom of information request to obtain the PM’s itinerary for Sunday.

“Let’s not get stuck into the guy for having a moment with some acquaintances,” Mr Billson told Sky News.

Independent Senator Nick Xenophon said the Prime Minister must explain why he did not use a cheaper commercial flight.

“These are legitimate questions for taxpayers,” the Senator told reporters in Canberra.

The Australian air force operates VIP aircraft for government officials and dignitaries, and it is common practice for Mr Abbott to charter these aeroplanes.

Last year, Mr Abbott admitted to a backbencher that he used a last-minute visit to a cancer facility to justify the use of the same or a similar VIP jet.

The New Daily has approached the Prime Minister’s office for comment.