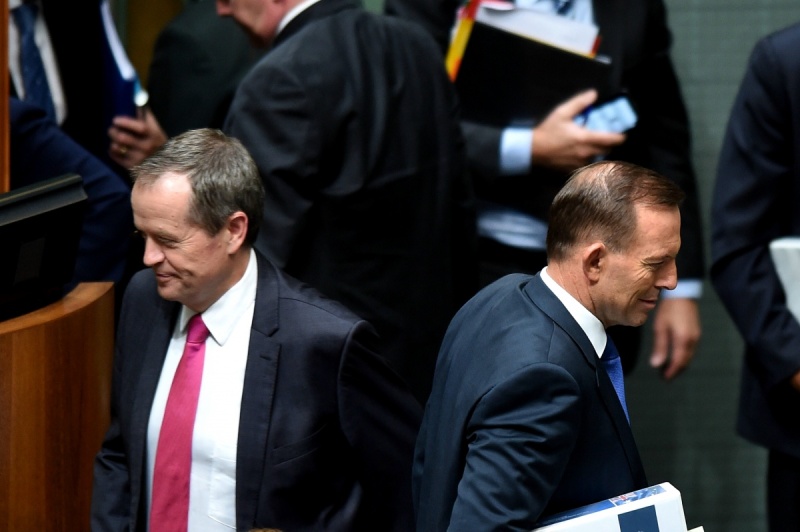 The only acceptable reason for entering politics is to stand for something and to argue for what you believe in.

This doesn’t mean looking after Number One – maximising the taxpayer-funded perks and parliamentary superannuation, while looking for cushy jobs after finishing up as an MP.

It is about believing in things, advocating policies and translating them into action. And that doesn’t mean steamrolling people who disagree with you. Democracy means majority rule – with minority rights and respecting the rule of law.

• Two for one: ‘if Baird goes, so will Abbott’
• Howard: Tony Abbott has what it takes to win
• Government unveils plan to save reef
• Malcolm Fraser – our last great moderate

Hence, I don’t believe being in Opposition means that you have to accept the government of the day has a “mandate” to do whatever policies they took into the last election.

For starters, politicians often break their own promises on what they will do if they win an election.

If a government doesn’t always do things that it promised to do, why should the Opposition simply go along for the ride?

The “mandate” given by voters is more about being chosen by voters because they trust that party to govern, or at least trust it more than the alternative. An election is not a referendum on a set of policies.

Take the Abbott government. On one hand, they claim a mandate to do certain things that they promised, like abolish the carbon tax. On the other, they want to do other things they sprang on voters after the election, like the GP co-payment.

While in Opposition, the Coalition attacked Labor, particularly Julia Gillard, for running a dysfunctional government. But Labor and Gillard were able to negotiate plenty of legislation through the parliament despite having a minority in both houses.

For whatever reason, Tony Abbott and the Coalition are unwilling or unable to take voters and the crossbench senators with them. They’re still trying to pass the 2014 Budget measures, while working on this year’s model, which is due in May.

In Opposition, Labor leader Bill Shorten has cautiously sniffed around and started to mark out his territory. This started in his reply to the 2014 Budget – like opposing the GP co-payment and university fee deregulation.

Mr Shorten has started to articulate some discrete policy differences, like a modestly harder line on corporate tax avoidance and support for an Australian republic.

However, Mr Shorten has insisted that there is absolutely no space between the Coalition and Labor on important issues like national security and defence. So what is this – an all-party War Cabinet like World War II?

Many voters are looking for genuine debate on national security and the majority opinion is somewhere between pure pacificism and belligerence. If the British House of Commons can have a debate before deciding to commit troops overseas, why can’t Australia do the same in our national parliament?

In practice, bipartisanship can lead to a kind of cartel conduct between the major parties. They go easy on each other on selected issues, and pick the subjects they will publically fight over.

Take the attempts to ‘Close the Gap’ on indigenous disadvantage. When Mr Shorten mentioned some problems, of which there are still many, some Coalition MPs walked out of parliament.

Is that what bipartisanship means to the Coalition – that you can’t criticise at all? It’s a big price to pay.

Former NSW Premier Kristina Keneally recently wrote a powerful piece for the Guardian Australia in which she argued that Labor party needs to “own up and muscle up” in response to the Australian Human Rights Commission’s Forgotten Children report.

If Labor wants to regain any moral authority on the issue of children in detention specifically, and asylum seekers generally, it should stop sidestepping its own past policy decisions. The Labor opposition can and should face up to the disastrous consequences to children of its immigration and detention decisions in government.

Ms Keneally added that Labor should also acknowledge the Abbott government has made improvements, such as releasing some children into the community.

Don’t get me wrong. The best moments in Australian politics often come when we agree – like the 1967 referendum to recognise Aborigines as full citizens. More recently, there has been the bipartisan opposition to the death penalty imposed in Indonesia on the reformed drug smugglers, Andrew Chan and Myuran Sukumaran.

But both these examples involve fundamental human rights. There’s plenty of room for disagreement and debate.