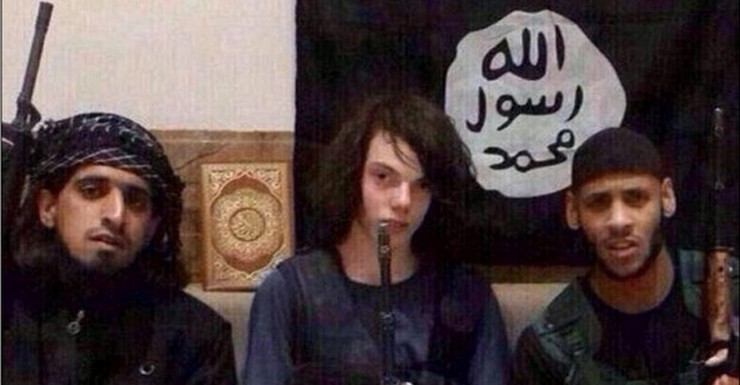 John Bilardi is shocked, confused and drenched in guilt.

He can’t explain how his “quiet, intelligent” teenage son, Jake, had plans to stage a string of bombings across Melbourne.

John can’t even begin to comprehend why his son blew himself up in an attack on Iraqi forces more than a week ago.

At least 17 people were killed, and dozens injured in the attack.

“I’m sorry, I wish I could have stopped this,” John said in a heart-wrenching interview on the Nine Network’s 60 Minutes program on Sunday night.

“One of the main reasons why I’m doing this is I would like everyone to know, the buck stops here with me.

“He was my son, I knew there was something not right with his behaviour, he had psychological or mental issues that should have been addressed and I feel totally responsible for that.”

John said he and his five other children have no idea why an 18-year-old suburban boy from Craigieburn wanted to sacrifice himself in the name of Islamic State (ISIL).

“He was a prize, a trophy – they used him for their own cause,” he said.

A young man who resembled Jake was pictured on social media sitting in the driver’s seat of a white car, just as reports of the suicide bombing in Iraq began surfacing on March 12.

The picture was posted online accompanied by messages saying the youth had carried out a “martyrdom”, similar to previous ISIL propaganda associated with suicide attacks.

It features a young, long-haired white man dressed in green fatigues and identified by ISIL as Abu Abdullah al-Ustrali – Jake’s name in the terror organisation.

“They put him in a car loaded with explosives, and they probably all just shouted ‘praise Allah’ or whatever they chose to say and set him off – I can’t imagine how he was feeling,” John says.

“Just to see him sitting there with that gun is just unbelievable – I just couldn’t believe that was my son.”

John said that at the age of 15, Jake decided to become a Muslim, and began going to a local mosque and attending an Islamic youth group. They were an atheist family and were surprised, but accepted his decision.

“He said he would sacrifice his life for Islam.” Jake Bilardi’s school friends open up to @michaelusher. #60Mins pic.twitter.com/aSSUIIHIas

But what they didn’t know was that Jake was being groomed by violent extremists online and brainwashed over the internet.

They also spoke about his growing obsession with the Middle East and that he spoke of ‘sacrificing himself for Islam’. They say they weren’t surprised that he was brainwashed via the internet.

“There is a lot of stuff online, but I believe Jake, for him, he found the right thing, and that’s the scariest part,” one friend told 60 Minutes.

According to Jake’s blog, he wrote: “I want to tell you my story, how I came from being an atheist school student in affluent Melbourne to a soldier of the Khilafah preparing to sacrifice my life for Islam in Ramadi, Iraq.”

He had wanted to stage a “string of bombings across Melbourne”.

He notes he was “waiting for my turn to stand before Allah” and there was a “current waiting list of 12 martyrdom bombers, of which I am one”.

Jake’s family in Melbourne located explosive device materials at the family home that Jake writes in his blog would be used as a ‘plan b’ to blow up parts of Melbourne.

They alerted authorities who began attempting to track Jake’s movements in the Middle East, with Foreign Affairs Minister Julie Bishop confirming his passport was cancelled in October.

Then on March 12, reports were surfacing that Jake was linked to a suicide attack in the southern Iraqi city of Ramadi.

“There’s a very big warning, big warning, to everybody out there. It’s going on, it’s happening, it’s real, it’s not just people from a Muslim background – it’s anybody they can find, any soft target.” John said.

“They see this Utopia… where they would fit right in.” Counter-terrorism expert Dr Aly on ISIS propaganda. #60Mins pic.twitter.com/cCpp4BAOXW

‘I’m sorry. I wish I could have stopped this’