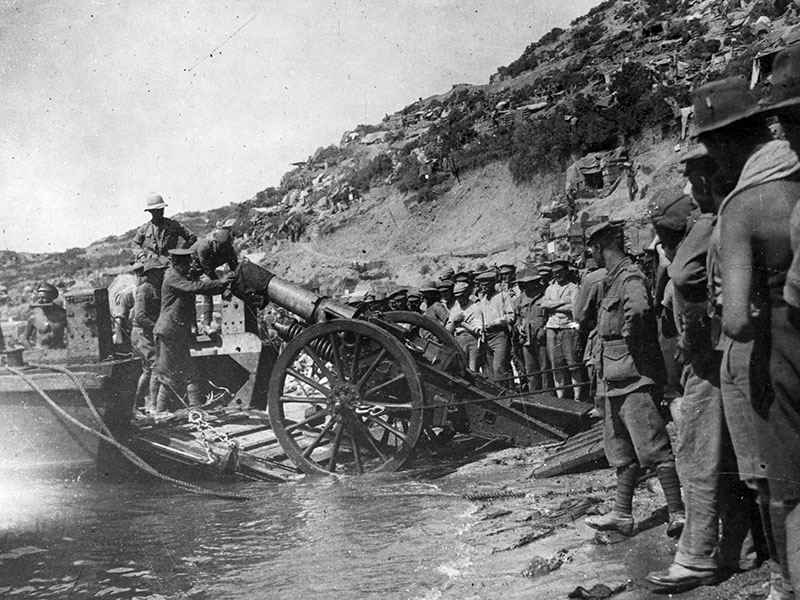 Beneath the busy waters of the Dardanelles lies the French battleship Bouvet, its upturned hulk the ghostly resting place for more than 600 French sailors.

Their demise on March 18, 1915 – a century ago this week – along with two British battleships led to a momentous decision four days later – to land troops, including Australians and New Zealanders, on Gallipoli.

• Polish prize for an original Rat of Tobruk
• Charles, Harry to attend Anzac Day in Gallipoli

Previously Britain thought it could win this campaign with naval power alone.

But loss of more than a third of the force on March 18, 1915 prompted a rethink.

Bouvet’s destruction was sudden – cruising at speed, the 12,000-tonne vessel struck a Turkish mine and was also hit by a large shell.

Within two minutes – some say under a minute – she capsized and sank with just 50 survivors of her crew of 710.

An hour later HMS Irresistible struck a mine and sank with loss of 150 crewmen. Three hours later HMS Ocean hit yet another mine and sank, fortunately with little loss of life.

Compounding this disaster, three other battleships were damaged by Turkish shells and mines.

Historian Peter Stanley said the decision to proceed with an amphibious landing came about because this naval attack had gone so wrong.

“The final decision was made on the 22nd but the planning began in February when (British commander General Ian) Hamilton was appointed and when the Mediterranean Expeditionary Force started assembling on Lemnos. The first Australians arrived on Lemnos in the first week of March,” he said.

“It wasn’t an impulsive decision. It was the next best option.”

This entire campaign had its genesis in a plea for help from Russia, hard-pressed by Turkish forces in the Caucasus. On January 2 it asked Britain for some assistance.

With some reluctance, Turkey had announced allegiance to Germany on October 31, then invading the Russian Caucasus to recover lost territory.

With ever growing enthusiasm, First Lord of the Admiralty Winston Churchill seized on the proposal for forcing the Dardanelles using the might of the Royal Navy.

Once known as the Hellespont, this 61-kilometre strait links the Aegean to the Sea of Marmara.

Churchill believed the under-used navy could battle past Turkish guns and minefields and arrive off the Turkish capital Constantinople. With some judicious shelling of the Sultan’s palace, there would be a revolution and installation of a more amenable government which would withdraw Turkey from the war.

Knowing what we know now, this seems fanciful.

But as the western front turned into stalemate, both sides perceived opportunities of unparalleled allure. Should the allies succeed, the ring of steel around Germany would be tightened and supply lines to Russia secured.

For most of a page of the official history, Charles Bean waxes lyrical about the potential benefits of success, which he concluded could have shortened the war by a year if not two.

“A hundred years ago, many saw the Dardanelles as the sector where the war would be decided,” Oxford Professor Hew Strachan told the Gallipoli conference in Canberra .

This was deceptively successful but difficulties mounted. For the fleet to proceed, minefields needed to be cleared but slow vulnerable minesweepers couldn’t operate until Turkish guns were silenced.

Britain’s naval commander realised the only way to silence Turkish guns was through landing demolition parties of Royal Marines – effective until Turkey increased infantry defences. There lay a dawning of realisation that only through a ground force could this ever succeed.

But there was to be one final shot at success by naval means alone on March 18.

This turned into a catastrophe, thanks to Turkish minelayer Nusret which secretly laid a line of some two dozen mines in a previously unmined bay – Turks had noticed attacking warships turned through this area when withdrawing. Bouvet was the first to die and others followed.

Turkey justly recognises March 18 as a major victory, to which this plucky little vessel made a stunning contribution. Nusret remains in the Turkish navy as a museum ship.

Canadian historian Professor Christopher Bell said at this stage, it should have been called off.

“But by middle March there was consensus among politicians back in London that it was now too late to stop,” he told the Gallipoli conference.

“There were fears that abandonment would be interpreted everywhere as a major and humiliating defeat.”

So the formal go-ahead for landing on Gallipoli came on March 22.

This plan was proposed by Hamilton and naval commander Admiral John de Robeck and ticked by the British war council. With no part in British strategic planning, the Australian government wasn’t consulted.

This operation was to be undertaken by the 70,000-strong MEF, with the French landing at Kum Kale on the Asian shore of the Dardanelles and Britain landing at Cape Helles at the end of the Gallipoli Peninsula.

Untried Australians and New Zealanders were to land near Gaba Tepe on the Aegean side of the Peninsula.

It was to advance across the peninsula and seize the Kilid Bahr plateau overlooking the narrowest part of the Dardanelles.

This it was hoped would neutralise Turkish shore defences, thus making safe passage for the warships which started it all.