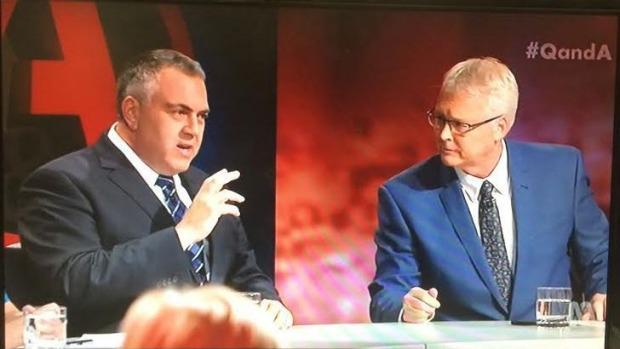 Q&A audience members have been left scratching their heads after Treasurer Joe Hockey said Australian laws were failing to meet a world he described as “disintermediating”.

“You sounded like Kevin Rudd,” Jones said on Monday night.

Viewers of the program took to Twitter to ask Mr Hockey what disintermediating meant and if it was even a real word.

The treasurer used the word to describe modern day financial technologies and said Australian laws were out of touch.

“We have laws designed for yesterday that are failing to meet the challenge of a new world that is disintermediating and bringing in the consumer at a complete interface with other consumers,” Mr Hockey said.

“A new world that is disintermediating”: @JoeHockey on @QandA | https://t.co/tYbqLxcAtg

According to the Collins English Dictionary, the financial term refers to the elimination of financial intermediaries such as banks and brokers in transactions between buyers and sellers, often as a result of deregulation or computer use.

Social media users picked up on the similarity between Mr Hockey and Mr Rudd’s superfluous language, with one man tweeting: “It’s time we started disintermediating the nation’s programmatic specificity around infrastructure.”

The term “Rudd speak” was coined after Mr Rudd – during a press conference in Europe with German leader Angela Merkel – said it was unlikely any progress would come out of an economic forum “by way of detailed programmatic specificity”.

Communications Minister Malcolm Turnbull said he had no idea what the term meant and accused Mr Rudd of having “linguistic problems”.

“As I understand it, I heard part of his speech was not only incomprehensible in English, but so incomprehensible the German translators were unable to translate,” Mr Turnbull said at the time.

Hockey is disintermediating himself from this question. #QandA — Pat Loria (@pat_loria) March 16, 2015

Disintermediating = it’s all too hard. That was a looooong answer with no substance. Joe is better with words than numbers. #QandA — Emperor God Goughlam (@leftocentre) March 16, 2015