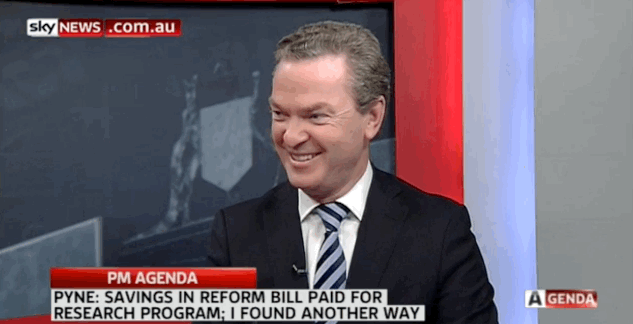 He made the declaration during a Sky News interview on Monday, during which he announced that 1700 research jobs he had threatened the day before were no longer under threat.

But how exactly he ‘fixed’ the problem remains a mystery.

Mr Pyne’s teasing media appearance followed a day of negotiations in the Senate with independents who refuse to back the government’s higher education reforms, which include university fee deregulation and a $20 million cut to funding.

Speaking on ABC program Insiders on Sunday morning, Mr Pyne said the research jobs were “inextricably linked” to the government’s deregulation measures, indicating the jobs would go unless the Senate passed the bill.

But on Monday, Mr Pyne said he had “cleared away” the problem by finding $150 million in extra funding.

Sky News presenter David Speers pressed the Liberal frontbencher on the source of the money.

“You made it very clear yesterday that you had to get the reform bill through, otherwise 1700 positions would go,” Mr Speers said.

“I fixed it by funding it another way, which you will find out in the budget.”

When asked by the interviewer if he could clarify the source of the funding, the Education Minister laughed and said: “I want it to be a surprise for you”.

The government backflip has already sparked memes on social media, including fictional movie posters with Mr Pyne as “The Fixer”.

Business Insider Australia described the interview as “really awkward”, but acknowledged it had been a “bad day of backdowns” for Mr Pyne.

@murpharoo The Fixer – just when you thought the Higher Education Bill was dead and buried pic.twitter.com/tVWS3igifh