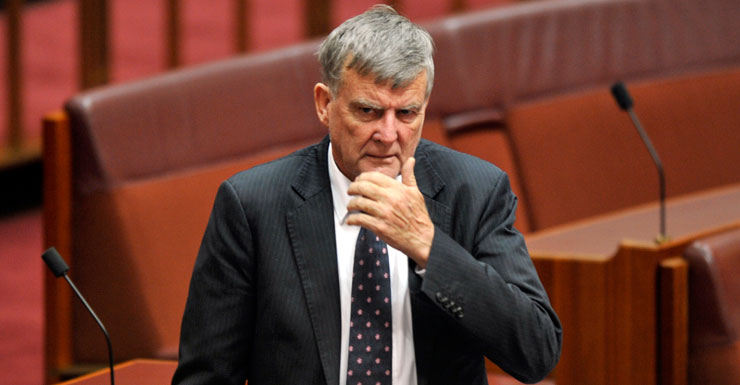 Senate President Stephen Parry is making “no comment” on allegations the official record of parliament is being manipulated by the paragraph.

Senator Bill Heffernan told the ABC he had investigated claims of political changes to the Hansard transcript of parliamentary sittings.

He said a three-week investigation of Hansard, where he compared the recorded words to those heard in the House and Senate turned up examples of whole paragraphs being changed.

The parliament allows changes to the record under certain circumstances, as long as it does not change the meaning.

The investigation comes after Nationals Deputy Leader Barnaby Joyce made incorrect statements in the House of Representatives, but Hansard showed a corrected record, the ABC reports.

“I have reams of examples in the last three weeks, which – and this may be a wake up call to everyone – includes whole paragraphs of Hansard being changed,” Mr Heffernan said.

The Opposition’s Joel Fitzgibbon joined the Senator in calling for attention to the issue of Hansard changes.

“If the system is breaking down to the extent that it’s allowing people to make substantial changes to their Hansard after the event then that needs to be addressed and I’ll be raising those issues with the Speaker this week,” he said.

The New Daily asked for comment from the Speaker Bronwyn Bishop but has not yet had a response.

The House of Representatives Practice regards Hansard as “a verbatim report of the debates of the House”.

The parliamentary rulebook continues: “Although Members have this right to make corrections to their remarks, emendations which alter the sense of words used in debate or introduce new matter are not admissible”.