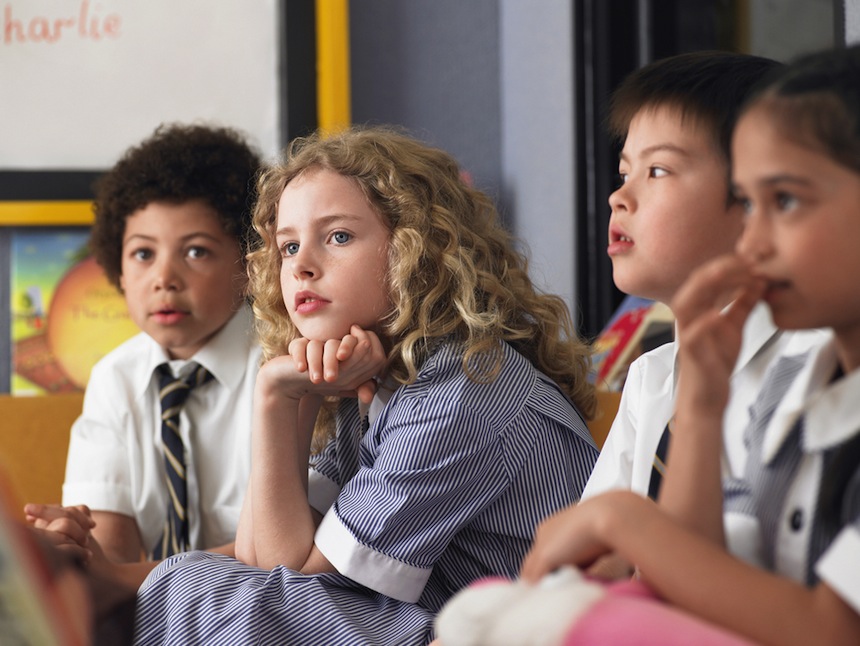 Amid debates about budget cuts and the rising costs of schools and degrees, there is one debate receiving alarmingly little attention in Australia. We’re facing a slow decline in most educational standards, and few are aware just how bad the situation is getting.

• Pyne: 1700 could lose their jobs
• A world without tech: frightening or free?

These are just six of the ways that Australia’s education system is seriously failing our kids.

1. Australian teens are falling behind, as others race ahead

The Programme for International Student Assessment (PISA) survey tests the skills and knowledge of 15-year-old students in more than 70 economies worldwide. And it shows that Australian 15-year-olds’ scores on reading, maths and scientific literacy have recorded statistically significant declines since 2000, while other countries have shown improvement.

Although there has been much media attention on falling international ranks, it is actually this decline in real scores that should hit the headlines. That’s because it means that students in 2000 answered substantially more questions correctly than students in 2012. The decline is equivalent to more than half a year of schooling.

In maths and science, an average Australian 15-year-old student has the problem-solving abilities equivalent to an average 12-year-old Korean pupil.

An international assessment of school years 4 and 8 shows that Australian students’ average performance is now below that of England and the USA: countries that we used to classify as educationally inferior.

The declining education standards are across all ability levels. Analysis of PISA and NAPLAN suggests that stagnation and decline are occurring among high performing students as well as low performers.

2. Declining participation in science and maths

It has been estimated that 75 per cent of the fastest growing occupations require science, technology, engineering and mathematics (STEM) skills and knowledge.

The importance of STEM is acknowledged by industry and business. Yet there are national declines in Australian participation and attainment in these subjects. We are also among the bottom of the Organisation for Economic Co-operation and Development’s (OECD) 34 nations on translation of education investment to innovation, which is highly dependent upon STEM.

Fewer than one in ten Australian students studied advanced maths in year 12 in 2013. In particular, there has been a collapse in girls studying maths and science.

Australia is just about the only developed nation that does not make it compulsory to study maths in order to graduate from high school.

A recent report by the Productivity Commission found almost one-quarter of Australians are capable of only basic mathematics, such as counting. Many universities now have to offer basic (school level) maths and literacy development courses to support students in their study. These outcomes look extremely concerning when we review participation and achievement in maths and science internationally.

In NSW, the number of HSC students studying Chinese in 2014 was just 798 (635 of which were students with a Chinese background), whereas a decade ago it was almost double that number, with 1,591.

The most popular beginner language in NSW was French, with 663 HSC students taking French as a beginner in 2013. These numbers are extremely small when you consider that the total number of HSC students in NSW: more than 75,000.

These declines, which are typical of what has happened around the country, have occurred at a time when most other industrialised countries have been strengthening their students’ knowledge of other cultures and languages, in particular learning English.

English language skills are becoming a basic skill around the world. Monolingual Australians are increasingly competing for jobs with people who are just as competent in English as they are in their own native language – and possibly one or two more.

4. International and migrant students are actually raising standards, not lowering them

There are many who believe that Australian education is being held back by our multicultural composition and high proportion of migrant students. This could not be further from the truth. In the most recent PISA assessment of 15 year olds, Australian-born students’ average English literacy score was significantly lower than the average first-generation migrant students’ score, and not significantly different from foreign-born students.

The proportion of top performers was higher for foreign-born (14 per cent) and first-generation students (15 per cent) than for Australian-born students (10 per cent).

Students from Chinese, Korean and Sri Lankan backgrounds are the highest performers in the NSW HSC. The top performing selective secondary schools in NSW now have more than 80 per cent of students coming from non-English speaking backgrounds.

5. You can’t have quality education without quality teachers

While there are many factors that may contribute to teacher quality, the overall academic attainment of those entering teaching degrees is an obvious and measurable component, which has been the focus of rigorous standards in many countries.

An international benchmarking study indicates that Australia’s teacher education policies are currently falling well short of high-achieving countries where future teachers are recruited from the top 30 per cent of the age cohort.

In Australia between 1983 and 2003, the standard intake was from the top 26 per cent to 39 per cent. By 2012/2013, less than half of Year 12 students receiving offers for places in undergraduate teacher education courses had ATAR scores in the top 50 per cent of their age cohort.

Teacher education degrees also had the highest percentage of students entering with
low ATAR scores, and the proportion of teacher education entrants with an ATAR of less than 50 nearly doubled over the past three years. We cannot expect above-average education with below-average teachers.

6. Early learning participation is amongst the lowest in the developed world

Australia also ranks at 22 out of 37 on the OECD league table that measures the total investment across education as a percentage of Gross Domestic Product.

Funding is a critical issue, and not just in terms of what you spend, but also how you spend it. Research suggests spending on early childhood, quality teaching and core curriculum have the greatest returns on investment.

There is also growing evidence to suggest that a segregated schooling system – for example, socio-economically or academically selective) schools – is counterproductive and restricts social mobility. High-performing countries have school systems on a far more level playing field than Australia.

We need a long-term plan across education sectors: from early childhood, to schools, universities and TAFE, which includes plans for supporting and strengthening teacher education in all those sectors.

We also need a louder public conversation about Australian education, and lobbying to shift how we value and invest in education.

When Germany was shocked by its first performance on the 2000 PISA assessment, it started a national conversation that saw education on the front page of newspapers for the next two years. Germany’s education has been improving ever since.

If Australia wants to build a strong and competitive economy, we need fewer front page articles about budget cuts, and more on reform and investment in education.