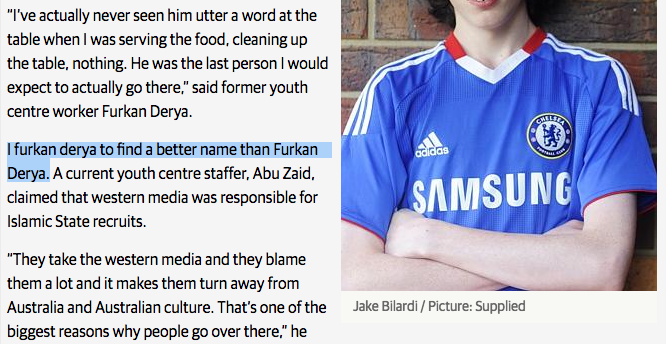 A Sydney tabloid has been widely criticised for poking fun at a source’s name, which some have interpreted as an error.

After quoting Mr Derya on the serious issue of young recruits to terrorism, the author writes: “I furkan derya to find a better name than Furkan Derya”.

The comment was printed in The Daily Telegraph‘s Monday edition and, as of 11am, remained on the newspaper’s website.

Social media users were quick to spot the derisory remark, with some speculating it was accidentally — or deliberately — left in the story by editors.

“When sub editors aren’t paying attention, or perhaps they were?” BBC reporter Phil Mackie tweeted, along with a photo of the mistake.

Elle Hardy, a writer for The Monthly, tweeted: “Given the online text hasn’t been altered, I furkan derya to say it wasn’t deliberate”.

Pulse Radio CEO Wade Cawood said someone at The Daily Telegraph was “about to have a really bad day”.

This gets better. Apparently the Furkan Derya reference was deliberate. It was always part of the column. — Miguel D’Souza (@MiguelDSouza) March 15, 2015

You’re all saying “Furkan Derya” in an Australian accent now, aren’t you?

It’s not a publishing error RT @workmanalice “I furkan derya”? Compliment or insult by @dailytelegraph. pic.twitter.com/RDvNAnNdtK