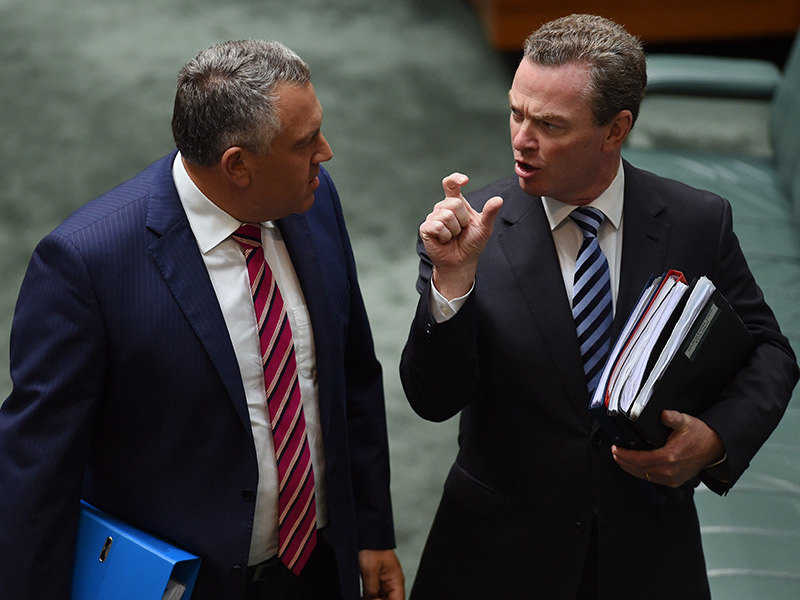 The whole saga from the moment he shocked the nation with a massive broken promise in last year’s budget has been marked by bluster and bravado.

His last throw of the dice was linking funding for an important scientific program, the National Collaborative and Research Infrastructure scheme, to the passage of his highly-controversial legislation, which put the work of 1700 researchers at risk.

Though the link was not in his reform bills, he brazenly claimed on Sunday that the $150 million allocated to the scheme would not go ahead without them. Scientists would have to be sacked and the Senate would wear the blame.

This was too politically tin-eared, even for the prime minister. The dogged Mr Pyne was counselled to change tack. Less than 24 hours later he fronted a news conference to announce the threat no longer applied. The $150 million now was small beer in the scheme of things. He did not want it to be a distraction for the eight crossbench senators.

They are no longer distracted but most are still unconvinced. The bills will be split. Deregulation of the sector allowing universities to charge whatever fees they like has been separated from the 20 per cent cut in their government funding. That will be held off until the budget.

Belinda Robinson from Universities Australia, who stood beside Mr Pyne during the Monday press conference, startled the minister by asserting the cut is now dead.

Her organisation virtually tailored the original package. It cunningly appealed to the government’s privatisation agenda and seemed to help in its search for savings.

But in its quest to be freed from the vagaries of politicians changing funding arrangements, even when Mr Abbott promised they wouldn’t, they misread the public mood and overestimated the government’s ability to sell anything, especially an idea as unpalatable as making it more expensive for kids from less well-off families to get university qualifications.

Only one of the eight crossbench senators is likely to support the latest version. South Australian independent Bob Day has been deserted by his usual accomplice David Leyonhjelm. He says the reforms won’t save taxpayers’ money but will cost more because of the overly-generous student loans and the increased likelihood of bad debts.

The wiliest on the crossbench, Nick Xenophon, has a compromise. He wants to limit the fees universities could charge while there is an inquiry into the impact of such far-reaching deregulation. That is unlikely to fly.

The National Tertiary Education Union points to the costly mess the Abbott government has made by encouraging private providers in the Vocational Education and Training sector. Changes there have cost almost $2 billion and have been open to blatant profiteering. The union’s Jeannie Rea says it shows how an open market gets out of control.

Tony Abbott says these reforms are too important to walk away from. Looks like he’ll have to send his education minister back to the blackboard.