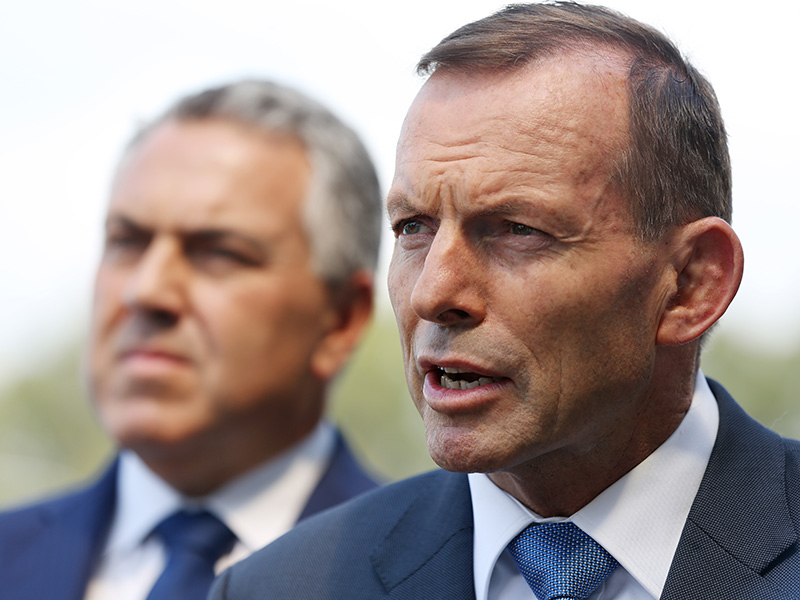 Tony Abbott’s leadership was saved in part by a last-minute email campaign by a conservative group which denigrated Malcolm Turnbull and Julie Bishop.

A key conservative group, the National Civic Council, was so worried for the Prime Minister that it launched an email campaign, according to a report on ABC’s Four Corners program.

The campaign, which emailed thousands of the NCC’s members and associates, asked people to email their federal Liberal MPs to ask them to support Mr Abbott in the spill.

• Click here for all of today’s top stories
• Paul Bongiorno: Pyne uni reforms slammed by senate
• Where in the world is Vladimir Putin?

The email said Mr Abbott had “held the line” on marriage and repealed the carbon tax.

“Whatever his failings, the alternatives are Malcolm Turnbull, who failed as leader, and Julie Bishop, who was forced to resign as shadow treasurer,” the email issued by NCC vice-president Pat Byrne said.

The emails linked to a live webpage hosted by sister organisation, The Australian Family Association, where almost 100 Liberal MPs could be contacted with a single click.

NCC vice-president Patrick Byrne, who organised the email campaign, said it was effective.

“Our email campaign would’ve gone out to maybe 10,000 people; I’m not exactly sure and I don’t have direct feedback, but I think it’s had some influence,” he told Four Corners.

MPs described being deluged with emails leading up to the leadership spill.

“In the last few days the emails have been overwhelmingly flooding the office saying all this nonsense about leadership has gone far too far, and the emails are now overwhelmingly saying ‘stick to the team you’ve got’,” Senator Eric Abetz told ABC Hobart at the time.

Credlin in the spotlight again

Fresh criticism of the PM’s chief of staff Peta Credlin and the conflict of interest of having her husband Brian Loughnane as the Liberal Party’s federal director.

A leaked text message from party treasurer Philip Higginson to a senior Liberal member described Ms Credlin as “the Horsewoman of the Apocalypse”.

Liberal senator Ian Macdonald told Four Corners that having a husband and wife as the principal advisers for the party and government “doesn’t make for a good interaction between the parliamentary wing and the organisational wing”.

“I’ve always thought that was unfortunate and I would hope that something might be done about that,” he said.

Julie Bishop told the program she had full confidence in Mr Abbott.

The deputy Liberal leader told reporters the latest internal party leaks are damaging and should stop.

“It’s always unfortunate if there are leaks to the media that are damaging in any political party,” she said. “Anything of that nature is obviously most unfortunate and shouldn’t be said.”