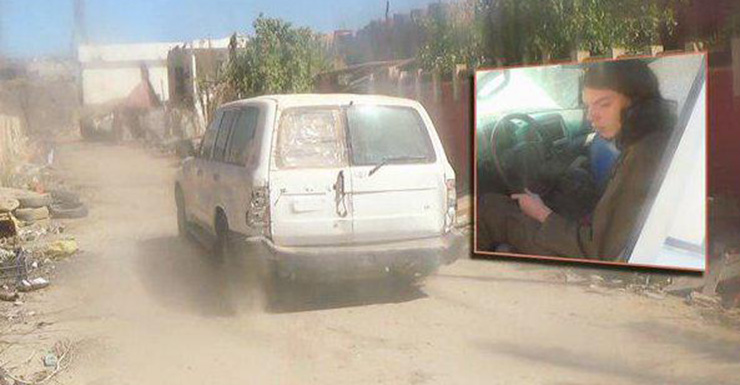 A Melbourne youth suspected of completing a suicide attack in the southern Iraqi city of Ramadi was planning an attack in his home town as a “plan B”, according to a post on the teenager’s blog.

Police on Thursday confirmed that Craigieburn youth Jake Bilardi left explosive devices at his home before leaving for Turkey to join Islamic State in Syria.

A young man who resembles Bilardi was pictured on social media overnight in the driver’s seat of a white car; the picture was inset into another photo of the white four-wheel drive.

The picture was posted online accompanied by messages saying the youth had carried out a “martyrdom”, similar to previous Islamic State propaganda associated with suicide attacks.

It features a young, long-haired white man dressed in green fatigues and identified by the Islamic State as Abu Abdullah al-Ustrali – Bilardi’s name in the terror organisation

Foreign Affairs Minister Julie Bishop said the government was working to confirm the reports, but information was difficult to obtain.

She said the flight of Australians into warzones like Iraq and Syria was now the nation’s top security priority.

The ABC reported that a number of suicide bombings occurred yesterday in Iraq’s Anbar Province, where the attack is said to have taken place.

“The Australian authorities have had reason to have Bilardi under surveillance for quite some time,” Ms Bishop said.

“The terrorist organisation preys on vulnerable people, it preys on young people in particular.”

His blog, From Melbourne to Ramadi: My Journey, shows Bilardi knew he was under surveillance and created a plan B: to detonate bombs in public places around Melbourne.

“Fearing possible attempts by the increasingly-intrusive authorities in Australia to prevent my departure I began drawing up a Plan B. This plan involved launching a string of bombings across Melbourne, targeting foreign consulates and political/military targets as well as grenade and knife attacks on shopping centres and cafes and culminating with myself detonating a belt of explosives amongst the kuffar (infidels),” Bilardi wrote.

He further wrote that he feared attracting attention by buying bomb-making materials, “ceased planning plan B and sat waiting until everything was prepared and I could exit the country undetected.”

Bilardi also wrote that he was preparing for a suicide attack in Ramadi.

He escaped Australia after his passport was cancelled in October, as revealed by Foreign Minister Julie Bishop on Thursday, who said 100 passports had been cancelled under the Foreign Fighters laws.

The Department of Foreign Affairs and Trade said it could not yet confirm reports of the teen’s death “due to the extremely dangerous security situation” in the area.

“Australians who become involved in overseas conflicts are putting their own lives in mortal danger,” a DFAT spokesperson said.

“Any Australians fighting with non-state militia in Syria or Iraq should end their involvement in the conflict now and leave the conflict zone.”

No free speech for ISIL

A former UN negotiator, Andrew MacLeod, said the social media strategy used by Islamic State had to be blocked.

Mr Macleod, who was a chief of operations at the emergency relief centre in Pakistan and negotiated directly with Taliban leaders, highlighted the situated where free speech on pedophilia is blocked but on terrorism it is allowed.

“What we’ve actually got to do is crack down on free speech by organisations like ISIL,” he said.

“The power of communications, the power to reach from the deserts of Iraq and Syria to the outer suburbs of Melbourne like Craigiebourne is the power we must start blocking.”

Islamic State is “under pressure” in the Anbar region, especially around Tikrit and Ramadi where the Iraqi government forces are attempting to rout Islamic State, says Professor Greg Barton, Monash University’s  director of the Centre for Islam and the Modern World.

He said young fighters like Bilardi who have no fighting experience and do not speak Arabic would be used as suicide bombers by the group.

“You’re a patsy,” he said. “They’ll use young recruits as suicide bombers even more.

“It’s a cynical move by a very cynical organisation.”