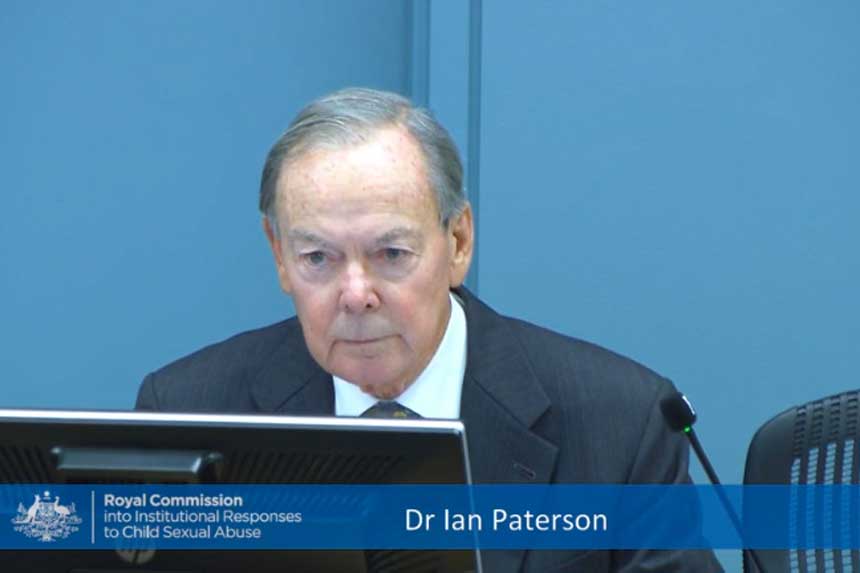 After an abject apology to Knox Grammar sexual abuse victims, the former headmaster of the elite Sydney boys school has defended his decision not to report the assaults to authorities.

Ian Paterson, head of the Wahroonga based school from 1969 to 1998 faced intense questioning on Tuesday at a royal commission hearing into the school, where five former teachers have been convicted of indecent assault on boys and three others stand accused.

The crimes all happened during Dr Paterson’s tenure and they were never reported to police.

“I am deeply and profoundly sorry,” Dr Paterson told the child abuse inquiry in Sydney.

“I should have known and I should have stopped the events that led to the abuse and its tragic consequences for these boys in my care and their families.”

But the former headmaster, who is a member of the Order of Australia, said it did not cross his mind to report teachers to police or to the Department of Family and Community Services (DOCS).

He said he now realises he should have done so. He denied his main concern at the time was the school’s reputation.

When a boy complained in 1989 that teacher Damien Vance had groped and propositioned him Dr Paterson told the 15-year-old to go to the library and think about what he was saying.

When pressed by counsel assisting the royal commission David Lloyd as to why he did not tell police Dr Paterson said: “Because the boy was a drama boy … who could build up situations”.

Dr Paterson also said he was “not aware that it was a crime”.

In 1991 Vance was given a “strong” reference by Dr Paterson. The reference allowed Vance to register with the Victorian Department of Education as a permanent teacher.

Dr Paterson said he didn’t think of the effect on other schools when he wrote letters of recommendation for Vance or other offenders like Adrian Nisbett, Craig Treolar or Chris Fotis.

Fotis, a Knox old boy, was hired without any reference check. It later emerged he had two sex assault convictions.

“The times were very much different then. We judged people ourselves. I would not consider that a failure at all,” Dr Paterson said.

Fotis a teacher of religion, was asked to resign because the school suspected he had donned a balaclava, hid under a dormitory bed and groped a 14-year-old boy, the royal commission heard.

Dr Paterson’s reference described him as “enthusiastic for his job” and “meticulous in the standards he requires from students”.

Police have issued a warrant for Fotis’ arrest after he failed to appear after being called to give evidence last week.

Dr Paterson said student or teachers files did not contain allegations of abuse.

He accepted this was his failure.

The commission has been asking why there were no records of allegations or the school’s response.