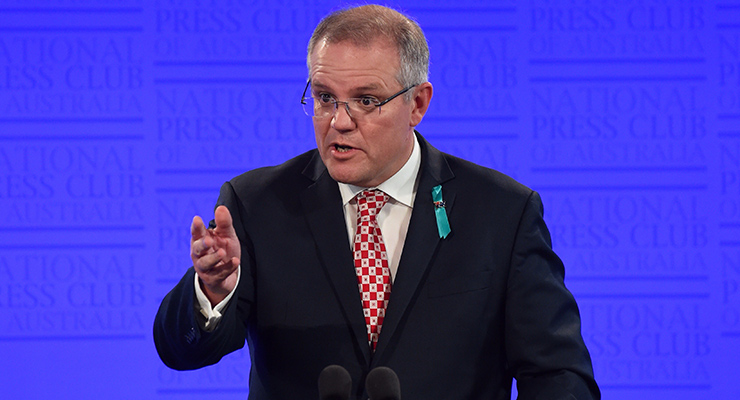 When former Immigration and Border Protection Minister Scott Morrison was moved to the social services portfolio by Prime Minister Tony Abbott late last year, it was tempting to see the appointment as little more than a hospital pass.

But after Mr Morrison’s appearance at the National Press Club on Wednesday, the move may end up being one of the smartest things Mr Abbott has ever done.

Australia’s $150 billion welfare system is the hole in the budgetary bucket that defies repair. As Mr Morrison explained:

Unless there is major structural change that is made to our welfare system over the next decade and beyond, over a generation, our social services expenditure will swallow the budget. Instead of increasing taxes to meet these booming costs – which would run counter to Liberal philosophy, not to mention the PM’s election commitments – the Government is forced to cut welfare spending.

Regrettably for the Abbott government, plans to implement these cuts haven’t gone as expected. All of the big welfare saving items announced in last year’s budget were universally vilified by the public and consequently blocked by Labor, the Greens and the crossbench in the Senate.

Scott Morrison wasn’t the obvious man for the job. Having essentially “stopped” the boats, the ambitious Minister had been angling for expanded responsibilities in an anticipated reshuffle of the ministry, and had unofficially put up his hand for a wide-reaching homeland security portfolio or a move to defence.

But he was given the vexed social services portfolio instead. The man who’d become the public face of Australia’s controversially tough asylum seeker system, who’d perfected the art of stonewalling in press conferences and appeared to have undergone an empathy bypass, seemed hardly the candidate to recast the Government’s welfare approach as compassionate, considerate and economically responsible.

Yet that is what Mr Morrison appears to be attempting to do, and Wednesday’s appearance at the NPC suggests he’s made a good start.

A new ministry, a new man

In fact Mr Morrison himself has undergone a similar makeover in recent months. The man who shunned media appearances and dourly refused to discuss on-water matters has been replaced by an affable chatterbox who’s been popping up all over the news media, posting photos of himself on Facebook and cheery videos on YouTube. He’s even decided to revive his languishing Twitter account.

And so even though Mr Morrison’s NPC address was to acknowledge the McClure Report, his real purpose was to reposition the Government’s welfare reform agenda.

Wearing not a blue tie but one with jaunty red-and-white checks, Mr Morrison gave us the first extended look at his new welfare reform pitch.

Instead of appealing to voters’ inner economists by banging on about debt and deficit, the Minister appealed to their sense of equity and personal wealth, noting: “Our welfare system must respect those who need our help and depend on that help but it must … respect those who pay for it and that is the taxpayer.”

Listing his priorities as the young unemployed, families (that is, mothers) and the aged, Mr Morrison stressed the best way to reduce welfare spending is to increase jobs. The Minister nevertheless conceded a carrot and stick approach might be necessary to get people to take up those employment opportunities.

For his part, the Minister said he’d used his address to identify the path to welfare reform, rather than specific actions, because governments are criticised for rushing too quickly to the solution without actually engaging in a broader conversation with voters about what it is they’re trying to fix “and that’s what I’ve endeavoured to do today”.

Mr Morrison challenged the opposition parties and crossbenchers to also take a fresh approach, noting they were clearly free to continue with their populist “unfunded empathy” but would need to bring funding options to the negotiating table if they wanted any of the disputed budget measures dropped.

‘We need your help’

Finally, Minister Morrison called on voters to do their bit to improve the political debate in Australia, by eschewing the “are you better off or worse off in the next five minutes” approach to every policy announcement, and instead focusing on the benefits of policy reforms that are important over a generation. These may sound like the words of an idealist, but they were uttered by an ultimate pragmatist.

If anyone can bring these ideals to reality, the odds are firming that that person is Scott Morrison.

It’s no secret that Mr Morrison would benefit if a leadership change were to occur in the federal Liberal Party this year. He could emerge as the new treasurer alongside the Turnbull/Bishop duumvirate, or perhaps even slip to the lead as the ultimate dark horse.

Whatever the end-game may be, the social services portfolio is strengthening Mr Morrison’s hand. If the Minister can transform the public’s vitriolic opposition to the welfare reform agenda to acceptance, even if it is begrudging, and change the tenor of the reform debate, he will become 10 times the Liberal hero he was after “stopping” the boats.

After that, it may well only be a matter of time before the Minister becomes the Prime Minister.

And by then it will be irrelevant whether he was set up to fail or succeed when given the social services portfolio. Scott Morrison a beacon of hope and danger for PM