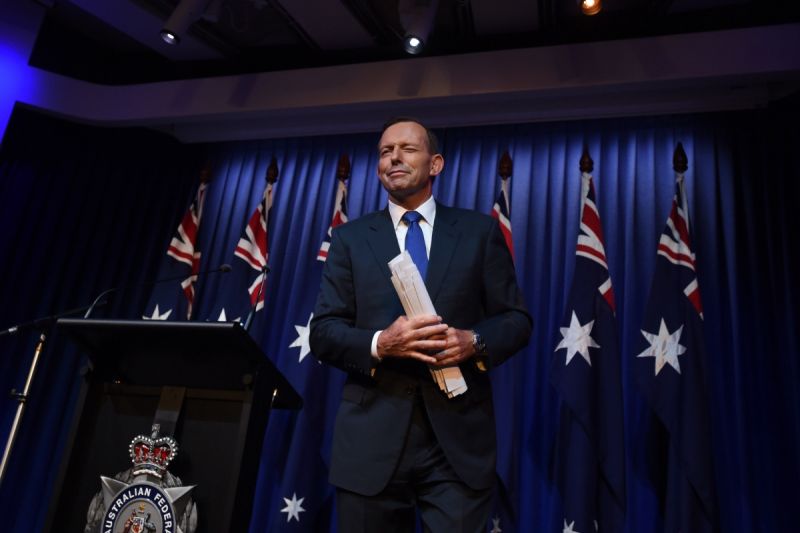 Even before Prime Minister Tony Abbott uttered a word of his much-vaunted national security statement this week, much was made of the podium from which he would speak.

Not one, two or even four Australian flags festooned the stage, but six proud banners bristled on the platform, ready to lend their gravitas to the man and his message.

No job on the day was more important than theirs, which was to ensure the viewers at home were left in no doubt that Mr Abbott was talking about a matter of National Importance.

It clearly wasn’t enough that the PM had been telling any journalist within earshot for days that he had Very Important Things to say in the address.

Not even the audience assembled on the day, including members of the Cabinet’s national security committee and assorted soldiers and spooks, were considered adequate to convey the statement’s gravitas and import.

Nothing less than a half-dozen Aussie flags would do – their Union Jacks nestling alongside our beloved Southern Cross.

Only they could impress on the Australian people that our Prime Minister alone, almost like a modern-day John McClane (aka Bruce Willis), stood between us and the bad people who had taken us for mugs and were threatening our unique Australian way of life.

Nothing quite says “I will do anything for my country” than a national flag, whether it’s positioned carefully behind a podium, standing to attention on a desk, or perched in miniature on a jacket lapel. Oh, the reassurance.

And so evocative has the Australian flag been for political purposes that both of Australia’s two major parties featured it in their logos until the ALP rebranded itself as Australian Labor and ditched the Union Jack a few decades ago.

Former PM John Howard rarely spoke to the media without a flag just within camera shot to reinforce his nationalistic devotion, while Bob Hawke took his patriotism even further, wearing a jacket emblazoned with Aussie flags the day we won the America’s Cup.

This political legacy must have played on the minds of the PM’s advisers as they contemplated the right number of flags and the perfect shade of blue tie to stop voters wondering “is he gone yet?” and instead convey the importance of stopping the dole for jihadists.

Looking abroad for guidance, they may have naturally referred in the first instance to the British Prime Minister, David Cameron, only to find him a conservatively modest two-flag man.

Putin was last seen topping the nationalist scale with a flag-count of seven, shirtfronting Mr Abbott’s count by one.

No one would envy the poor soul who was faced with having to make the flag decision that day.

While doing a Hawkie by donning a jacket emblazoned with Aussie flags would have been out of the question – for Aussie flag speedos wouldn’t have set the right tone – the question would have remained whether to go flag-lite in the subtle Howard style, or outflank the audacious Putin with a bakers’ dozen.

In the end, there really was only one option.

While Putin outflagged Mr Abbott in a one-on-one contest, perhaps the biggest Australian flag-fest witnessed before Monday was when US President Barack Obama shared a stage in parliament house with then-PM Julia Gillard.

Six Australian flags, interspersed with the same number of Stars and Stripes, flanked the leaders’ platform in what can only be described as an awesome display of nationalism.

In years to come, no one will remember that PM Abbott gave a speech long on national security rhetoric, and short on detail, in a last-ditch attempt to shore up his crumbling leadership.

What they will remember is the flags.

For this was not an everyday two-flag press conference, or even a four-flag ceremonial occasion like that afforded to rockstar Indian Prime Minister Narendra Modi, but a fully-fledged six-flag spectacular, and with not an American flag in sight.

Even so, to misquote Hamlet, the PM and his dutiful flags doth protest too much, methinks.