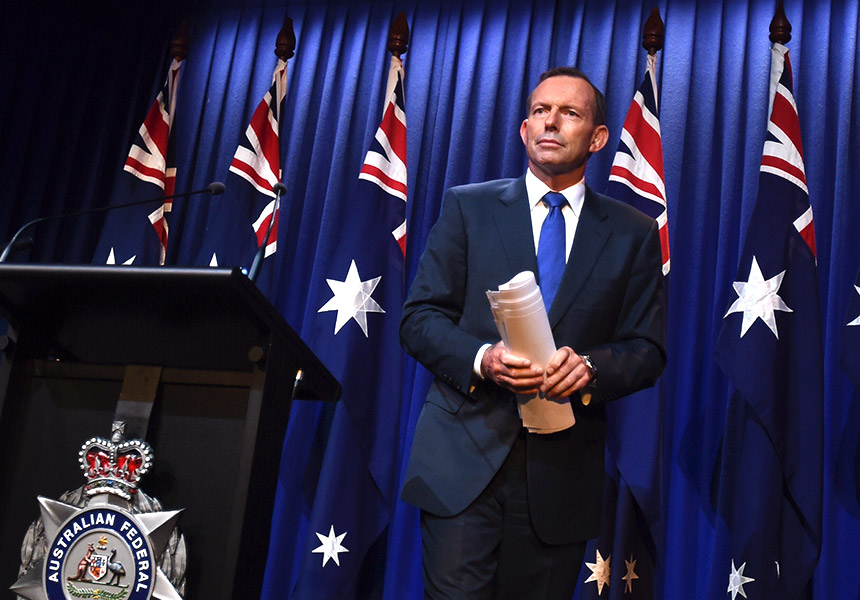 Tony Abbott chose the sanctuary of the Australian Federal Police headquarters to announce that the terror threat has never been greater and is worsening.

Six Australian flags festooned the podium, a metaphorical security blanket for a Prime Minister also under threat from his own party room not sure if he is up to the job of saving them or the nation.

There were disturbing new facts in the presentation. The domestic intelligence agency ASIO has doubled the number of Australians it considers worthy of high-priority counter-terrorism investigations. More young Muslim Australians are being seduced by the barbaric “death cult” he now calls Daesh.

The language is disturbingly xenophobic: an imported ideology, attractive to new citizens or their children determined to destroy our way of life.

On the one hand the Prime Minister acknowledged the role played by the Muslim community in countering this insidious development.

“Intelligence agencies have engaged with individuals at all levels within communities to diminish support for violent extremist ideology,” he said.

But later there was a gratuitous swipe at those very communities.

“I’ve often heard Western leaders describe Islam as a religion of peace. I wish more Muslim leaders would say that more often, and mean it.”

Seriously, mainstream Muslim leaders would not pay lip service to such a core belief.

The carefully scripted insult in fact is contrary to a prescription in the Counter Terrorism Review also released by the Prime Minister. It warns against “inadvertent affront”.

It says: “Messages need to be carefully developed in consultation with members of Australia’s Islamic communities to avoid generating anti-government sentiment within the communities we are seeking to influence.”

As Labor’s Bill Shorten noted in his reply, hastily relocated to the caucus room when the parliament was abandoned, social cohesion is the most fundamental weapon against homegrown terrorism. But the Opposition is refusing to be wedged on the issue, promising measured and careful co-operation.

The Abbott pitch is playing to our fears and prejudices. Perhaps that’s where he judges his base vote resides, although according to The Australian, the Prime Minister’s chief of staff Peta Credlin believes the base vote is holding. What appears not to be holding is the base vote in the party room and the cabinet.

The statement would not have impressed many there for its political deftness. By contrast, Foreign Minister Julie Bishop is winning kudos for mopping up after the PM.

She did it after Mr Abbott’s “shirtfront Putin” outburst, and again last week after he appeared to be threatening Indonesia, linking the fate of the two Australians on death row to our aid generosity.

Ms Bishop’s work for the release of journalist Peter Greste from an Egyptian jail was praised in parliament by the Liberals’ Teresa Gambaro.

“At a time when it appears that nuanced subtlety, respect and courtesy is disappearing from our world, minister Bishop has shown diplomacy to be an art that transcends the blunt instrument of sabre rattling.”

Clearly the Liberals have other attractive flag carriers if Tony Abbott can’t get his to fly.