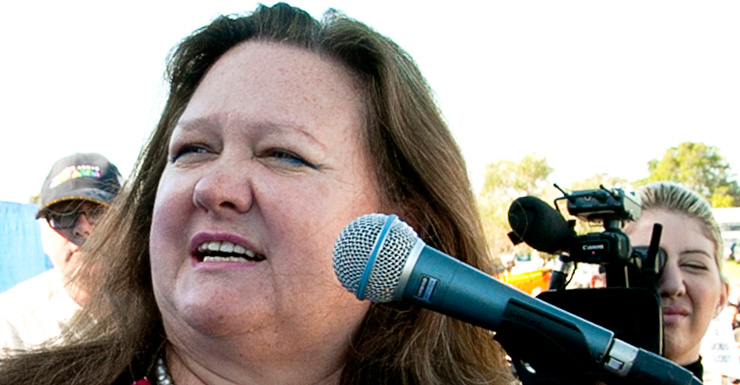 Mining magnate Gina Rinehart should be able to watch the second episode of Nine Network’s show House of Hancock before it airs, a judge says.

Justice Peter Garling said that based on promotional material and interviews about the second episode there was a real prospect the show would air statements that are not entirely accurate and perhaps even made up.

He pointed to remarks made by entertainment reporter Peter Ford that the second episode was 20 times worse and made Ms Rinehart look like an “obsessed, vindictive shrew”.

“I am satisfied the plaintiff is entitled to see it,” he said.

He ordered that Nine Network hand over a DVD of the episode due to be broadcast on Sunday.

It can only be viewed by Ms Rinehart, her senior and junior counsel and a number of solicitors.

He said Ms Rinehart’s lawyers must now let the Nine Network know if they are going to make an application to stop the broadcast of the show by 9.15pm.

If such an application is made the hearing will happen at midday on Saturday, he said.

It comes after barrister Tom Blackburn SC made the urgent application for discovery in the Supreme Court on Friday, saying Ms Rinehart held concerns the episode contained injurious falsehoods, was defamatory and breached consumer law.

He cited “inaccuracies” in the first instalment of the two-part drama that aired last week, with more than 1.38 million tuning in.

This included a dramatised conversation between Ms Rinehart and her late father Lang Hancock.

Ms Rinehart’s concerns were increased, he said, when A Current Affair story on House of Hancock aired this week.

“(It) gave my client cause for enormous concern about the likely … honesty of that program” and the “severity of falsehood about to be broadcast”, he said.

The court heard House of Hancock producer Michael Cordell had said “This is a big explosive Dallas-type drama and a lot of it we didn’t have to make up”.

“Channel Nine knows that some of it is made up,” Mr Blackburn told the court.

He said Ms Rinehart wanted access to the show in order to determine what grounds an urgent injunction preventing it from going to air could be made.

If falsehoods and defamatory material were aired, Mr Blackburn said it could do great damage to the businesswoman’s reputation and would likely have financial repercussions.

But barrister for Nine Network, Peter Gray SC, said material in the episode was already in the public domain and had been “exhaustively traversed”.

He said the granting of such orders would impinge on freedom of speech.