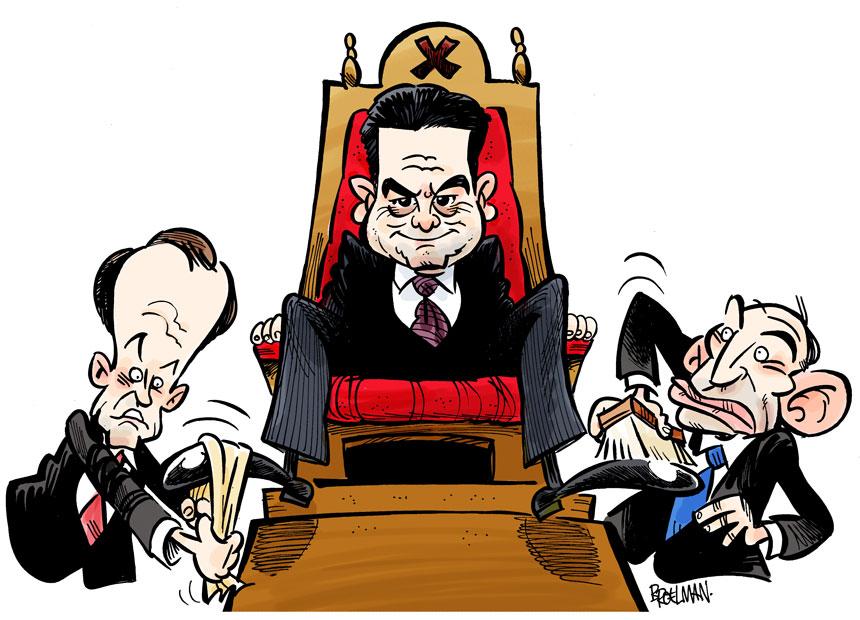 Unlike most other anti-politicians and MPs famous for corny stunts, independent senator Nick Xenophon is suddenly being taken seriously.

The man who was once a parliamentary jester, at different times employing a (live) giraffe, goat and mule to get media attention, is now considered King of the Senate crossbench.

These are heady times for the former Adelaide lawyer, who specialised in workers compensation and personal injury cases before taking an interest in poker machines and gambling addiction.

• What is Joe Hockey softening us up for?
• Xenophon calls for uni inquiry
• Will Joe and Tony slash tax breaks for the rich?

He ran for the South Australian parliament’s upper house in 1997 on a ‘No Pokies’ ticket and, despite just scraping in on preferences, increased his vote from 2.9 per cent in that year to 20.5 per cent in 2006.

Since then, Mr Xenophon’s star has waxed and waned. He’s taken on other popular causes, at times controversially used parliamentary privilege to fight what he has seen as injustice, and, after joining the Senate with a healthy vote from the South Australian people in 2007, shared the balance of power from 2008 to July 2011 with the Greens and Family First.

Even after losing this influence when the Greens gained the sole balance of power in 2011, Mr Xenophon warned that he planned to remain a “pesky, persistent bastard in and out of the Senate”.

And so he has.

Due to a mixture of good luck and canny manoeuvring, Mr Xenophon not only regained his balance of power position after the 2013 election but the wily and experienced politician is now the one to which most of the other independent, micro and minor party senators look for guidance.

Even the major parties are increasingly going to him for support. This was first evident in November, when Jacqui Lambie’s departure from the Palmer United Party plucked the balance of power from Clive Palmer’s hands by reducing his voting bloc to two.

Prior to that, Mr Palmer had the ability to direct the three Senate votes needed by Labor combined with the Greens to block any government legislation in the Senate.

Mr Dastyari also helped senators Lambie and Muir to better understand the impact the weaker rules had on ‘mum and dad’ investors, including those impacted by the Timbercorp scandal who had given evidence to a Senate inquiry at the time.

Mr Xenophon agreed to be the ‘symbolic’ figurehead of the coalition of Labor, Green and four crossbench senators formed by Mr Dastyari to bring down the financial advice changes in the Senate.

The resulting media coverage of the Coalition of Common Sense was classic Xenophon, thanks to their arrival at the press conference striding like gunfighters at the OK Corral.

Importantly, Ms Lambie’s defection has also made it possible for the government to pass legislation in the Senate without having to make a deal with Mr Palmer. Yet it needs support from all six non-PUP crossbenchers to do so.

Not surprisingly, Mr Xenophon has also emerged here as the go-to man for striking a deal with the crossbench.

He is clearly revelling in his ascendancy to powerbroker status, but is wielding this influence with more intelligence and pragmatism than Mr Palmer ever did.

Prime Minister Tony Abbott said earlier this week the Coalition’s higher education changes were at the centre of his legislative agenda for 2015.

Education Minister Christopher Pyne, with an eye to the need to give Mr Xenophon something to negotiate with, flagged a willingness to consider scrapping the proposed 20 per cent cut to tertiary course funding in return for crossbench agreement for universities to be able to set their own fees.

Mr Xenophon has in turn asked for a comprehensive review of higher education, with the suggestion that university fee increases be allowed but capped until the review is concluded. At this point Ms Lambie opposes deregulation and Mr Muir is ‘leaning’ against it, but, interestingly, PUP senator Dio Wang supports university fee deregulation despite his party leader saying PUP senators will vote against it.

If Mr Xenophon is able to deliver the government at least a partial victory from this mess, it will confirm his superior status on the crossbench.

His view will accordingly have an influence on most of the key political debates that take place this year, with both the government and the opposition vying for him to influence the crossbench in their favour.

These views are nothing less than eclectic: Mr Xenophon is opposed to the PM’s proposed parental leave scheme, changes to the Medicare rebate, increasing the eligibility age for the pension, and cutting Newstart for people under 30. However he supported the reintroduction of temporary protection visas (reluctantly), helped to scrap the carbon price and is opposed to wind farms.

So it’s bound to be high stakes for all this year in the Senate Court of Xenophon.

And a royally interesting time for political observers.

Why Nick Xenophon is the most powerful man in Australia