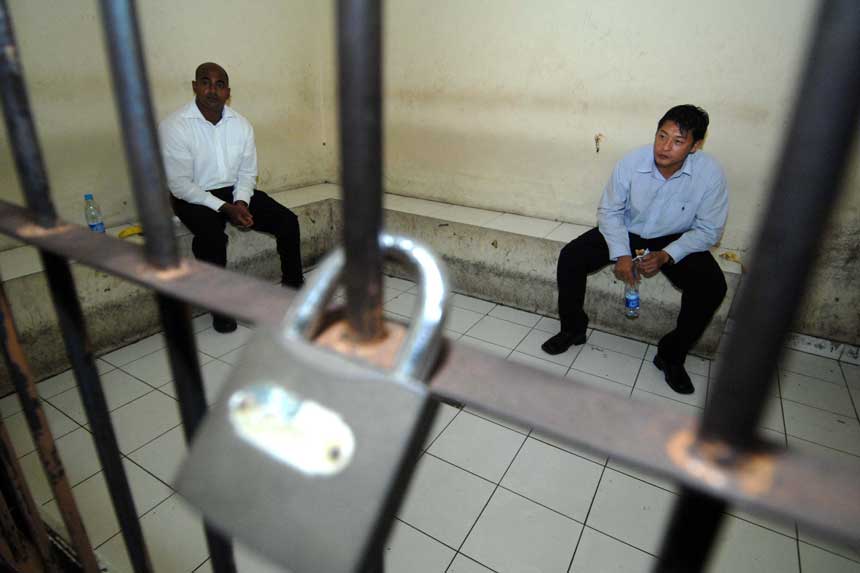 A group campaigning to save two jailed Australians from the death penalty in Indonesia says the federal government must try harder to stop their looming executions.

Bali Nine death row inmates Myuran Sukumaran and Andrew Chan are on a list of 26 prisoners Indonesia says will be executed this year, including six who will be killed this Sunday.

News of the looming executions has galvanised Australians seeking clemency for Chan and Sukumaran.

A petition asking Indonesian president Joko Widodo for mercy on the pair has gained 2500 signatures since it was set up by the organisation Mercy Campaign on Friday morning and was continuing to attract another signature every five seconds, a spokesman said.

A previous Mercy Campaign petition to the Australian government has attracted more than 20,000 signatures.

Mercy Campaign co-founder Brigid Delaney called on Prime Minister Tony Abbott to increase his efforts to save the men’s lives.

Indonesia has replied to a written appeal from Foreign Minister Julie Bishop by explaining its strong stance on drug offences.

Chan, 31, and Sukumaran, 33, were sentenced to death for their part in a 2005 scheme to import more than 8kg of heroin from Indonesia into Australia.

Ms Delaney said the Australian government could do more.

When Australian Van Tuong Nguyen was executed for drug offences in Singapore in 2005, Ms Delaney said, there was “absolute outrage” in Australia.

“If this does go ahead I think there will be such visceral outrage and questions will be asked of Tony Abbott – why didn’t you do more?,” she said.

Mr Abbott said earlier this month that his government would make “the strongest possible representations” to Indonesia seeking mercy but said it would be foolish to risk jeopardising diplomatic relations.

A spokesperson for Mr Abbott on Friday said the Australian government will continue to make representations to seek to avoid the execution of Chan and Sukumaran.

However, the execution is on hold pending the final decision on Chan’s clemency bid.

Indonesian Attorney-General HM Prasetyo said if a crime is committed by more than one person, the executions must be conducted at the same time.

“It’s not over until there is an announcement made. While that process is continuing, there is hope,” she said.

NSW Council for Civil Liberties president Stephen Blanks said the Australian government should be making it clear to Indonesia that the Australian public “regards these executions as unacceptable and unjustifiable”.

Mr Blanks said it was “reprehensible” that Indonesia was resuming executions.

“The death penalty is wrong in all countries and in all circumstances,” Mr Blanks said.