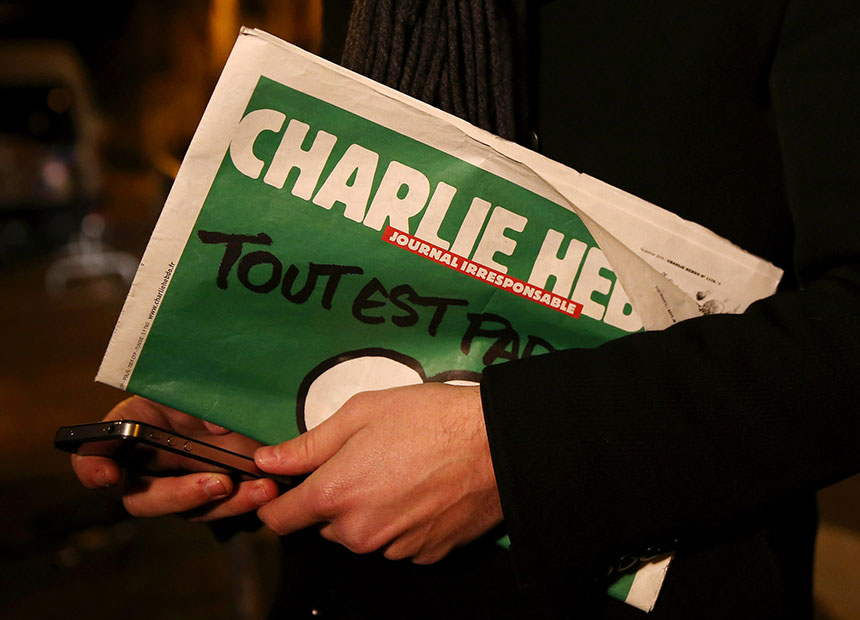 Prime Minister Tony Abbott has come out in support of the cover of the latest edition of satirical French magazine Charlie Hebdo, which shows an image of the Prophet Mohammed and is considered offensive by many Muslims.

Mr Abbott has also rejected fresh calls for a repeal of race-hate laws, amid a debate over free speech prompted by the deadly attack last week on the magazine.

The cover of the latest edition of magazine Charlie Hebdo, published on Wednesday, shows the Prophet Mohammed weeping under the words, “All is forgiven”, and holding a placard carrying the words now synonymous with the free-speech movement, “Je Suis Charlie”, or “I’m with Charlie”.

While it has been praised in some quarters for its defiance, the cover has also been criticised by others as being unnecessarily provocative when tensions between the secular West and Islam are already high.

But Mr Abbott says he will not revisit last year’s controversial attempt to overhaul Section 18C of the Racial Discrimination Act, despite warnings its existence means Charlie Hebdo would likely have been shut if published in Australia, or at the least would’ve had its content curtailed.

“Now, I rather like that cartoon,” Mr Abbott said.

“I’m not sure I would have liked everything that Charlie Hebdo produced but this is a cartoon of the Prophet with a tear streaming down his face, saying `All is forgiven’.

He said it remained the government’s position that it was not going to pursue changes “at this time”.

Human Rights Commissioner Tim Wilson said this week that 18C, which makes it unlawful to offend, insult, humiliate or intimidate on the basis of race, colour or national and ethnic origin, would have ensured that Charlie Hebdo could not have been printed in Australia.

Other experts have questioned the claim, saying Islam is a religion and not a race, and therefore would not be covered by 18C.

The latest Charlie Hebdo cover has also prompted both support and criticism from local Muslim leaders.

Sydney Muslim community leader Keysar Trad disagrees with reproducing the image of the Prophet – prohibited under some interpretations of Islamic law – but says the magazine is entitled to print what it likes.

Refugee advocate Jamal Daoud said everyone who believed in freedom of speech should condemn the attacks on Charlie Hebdo.

Mr Daoud told The Australian: “As Muslims, we have more responsibility than others to send our condemnation, we should come forward and say `not in our name’.”