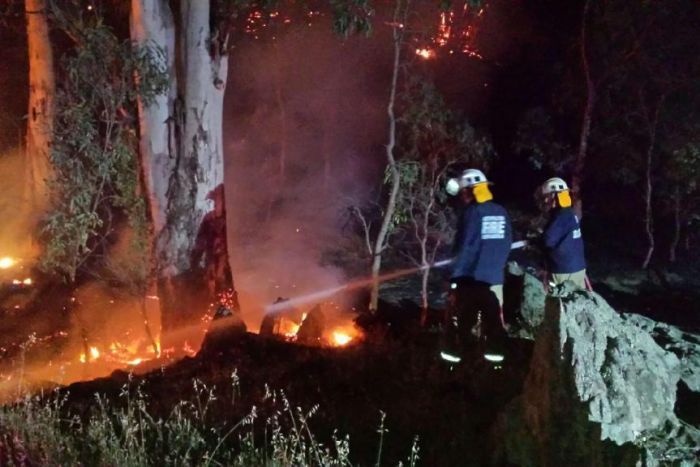 Residents of the Adelaide Hills are facing the worst fire conditions since the Ash Wednesday bushfires in 1983, the Country Fire Service says.

An out-of-control bushfire at Sampson Flat in the Southern Mount Lofty Ranges is expected to turn south because of extreme winds reaching up to 110 kilometres per hour.

• Lives, property under threat in Adelaide
• Warnings as Victoria prepares to swelter

About 150 firefighters have spent the night fighting the blaze near One Tree Hill, Crouch Hill, Millbrook Reservoir, Little Para Reservoir and Kersbrook.

The CFS expects a change in the wind direction will cause the fire to change direction or accelerate and move towards Gumeracha, Chain of Ponds, Forreston and Kersbrook near Little Para Road, Forreston Road, Adelaide to Mannum Road, Checker Hill Road, Hill Road and Northsworthy Road.

At least five homes have been destroyed, some of which are believed to be at Upper Hermitage.

It is understood hundreds of people have been evacuated to the Golden Grove Recreation Centre.

CFS state coordinator Brenton Eden said it was the most dangerous fire day since Ash Wednesday and anyone south of the fire ground should consider relocating.

“With 110km winds from the north over a sustained period anyone to the south of this fire, and that’s for quite some distance, five to 10 to 15km in terms of distance, needs to be adequately prepared for what we’re going to face today,” Mr Eden said.

“Overnight we have not been able to bring this fire under control in any area due to the terrain and that’s been in very gentle winds, not 110km an hour.

“I think the message that we need to get out to the community now is the Adelaide Hills are facing the worst fire conditions we have faced since Ash Wednesday, I don’t think there is any other way you can make that announcement.

“110kmph winds will put our firefighters off the fire ground, it will put our aircraft on the ground, there won’t be fire resources committed to this fire during that period.”

A community meeting that was due to be held at Kersbrook has been cancelled due to the conditions, but a meeting will be held at the relief centre at Golden Grove Recreation Centre at 11:00am (ACDT).

Another meeting will be held at the One Tree Hill Primary School at 3:00pm, unless conditions change.