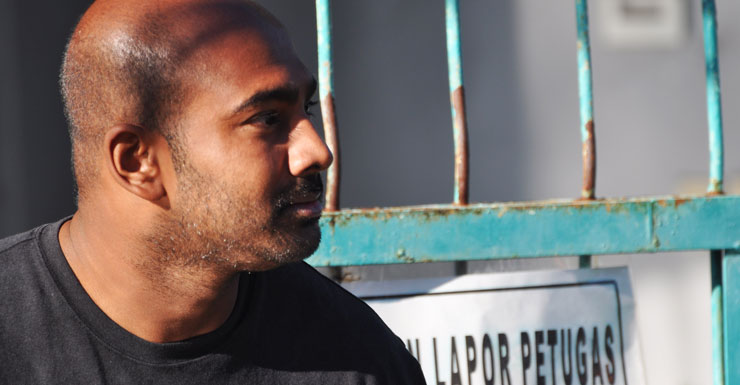 Bali Nine members Andrew Chan and Myuran Sukumaran have celebrated Christmas in Kerobokan jail, as Indonesia’s president continues to defend his support for the death penalty.

Christmas Day was marked with a modest service in the prison’s hall on Thursday morning, and although the pair arrived smiling, they did not speak to media.

• Bali Nine clemency rejected
• What will be the fate of the Bali Nine?

President Joko Widodo’s announcement earlier in December that he’s against granting clemency for drug offenders is a blow to the Sydney pair who were sentenced to death in 2006.

Five or six Indonesian and Nigerian citizens are expected to face the firing squad this year, while another 20 prisoners could be executed next year.

Prison governor Sudjonggo said the Australians were aware of the latest developments.

“They’ve never asked me about it,” Sudjonggo told reporters.

“From the look of it, I see them casually, there’s been no behavioural changes.

“Their emotional state is normal, nothing explosive.”

Sudjonggo says a psychological program is available for prisoners on death row but does not work with them one on one.

Kerobokan jail has 887 convicts when its capacity is 323.

Joko this week met with Indonesia’s two largest Islamic organisations to get their views on capital punishment.

He told reporters that 40-50 young Indonesians died every day due to drugs.

“That must be noted. That’s a day, not a year. One day,” he said, as quoted by Indonesian news website Kompas.

“I’ve said no clemency once, twice, three times, many times.”

Chan and Sukumaran’s appeal for clemency has been open for more than two years.

The pair has been working on projects to improve life and help rehabilitate their fellow prisoners – Chan through Christian outreach and Sukumaran through an arts program.

Head of Bali’s Law and Human Rights office, Nyoman Putra Surya, has announced cuts to the sentences of 63 inmates for good behaviour, including 12 foreigners.

The Bali Nine’s only female member, Renae Lawrence, has been recommended for a two-month sentence reduction and Edward Myatt, another Australian drug mule serving eight years, for one month.

The Christmas service was also attended by another of the nine, Michael Czugaj, and Australian Michael Sacatides, imprisoned for 18 years in 2011 over drug offences.