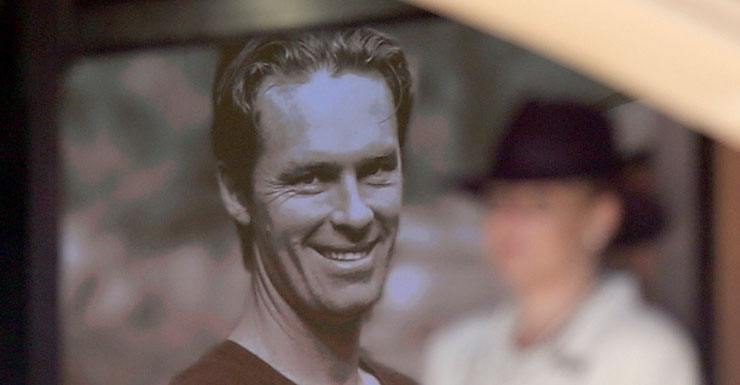 Mourners have farewelled Lindt cafe siege victim Tori Johnson at a private funeral in Sydney, while a separate service for the second victim, Katrina Dawson, remembered her outstanding professionalism.

The service for Mr Johnson, the 34-year-old Lindt cafe manager, took place at St Stephen’s Uniting Church only a few hundred metres away from where the siege took place.

At the private funeral service for Mr Johnson, his father Ken gave the eulogy and his partner Thomas Zinn also spoke.

The funeral booklet described the service as a celebration of Mr Johnson’s love, generosity and life.

Mr Johnson had been employed at the Lindt cafe since October 2012 and had worked at a string of other restaurants and hospitality companies around Sydney.

Mr Johnson was reportedly trying to wrestle the weapon away from the gunman when he was killed.

Sydney lawyer Ms Dawson was having coffee with a pregnant friend in the cafe when they were taken hostage.

Ms Dawson was fatally shot during the siege, which ended when police stormed the building 16 hours into the incident after hearing shots from inside.

She was farewelled at a memorial at the Sydney University Great Hall.

“She was universally liked and respected and occasionally feared by her opponents,” he said.

“Her qualities matched what every barrister should aspire to be – seriously intelligent, ethical to a fault, unfailingly fair and supremely efficient.”

“She was the most beautiful person physically and spiritually,” he said.

“The cakes she baked for the kids’ birthdays were legendary, the outfits she prepared for their dress up parties were worthy of the stage.

“Her love for her children was limitless.”

Her friend Julie Taylor, who was also held hostage, paid tribute to Katrina at the service.

“Katrina’s greatest love was for her family, she made me want to be a wife and a mother,” she said.

A friend of Katrina’s from her time as a student at Sydney University’s Women’s College, Sally Webb, also spoke at the service.

She said she would never forget how Katrina’s son Ollie spoke about what had happened to his mother.

“My mummy is in heaven and heaven is in my heart so mummy will be with me all the time,” Ms Webb recalled.

The song Somewhere Over The Rainbow was requested by Ollie and was performed by a choir.

A private funeral was held for Ms Dawson on Monday.

Ms Dawson worked as a barrister at Selbourne Chambers in the CBD and had three young children.

She was married to Paul Smith, a partner at Mallesons, whom she met while completing her clerkship at the firm.

Survivors of the siege along with Mr Johnson’s family and friends laid flowers in his memory at a marquee near the Lindt Cafe following the funeral.

Sydney of City workers and volunteers had this morning begun removing the floral tributes laid at Martin Place due to forecasted wet weather.

Notes, messages and cards attached to the thousands of bouquets were to be given to the victims’ families.

NSW Premier Mike Baird said people could still pay their respects by leaving flowers at the marquee near the cafe.