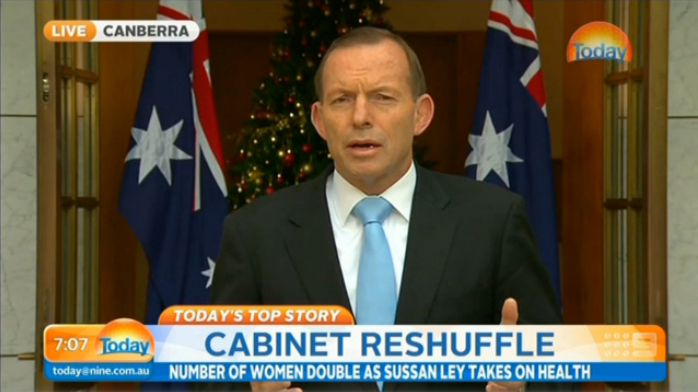 Tony Abbott might be an ironman, but he is no ‘iron man’.

At least not according to the women of Australia.

The prime minister drew the ire of social media, Labor and the Greens when he claimed that his greatest achievement as minister for women was to repeal the carbon tax.

Just a day after doubling the number of women in cabinet – to two – Mr Abbott was back in the gender dog house.

Speaking to the Nine Network’s Today show on Monday morning, the PM said his decision to remove the tax benefitted women because household budgets received a boost.

“Well, you know, it is very important to do the right thing by families and households,” Mr Abbott told host Lisa Wilkinson.

“As many of us know, women are particularly focused on the household budget and the repeal of the carbon tax means a $550 a year benefit for the average family.”

This caused a flurry of criticism on Twitter linked to the trending hashtags #thankstony and #PutYourIronOut.

Ever since the repeal of the carbon tax I have been able to enjoy a glass of chardy while waiting for the iron to heat up #ThanksTony — Tracy Walker (@thewollemipine) December 22, 2014

Now the carbon tax is gone, I can get back to the kitchen & knit some new saucepans. Such a treat. #ThanksTony

Others were more critical.

“Thankstony for setting women and families back a few decades,” one Facebook user said.

“Well he wasn’t lying. Pity the only woman to benifit (sic) from repeal of carbon tax was Gina Reinhardt (sic) #ThanksTony,” one man tweeted.

For some, Mr Abbott’s remark revived memories of another carbon tax comment in 2010 when, as opposition leader, he claimed its impact on electricity prices would impact greatly on women as they did the ironing.

Greens leader Christine Milne said “he might as well have said his greatest achievement was to help women buy a better iron so they can stay home and iron more often”.

The prime minister also highlighted his government’s impending “fair dinkum” paid parental leave scheme, proposed improvements to child care and the promotion of a second woman to his front-bench.

Sussan Ley was promoted to the health ministry and cabinet, while Kelly O’Dwyer and Karen Andrews were promoted as parliamentary secretaries.

“Obviously I’m very pleased to be able to promote three women in my own ministry yesterday,” Mr Abbott said.

“What’s good for women is good for the community generally.

“I think the Prime Minister was focusing on the policy change that would have the largest impact on families and households and getting rid of the carbon tax is certainly that.”

But Labor frontbencher Anthony Albanese slammed Mr Abbott’s response, saying it demonstrated he was “stuck in the past”.

“There is no issue too big for Tony Abbott to show how small he is as a thinker,” Mr Albanese told Fairfax Media.

“The problem isn’t that Tony Abbott’s stuck in the past, it’s that he wants the rest of Australia to go back there and keep him company in a world where men do the big jobs and women do the ironing.”