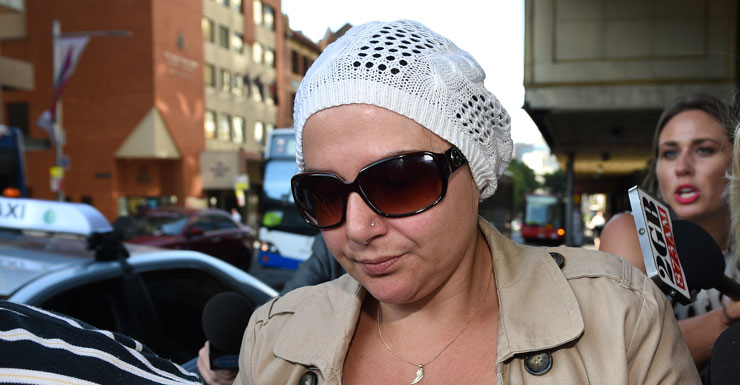 The former partner of Sydney siege gunman Man Haron Monis is in custody after her bail was revoked.

The day-long legal proceedings in the Downing Centre Local Court were punctuated by two breaks before Magistrate Graeme Henson made the decision that sent Amirah Droudis to Silverwater jail on Monday evening.

“I find there is an unacceptable risk that cannot be properly mitigated by a further extension of current bail or bail in different terms,” he said.

Droudis, 34, was in November 2013 charged with the murder of Monis’ former de facto and mother-of-two Noleen Hayson Pal.

The decision to revoke her bail comes after NSW Attorney-General Brad Hazzard last week asked the Director of Public Prosecutions to immediately review the first bail decision, after questions were raised about Monis’ own bail arrangements.

Deputy senior Crown prosecutor John Pickering SC on Monday argued Droudis posed a risk given the content of a video which was tendered to the court, and in which she spoke about terrorism.

“There is no evidence that view has changed,” he told the court.

Mr Pickering noted Droudis hadn’t breached any conditions of her current bail but said the crown had worries her extremist views were “still operative”.

Droudis’ defence argued the DPP application was frivolous and based on irrelevant evidence.

“The video appears to be nothing more than … (Droudis) being a spokesperson for Mr Monis,” her legal representative told the court.

In revoking bail, Mr Henson noted the presumption of innocence was one of the cornerstones of Australia’s legal system.

“In this application, it was not the function of the court to elevate the assertions of the crown or the response from an accused person to a status of fact,” he said.

Monis was on bail when he took 18 people hostage inside the popular Lindt Chocolat Cafe in Sydney’s CBD last week.

Monis had been in and out of custody at various periods in 2013 and 2014 after being charged with a number of offences, including being an accessory to the murder of Ms Pal.

Then, six days after new NSW bail laws came into effect, Monis was charged with fresh offences relating to the aggravated indecent and sexual assault of a woman in 2002.

Droudis’ case is due in Penrith Local Court on February 27 when she will appear by audio visual link.