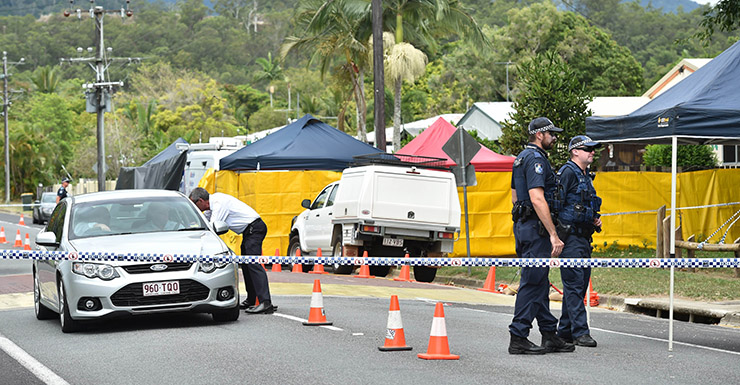 The home where eight children were murdered in Cairns in far north Queensland will be demolished and a permanent public memorial built on the site, authorities say.

Community members united in grief are continuing to lay tributes at a fig tree in the park next to the home in Murray Street at Manoora where four girls and four boys, aged between two and 14, were found dead on Friday.

Police have said they would not name the children for cultural reasons.

Cairns MP Gavin King said after discussions with the family, local residents, agencies and Housing Minister, he believed the public housing home should be demolished.

He said the State Government would be guided by the family, traditional owners and the local community about what form a permanent memorial on the site should take.

“I started that conversation on Saturday morning down at the site with various family representatives and local residents and various agencies,” he said.

“I’ve asked the Cairns Safer Streets Taskforce to lead some of that consultation with the community, along with the police liaison officers who have been doing a fantastic job down there.

“They’ll consult with both the family and traditional owners and local residents.

“It certainly won’t be the State Government coming in over the top and deciding what that will look like, or indeed the timing.”

Acting Assistant Police Commissioner Paul Taylor also said the home would be torn down and a public memorial would be built there after investigations were finalised.

“We’re unable to set a timeframe – we’ll finish with the house when we finish with it,” he said.

Woman in hospital under police guard

Mersane Warria, the 37-year-old mother of seven of the children and aunt to the eighth, was on Sunday charged with eight counts of murder at a bedside court hearing in the Cairns Hospital, where she remains in a stable condition under police guard.

An older brother discovered the bodies of his siblings on Friday, as well as his mother, who was bleeding from stab wounds.

A spokesperson for the Cairns Magistrates Court confirmed on Sunday that she had been remanded in custody.

A Cairns magistrate this morning adjourned the matter until a court hearing next month.

Police said earlier the alleged killer would not appear in court on Monday because of her injuries and state of mind.

Her lawyer, Steve McFarlane, asked for the matter to be referred to the mental health court, but that request was refused by Magistrate Alan Comans.

No plea was entered and there was no indication a bail application would be made at this stage.

Warria was formally remanded in custody and would not be required to appear when the matter returned to court on January 30.

Outside the court, Mr McFarlane said his client had not yet received an official mental health assessment.

He said the case could not progress until she left hospital.

Mr McFarlane said he was not sure how long his client would remain in hospital.

“I’m not a doctor – I think she probably knows what’s happened but doesn’t realise it – it hasn’t sunk in – is my personal opinion only,” he said.

“I’m aware she’s been visited by some people – how close a family member they are and how many there are, I don’t know.”

Detective Inspector Bruno Asnicar said the home in Murray Street remained a crime scene and the investigation was just beginning.

“We have still got experts there – it’s going to be a long, hard road from here on in – a great deal of the work starts now,” he said.

“We are not even a tenth of the way through. There is a lot more work to be done and we will just keep doing it.”

He said hundreds of witnesses had given statements to police.

Detective Inspector Asnicar said it had been a difficult time for all involved.

“All of the family has been advised and it would come as no surprise that this is very raw, it’s a very emotive time for everybody,” he said.

“The family is deeply, deeply upset, but the community is pulling together.”

More services were held across Cairns overnight in memory of the eight children.

Churches and private homes across Cairns were filled with family, friends and community members wanting to pay their respects.

Hundreds also attended a memorial gathering on Sunday night at the Trinity Bay High School where one the children who died had been a student.

Pastor Adem Xhafer acknowledged the community’s suffering at the service.

“Today in our hometown of Cairns it’s been a most difficult last few days and many hearts are hurting, many hearts are bleeding, and hard to reconcile the events with normal everyday living,” he said.

“Many are wondering how they’re going to get on in the future from today forward – how do we deal with that? It’s a tragedy.”

On Sunday morning there were emotional scenes as family members attended a memorial near the home where the children died.

Families of the deceased children were continuing to arrive in Cairns from across Australia as part of a traditional mourning period ahead of their funerals.

Cairns Mayor Bob Manning said the community had conducted itself with great dignity and respect since Friday’s tragedy.

“I think that’s been just wonderful – you feel very proud to see our community reacting in that way,” he said.

“There’s also been lots of great offers of assistance and help and again that shows a certain level of caring within the community.

“I think generally speaking the community has acted very properly in this last 72 hours.”

Call for donations to support family

Mr King said people who wanted to make financial donations to support the family could contact Uniting Care Community on 1800 543 354 or go to their website.

“We’d also like to see some of those financial contributions go towards a public memorial,” he said.

Mr King said the Salvation Army was also setting up two houses in Cairns for visiting family members who were coming from across the state to stay in the city during this time.

He said people who wanted to donate household goods for the houses should take items to the Salvation Army depot on Hoare Street in Manunda.

“Those two houses require things like lounges and various household items,” he said.

“Indeed down at the community hub this morning there were a few people who turned up with offers of things like lounges.

“The Salvation Army will distribute those goods to those extended family members.”

Salvation Army Captain Darren Kingston said it was also maintaining a presence at the Manoora site where the children were killed.

“We’ve been able to mobilise some troops to be down there providing coffee and tea and cold drinks and also lunches for the last couple of days – we’ll be there for as long as it’s needed,” he said.

“We’ve actually been able to gather the other churches together as well to be involved in what we’re doing so we’ll be able to go on as long as we need to go.”

Cairns house will be demolished