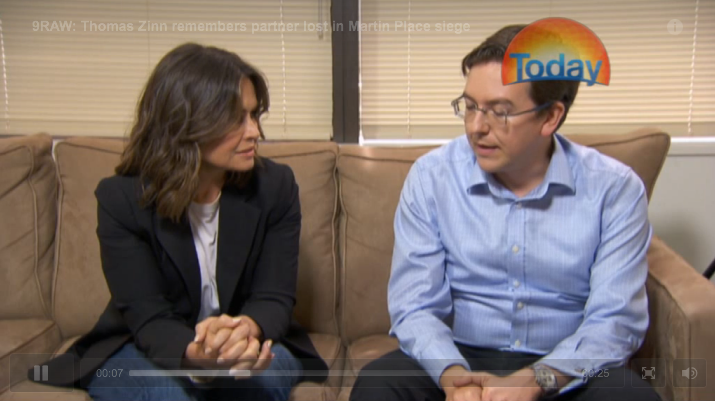 The partner of Sydney siege victim Tori Johnson has fondly recalled how he loved flowers, saying he would have appreciated the growing floral tribute in the city’s CBD.

The memorial in Martin Place began hours after Mr Johnson and fellow hostage Katrina Dawson died after being held with 15 others for 16 hours by a gunman in the Lindt cafe.

Thomas Zinn told Nine Network the public memorial has been a source of comfort in his grief and that of Mr Johnson’s extended family.

“Yes, Tori loves flowers,” he said in an interview broadcast on Friday.

“This is probably the most beautiful thing, you know, and I’m sure he can see it.

“When I was down there … I could smell the flowers through Sydney and I think it is just amazing that he has been able to make our city smell like flowers. I think there is no more beautiful thing that he could have imagined.”

Mr Zinn and Mr Johnson had been together for 14 years.

Asked how he would like the world to remember his partner, Mr Zinn replied: “I would like him to be remembered as a humble and very generous person”.

“He really made it clear that family is the most important thing in our lives.”

“It is still very early, but we know that they feel exactly like us,” he said.