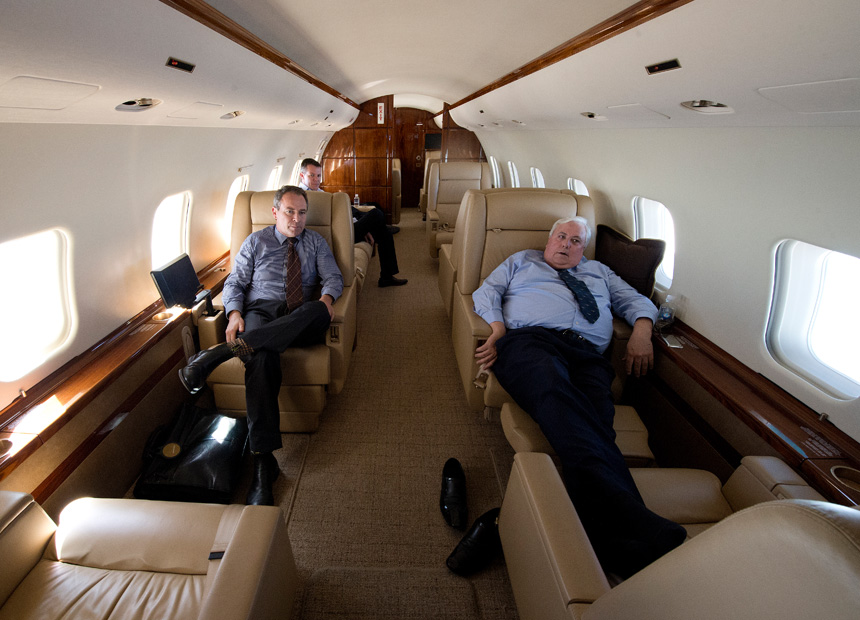 Clive Palmer’s media advisor has been arrested and charged with attempted kidnapping in a case which police have called “bizarre” and “very elaborate”.

Andrew Crook, the head of Crook Media, was detained by Queensland police after a raid on his Brisbane home on Friday morning by the Taskforce Maxima criminal economy team.

Queensland Police Detective Superintendent Michael Niland said Mr Crook and two other men allegedly lured a National Australia Bank executive to an Indonesian Island under the premise of a job for Mr Palmer, then attempted to force the man to retract evidence he gave to a civil trial in 2012.

“We will allege that the two men arrested today led a National Australia Bank employee to an island in Indonesia on the false assumption that he was going to be interviewed for a high paying job as a finance manager for a global company,” Supt Niland said.

“We will allege the real reason was to extract a confession from the bank employee and make him change and retract evidence he gave during a civil trial in the Supreme Court in Queensland in 2012.”

Taskforce Maxima was set up in October 2013 to disrupt, dismantle and eliminate criminal motorcycle gangs in Queensland.

Supt Niland said the job being offered was a global finance manager role which didn’t exist, and that Mr Palmer was in no way involved in the case.

“I want to categorically state that Mr Clive Palmer is not involved in this investigation in any shape or form whatsoever.”

“In essence he is a victim of the circumstances of this case where his name has been used by three offenders in effort to lure our victim, the National Australia Bank executive, to an island in Indonesia.”

Mr Crook appeared in Brisbane Magistrates Court on Friday, where he was granted conditional bail.

Barefooted and wearing a shirt and shorts, Crook sat in the dock with his arms folded across his chest. He kept his gaze focused on the magistrate, avoiding any glances in a public gallery full of journalists.

His lawyer argued that Crook had no prior convictions and was not a flight risk having owned a business for the past 20 years in Brisbane.

Crook was granted bail with conditions, including that he does not contact any of the co-accused, the witnesses, NAB employee and that he surrender his passport.

Speaking to Fairfax media, Mr Palmer said the arrest of his media advisor was politically motivated.

“The timing seems to be a little bit strange… it does seem coincidental that this is happening just before the state election,” Mr Palmer said.

He said he was concerned Mr Crook’s computers had been seized, because they contained the Palmer United Party’s political strategy for the Queensland state election.

“I’m not saying police would do anything untoward, but naturally enough you would be concerned about the confidentially of the material.”

Supt Niland, however, denied these allegations.

“From those conversations [with Mr Palmer] this morning, there was talk that there was some political overtones, but this commenced as a Taskforce Maxima investigation.”

An arrest warrant for a third man, who lives overseas, has been issued.

“I think police have access to all the phones, computers and information at the office,” Mr Palmer said.

Mr Palmer will seek to clarify the situation with Mr Crook, saying he’ll continue to be a client for now.