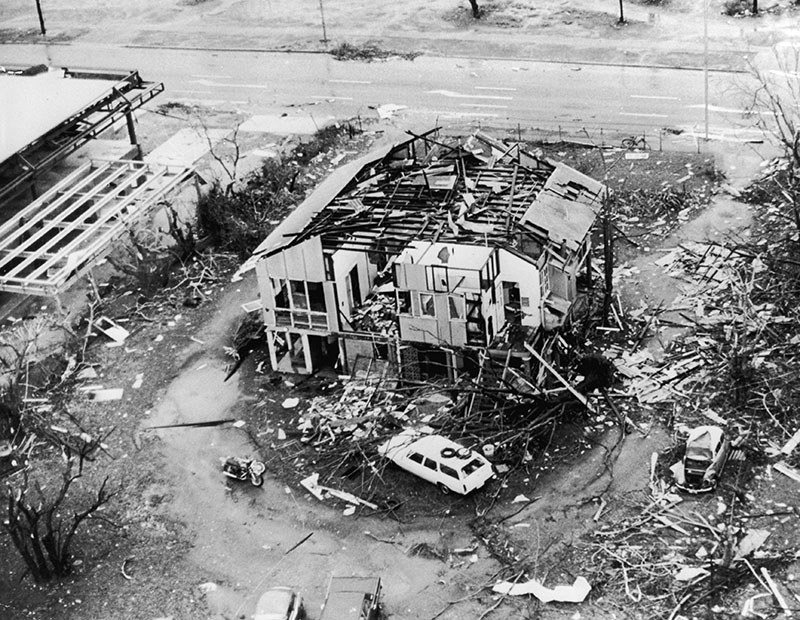 Cyclone Tracy has been described as the perfect storm, but compounding its sheer force was the fact that it hit Darwin at a time when it was vulnerable, complacent and distracted.

Warnings fell on deaf ears after a near-miss cyclone weeks before and the numbing effects of the festive season in full swing.

But how ready is modern Darwin for a similar disaster?

Gary Casey was living in Nakara, in Darwin’s northern suburbs, with his new wife when Cyclone Tracy decimated the city.

He described Tracy as “a big wake up, a big learning curve”.

“I don’t think anyone was really prepared because no-one expected the damage that had been caused,” he said.

Mr Casey said it took time after Cyclone Tracy for the rescue and recovery effort to get started.

It involved leadership from the outside, the then Major General Alan Stretton, which was a blow to the confidence of Territorians.

“Having Stretton come in to do the clean up and organise the rebuilding and stuff, it was just beyond the NT’s capability at the time, there just weren’t enough people,” Mr Casey said.

Mr Casey, who was a NT Police sergeant and emergency services volunteer for a total of 40 years, said the city had learnt from the devastation of Cyclone Tracy and was now much better prepared.

“There’s certainly a lot more plans in place, a lot more structure and they have the drills and the equipment,” he said

“But we don’t really know until it hits, and then it’s a matter of getting out after and getting the aid out there.”

Mr Casey said that involved deploying the survey and rescue teams and the Defence Force, and launching each community’s individual cyclone plan.

The warning fell on deaf ears, quick money was being made during a record breaking building spree and I get this sense of déjà vu.

In the event of a cyclone, the Territory’s Police Commissioner, John McRoberts, would act as the Territory controller and chair the emergency council.

“There is clearly an expectation that the community expects its emergency services to be well prepared for any crisis that comes,” he said.

“Now we have a very robust, tried and tested procedures as well as statutory authority to fulfil out obligations of creating and maintaining a safe community through the Emergency Management Act.”

Each year ahead of the cyclone season simulation exercises test the skills and preparedness of the Northern Territory’s three main emergency services arms.

The director of the Northern Territory Emergency Service, Andrew Warton, is responsible for running the simulations.

“Since Cyclone Tracy the field and practice of emergency management has grown exponentially,” he said.

This year it involved a search of a ruined school and recovering injured or dead bodies.

“There were some good lessons learnt from that exercise in terms of communication, in terms of timeliness in reporting information and coordination between the different agencies,” Mr Warton said.

“There’s always room to test and improve that integrated approach to emergency response.”

This year’s exercise also gave rescue workers a chance to test a new communications system, WebEOC, which connects those on the field with the people working inside the emergency headquarters at Berrimah Police Station.

The mobile technology has several purposes.

“This for all intent and purpose is the record, this is where information is logged, where decisions are made and decisions are recorded,” Mr Warton said.

“You can also see who’s in charge, who’s the incident controller, who the operations controller is, and how many shelters are actually open, what the capacity is and how many people we’ve got in them at the moment.”

In the case of a cyclone, the room that would be the nerve centre of the response would be filled with people from police, fire, emergency services and logistical operations providing food, shelter and infrastructure.

The room would be divided into working areas for planning, logistics, operations, messaging and media with the aim to coordinate efforts between government and non-government agencies.

‘Prepare to look after yourself after disasters’

Forty years ago this level of preparedness could not have been envisaged.

But the NT Police Commissioner warned Territorians to have realistic expectations about what emergency services could provide and achieve.

“Let me make it very clear that when you’re dealing with an incident the magnitude of Cyclone Tracy it’s reasonable to expect that not everything that should be done will be done or can be done,” Mr McRoberts said.

You should focus more on what you’re going to do in the later stages of preparation, instead of picking up slabs of beer from the bottle shop.

He also cautioned residents against the same sense of complacency that plagued Darwin prior to Tracy.

“It’s fair to say there is and continues to be a level of complacency that we’ll be okay, or this may not be something we need to take notice of,” Mr McRoberts said.

Mr McRoberts referred to the book Remembering Cyclone Tracy: Lessons From A ‘Perfect Storm’, by Kevin Murphy, which describes how Darwin in 1974 was “riding a new wave of prosperity”.

“The [cyclone] warning fell on deaf ears, quick money was being made during a record breaking building spree and I get this sense of déjà vu,” he said.

He said it was quite likely Darwin would experience another Tracy and residents needed to have their own emergency plan ready.

This involved putting together a cyclone kit, boarding up homes and clearing yards of any furniture or potential flying missiles.

“If you stay in your own home and you’ve got your cyclone kit ready, you can pretty well look after yourself and things can happen from there.”

Mr McRoberts had one final warning for Darwin’s population.

“You should focus more on what you’re going to do in the later stages of preparation, instead of picking up slabs of beer from the bottle shop,” he said.