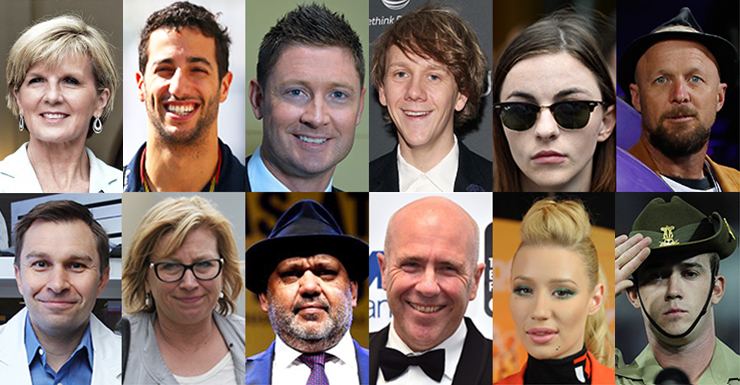 Terror, searing heat and wild, wild weather, conflicts and viruses that mutated and grew ever more ghastly, planes that fell from the sky in unexplained and unimaginable ways – the world grew more dangerous, more grim in 2014. In the saddest of ways, the appalling Sydney siege defined for Australians a year that was itself defined by sadness, loss that touched us deeply – Katrina Dawson, Tori Johnson, Phillip Hughes, Luke Batty – and fear. Too much fear.

And lift us they did: a mother who showed extraordinary courage while confronting the violent death of her son; a cricket captain who led the nation in its grieving for a crowd favorite; an indigenous leader who spoke for the nation when one of its greatest prime ministers finally passed.

Elsewhere there were those who fought our battles, conquered far-flung worlds of science, arts and sport or simply spoke up when it would have been so much easier to remain silent.

We were never quite sure what Tony Abbott meant by the term, ‘Team Australia’. But if it was supposed to convey notions of courage, strength and understanding and a spirit of shared purpose and ideals, then we choose these dozen Australians as the ones we admired most in a year that might otherwise have defeated us. Rosie Batty entered our hearts and consciousness in February after she witnessed the brutal murder of her 11-year-old son, Luke, at the hands of her mentally ill, former partner while the boy and his father practised cricket in Tyabb, south of Melbourne. We thought she would slip from view, as she was surely entitled to do. But not Batty. The morning after, she walked out her front gate and with supreme dignity and grace shared with the nation her family’s sad story. “No matter how nice your house is, how intelligent you are, it can happen to anyone, and everyone,” the grieving 50-year-old said. In just 10 short months, Batty’s fight for her son’s legacy has seen her become the face of the fight against domestic violence, Victorian of the Year and, most importantly, inspire millions with her bravery. Whether it was the earring, the tipped blonde hair, the Lara Bingle fling or Warnie taking him under his wing, for a long time Australia had trouble embracing Michael Clarke. We eventually warmed to him when the runs and the wins started to flow – an Ashes whitewash tends to do that – but the relationship was cemented in the hours and days after November 27. That was when his close mate and “little brother” Phillip Hughes died and Clarke became mourner in chief. After the tragedy, Clarke went from a cricketer known for runs and brave declarations to a leader who grieved openly, lovingly and compassionately with the Hughes’ family and the nation. Clarke transcended his sport, bared his soul and showed the true meaning of the word leadership. Australian captain, indeed. When he stepped up to to deliver his eulogy to former prime minister Gough Whitlam, he was a respected lawyer, academic and Aboriginal land rights activist. When he stepped down, he had delivered perhaps the greatest eulogy in Australian history. At the public memorial, Mr Pearson captured the mood with nostalgia, respect, humour and grief. Pearson did not use the former PM’s name, following the Aboriginal convention of not naming a recently deceased person as a mark of respect. He told of the positive impact of Whitlam’s reforms, such as the Racial Discrimination Act, on his own life. “This Old Man was one of those rare people who never suffered discrimination, but understood the importance of protection from its malice,” he said. If any politician has risen above the fray in 2014, it’s Foreign Minister Julie Bishop. In September she was rated the coalition’s most popular politician, and while some claimed she has it easy next to an unpopular PM, there’s no doubt Ms Bishop is a voter favorite. She defended Australia with self-assuredness and dignity amid the MH17 tragedy and pulled Tony Abbott up on the decision not to send her to climate talks in Lima. More than anything, she appears to love going to work, describing her current role as her “dream job” and refusing to play the gender card. This, despite her being the only woman in federal cabinet. While the government about her struggles to find its way, Bishop discharges her duties with an assuredness her Cabinet colleagues – and leader – would do well to emulate. After years on the stand-up comedy circuit, Gen Y poster boy Josh Thomas had a breakout year, moving from entertainer to defender of decency when on national TV he tackled Bob Katter’s outmoded views on homosexuality. Using humour and a disarming personal honesty, Thomas confronted Katter in an intergenerational stoush to emerge an unlikely hero (and taught the country about gay dating app Grindr in the process). Professionally, Thomas’s acclaimed ABC2 series Please Like Me was a hit in the US, picking up an International Emmy nomination and gaining an army of fans on hip cable channel Pivot. Locally, the autobiographical comedy-drama never got the ratings it deserved, but has been picked up for a third season in 2015. Australia definitely likes him. Freya Newman risked prison and a criminal conviction to reveal information very much in the public interest. If not for her ‘hacking’ the computer system of her former employer, we would never have known that the Prime Minister’s daughter Frances Abbott studied almost for free at The Whitehouse Institute of Design in Sydney while her father’s government tried to saddle every other university student with higher fees and hefty interest rates on loans.   That Newman was forced to plead guilty to a criminal offence is a failing of a legal system that protects whistleblowers in the public sector, but not those in the private sector. Our audience agreed there was no guilt to absolve. As one reader commented at the height of the saga: “Freya Newman, you have the respect of thinking Australians.” Everyday, Australian anti-ageing biologist Sinclair gets closer to his goal of finding the fountain of youth. The Harvard University genetics professor discovered a chemical that reverses the ageing process in cells and opened the door to the possibility of living longer in a healthier body. But that’s not all. He’s also looking at how a particular enzyme can be targeted with drugs to potentially prevent age-related diseases such as Alzheimer’s, some cancers and Type 2 Diabetes. Recognition for his work finally came this year when Sinclair was named one of Time magazine’s 100 most influential people of 2014 and received numerous awards including the Australian Medical Research Medal. His is a story of resilience, brilliance and science at its best. And that never grows old. As disturbing reports about the deaths of civilians in Syria emerged in early 2014, a serving solider told The New Daily: “Everyone still in the army or that has left wants to go NOW, not because we want war, but because we want to help.” With the world watched a Syrian humanitarian crisis unfold, Australian soldiers showed they have a fierce sense of justice and a desire to protect, regardless of how the debate about their involvement in a conflict is playing out in the press at home. They set aside politics, personal feelings and pay scales to put themselves in harm’s way time and time again in theaters of war miles from home. For Australia’s defence forces, that’s known as going to work. They are voiceless, their work is invisible, and the danger they face is unimaginable to most of us, but without them we would not be the nation we are. The Maslin Family
On behalf of the MH17 & MH370 victims

Of all the terrible events that unfolded in 2014, the loss of two Malaysian Airlines aircraft – MH370 and MH17 – barely four months apart, were the most unfathomable. Australians felt the losses more keenly than most, with 42 citizens and residents among the 537 passengers and crew killed on the two ill-fated flights. Perth’s Maslin family suffered especially, losing three children and a grandparent when MH17 was blown out of the sky over the Ukraine. On board were Mo, Evie and Otis Maslin, aged 12, 10 and 8, and their grandfather Nick Norris. For surviving family members the grief was “hell beyond hell”. But they were not alone. Theirs was the grief of families all over the world. The Maslins reminded of the fragility of life and the strength it takes to cope with inestimable grief. The 24-year-old from the tiny NSW town of Mullumbimby took on the male-dominated American rap industry and won. Iggy Azalea’s debut album The New Classic had people paying attention immediately. She’s more than a rap artist though – she’s a pop phenomenon. In May she became one of only two artists to ever fill both the first and second spots on the Billboard 100. (The other was a band called The Beatles.) But we admire her for what she did next. Her rise sparked vicious personal attacks and she was forced to fight sexism. Snoop Dogg insulted her appearance, Eminem rapped about raping her, and she was sexually assaulted at her concerts. The star responded with maturity and sass. She beat the Americans at their own game and won a legion of admirers in the process. Novelist Richard Flanagan is an enthusiast for what makes Australia what it is – and what it ought to be. He won this year’s Booker prize for his novel The Narrow Road to the Deep North, the story of an Aussie prisoner of war working on the Thai-Burma “death railway” in World War Two. Flanagan’s father was interned there. After winning the 50,000 pound prize he used the platform to attack the government’s environmental stance, saying it made him “ashamed to be an Australian”. When selected joint winner of the Prime Minister’s Literary Award, he gave his entire $40,000 prize to the Indigenous Literacy Foundation. His generosity was inspiring.  After winning the Booker, he revealed he would have had to work in Tasmania’s mines if not for the prizemoney that went with it. It has taken little time for Ricciardo’s broad Sicilian smile to win over sports fans. Although he was stripped of his podium finish in the Australian Grand Prix, the irrepressible 25-year-old from Perth almost swept all before him in 2014, nailing third place in the F1 world championship. A few days after Ricciardo’s win at the Canadian Grand Prix, Red Bull Racing supremo Helmut Marko called on Ricciardo’s teammate, reigning world champion Sebastian Vettel, to “raise his game”. Vettel’s junior teammate was trouncing the four-time world champ. Ricciardo’s grin and unaffected personality have already made him a marketer’s dream. His talent won him two more grands prix and confirmed he’s a young man poised to reach the summit of his sport. We’re betting he gets there. Fast.

The twelve Australians we most admired in 2014