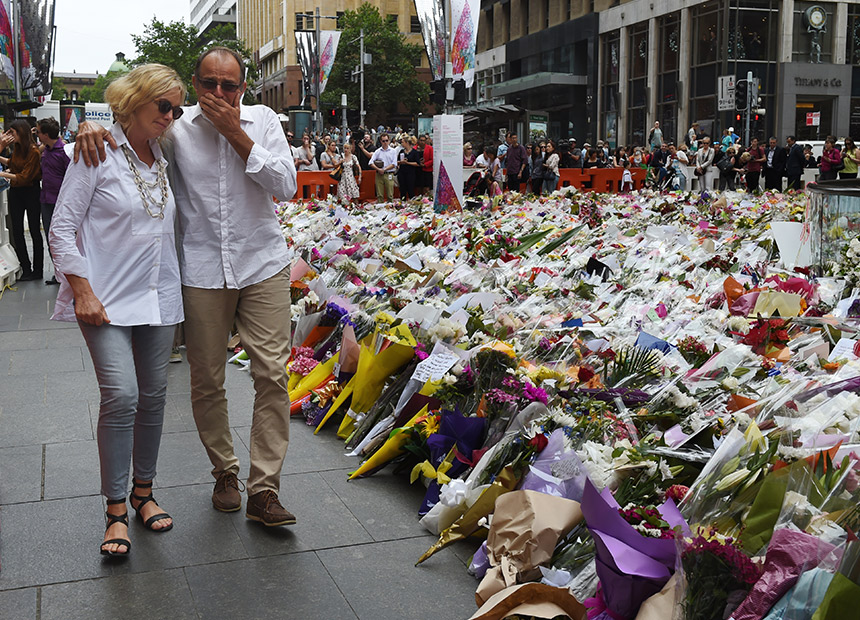 Cafe hostages Tori Johnson and Katrina Dawson were reportedly shot by Man Haron Monis moments before police stormed the shop and killed the gunman in a hail of gunfire.

Mr Johnson was shot by Monis at close range, according to the Nine Network, while News Corp Australia reports Ms Dawson was struck in the body by the self-proclaimed Islamic cleric who had held them and 15 others hostage in the Lindt cafe in central Sydney for more than 16 hours.

• Abbott announces review into Sydney siege
• Gunman’s ex-partner feared he would shoot her
• Tribute to the lost shows Australia’s true colours
• Why was the Sydney gunman on our streets?

It’s believed Monis opened fire at the pair after a group of hostages escaped the Martin Place cafe at around 2am on Tuesday after he told them they would be “dead in the morning”.

As more details of the siege came out on Wednesday, authorities were under increasing pressure to explain how Monis, a man with a long criminal history and links to extremism fell off watchlists and was granted bail.

Prime Minister Tony Abbott said an urgent and wide-ranging review would also examine how the man who was facing charges of being an accessory to the murder of his former wife was granted asylum, citizenship and welfare benefits.

“And we do need to know why he seems to have fallen off our security agencies’ watch list, back in about 2009.”

Mr Abbott said there were questions to be asked when someone with such a history of infatuation with extremism, violent crime and mental instability should be in possession of a gun licence.

Court documents from 2011 reveal Monis had a gun licence while working as a security officer but it had expired.

But NSW Police on Wednesday said there’s no record of Monis having held a firearms licence.

The prime minister’s comments came on another emotional day in Martin Place, where the family of cafe manager Mr Johnson visited the makeshift shrine that has become an ever-growing technicolour sea of flowers in tribute.

“This love comes for free,” Ken Johnson, father of the 34-year-old, said at the shrine.

“We want to thank everybody for supporting us through this terrible time.”

Ms Dawson’s brother and his family also visited the shrine to place flowers for the mother of three.

While at the shrine, the Johnson family embraced Sheikh Wesam Charkawi, who told them the Muslim community was with them at this time.

“It’s very important to let them know we feel their pain and their suffering,” he said.

Mr Johnson’s aunt Lyn Whittaker spoke to the ABC and said she received the phone call early on Tuesday morning that her nephew had died.

“The phone rang about 4:30 in the morning and it was Ken, my brother, and he said ‘they’ve killed my beautiful boy’ and he couldn’t speak anymore,” she said.

“The police officer came on and told my husband that Ken couldn’t speak any more and this is what has happened.

“Tori had copped a bullet from this terrorist and he had gone.”

Ms Whittaker said her nephew was a selfless person, and “everything you could wish for in a son and grandson”.

“A very, very, very brave boy, everything that people have said about Tori he was just the most caring, kind, gentle person,” Ms Whittaker said.

“He really was everything, he had all the qualities of just a beautiful soul.

Mourners lined up in their hundreds for more than nine hours at the floral shrine, in a gesture that NSW Premier Mike Baird has described as the city’s beating heart.

Former prime minister John Howard was among others who shared in the outpouring of grief on Wednesday.

A female member of the Johnson family said: “It’s very powerful for the family to see this, it’s very moving”.

Roma Herat, the mother of hostage Joel Herat, on Wednesday said her son had told her he was certain he would be killed if he did not run.

It was 2am, and Monis had told them death would come in the morning.

“Joel said to us `Mum, if we didn’t get out now, we were going to die’. The terrorist said to them it will be in the morning. And they said, ‘no, we’re going to get out now’.”

When Monis turned his back, they smashed a lock off a door and made a run for it.

Snipers didn’t shoot Moris because of fears he was packing explosives.

NSW Police Commissioner Andrew Scipione was forced on Wednesday to defend how his officers brought the CBD siege to a dramatic end after questions were raised about their actions.

In the early stages of the siege when Monis was spotted through the glass, it was unclear whether he was carrying explosives, how many hostages were inside and even how thick the glass was, he said.

“They were still getting their facts together and working out what the best strategy was,” he said.

Responding to reports the elite SAS could have been brought in to help, Mr Scipione said the protocol for handing the situation to the military wasn’t reached.

“(The NSW officers) are not just well-trained, they are well-practised because they do this every day,” he said.

“As opposed to a group that may not do it as often.”

Ken Johnson ‘could not speak’ after Tori’s death