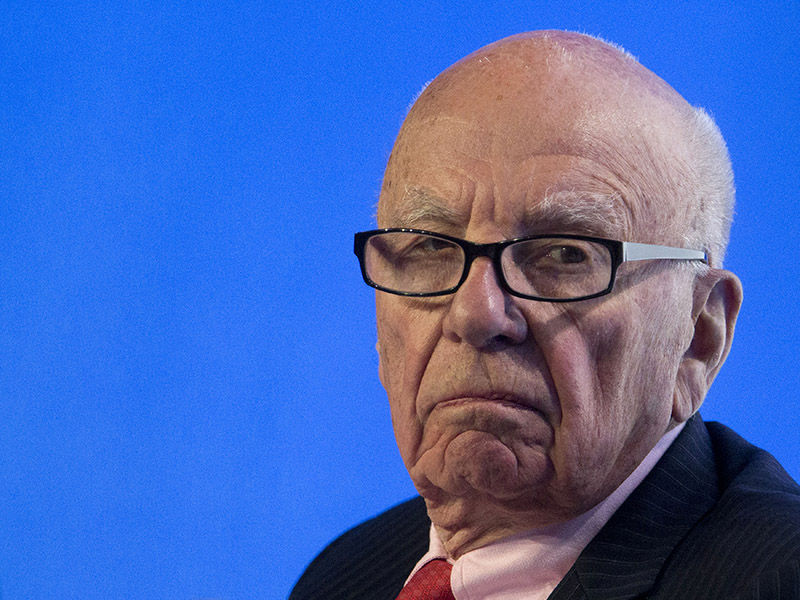 Cross asks Gittes what he knows about him.

“Mainly that you’re rich and too respectable to want your name in the papers,” replies the private investigator.

Maybe so, but there will always be exceptions…like Rupert Murdoch, for instance.

The Australian-born media baron is surely old – 84 in just a few months – and he’s always been something of a politician and a media whore. But respectable?

Thanks to the hacking scandal and the frequent lapses of his newspapers and their editors, Rupert and respectability seem further apart than ever.

The old boy was at it again this week, firing off 140-character pronouncements that had the world groaning almost the moment they were transmitted.

In the hours immediately after the dreadfully sad conclusion to the Sydney siege, he sent this zinger: “AUST gets wake-call with Sydney terror. Only Daily Telegraph caught the bloody outcome at 2.00 am. Congrats.”

Even if he felt his Sydney tabloid had done a good job of covering a fast-breaking, multi-faceted story, for God’s sake pick up a phone or send a Twitter direct message. (Murdoch’s never been particularly good at email.)

But here he was seemingly gloating over the outcome of the appalling Martin Place events as if the only thing that mattered was its news value and the profits that might bring. No wonder he was dubbed a “gleeful ghoul” for the tweet. Twenty-four hours later, despite dozens of entreaties, he still hadn’t apologised for it.

(Ironically, I’m pretty sure employees in other arms of his Australian newspaper empire would have been upset with their boss too. Such are the cross-currents of ambition and professional jealousy within News, Melbourne’s Herald Sun execs and staff would have been ticked off their Sydney sister paper had gotten a public accolade from the boss and they hadn’t.)

Murdoch’s Twitter lapse was just the latest in a long line of them. Here are a few recent standouts, first on Egyptians:

Moses film attacked on Twitter for all white cast. Since when are Egyptians not white? All I know are.

Many UK tweeters say no terror. Admirable, gutsy, but get real and go listen at some mosques. Admit most okay, but others really scary. — Rupert Murdoch (@rupertmurdoch) May 25, 2013

What’s going on here? I have a theory: when I worked for Murdoch he had a habit of cutting off conversations with emphatic statements – this politician wasn’t up to it, that group was hopelessly wrong on this issue and, of course, Fairfax had to be put out of business.

When I think back, his pronouncements – and denouncements – were rarely more than, well, 140 characters. So of course he loves tweeting.

The problem is that within News he’s rarely challenged on his oft times wacky views. On Twitter, he gets smashed. Like this:

@rupertmurdoch Thanks for taking the time each day to tell us what to think. — Jessica Rudd (@Jess_Rudd) August 19, 2013

@rupertmurdoch That’s hilarious how can anyone think of this as anything but a parody account? #auspol #qldpol — IppieDeservesBetter (@BetterIpswich) August 19, 2013

So, should the ageing media czar stop tweeting?

God, I hope not. It’s like we are hot-wired into the brain of one of the world’s most powerful men and although it’s occasionally disappointing, even distressing, it tells us a lot about him and, by extension, others who occupy such rarefied space. Like, they’re just as ditzy as you and me.

Murdoch’s Twitter stats are similarly revealing. He’s listed as having 538,000 followers but follows only 90 accounts. They include fellow billionaires like Bill Gates – who has 18.9 million followers – but very few women. By my count there were only eight, many of them US journalists or commentators.

And Australians? As far as I could see, excluding his national daily he only follows one local: Tony Abbott. Gee, what a surprise. Abbott follows Murdoch too. But then, we knew that already.

Bruce Guthrie is editorial director of The New Daily, a former editor-in-chief of the Herald Sun and The Age, and author of the book, Man Bites Murdoch.